From performance and discursive direction to spontaneous and short videos, site-specific installations and sculptures, Hopf maintains a practice of growing diversity. Pisano's work is articulated in a range of formats such as sculpture, performance-lectures, text, and conversation. 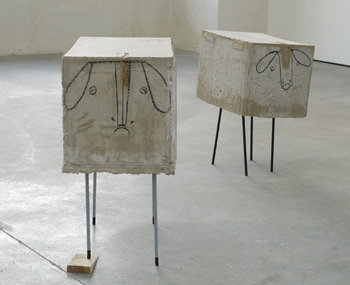 Praxes Center for Contemporary Art presents half-year cycles of consecutive exhibition modules, publications, and live activities revolving around two unassociated artistic practices. Following the inaugural exhibition Cycle with Gerard Byrne and Jutta Koether, in the coming half year PRAXES unfolds the practices of Judith Hopf (Germany) and Falke Pisano (The Netherlands/Germany). As of spring 2014, two external curators are invited to contribute to the process of collectively and critically addressing the featured artistic œuvres. For Cycle 2, curators Cecilia Canziani and Elena Tzotzi join PRAXES Directors Rhea Dall and Kristine Siegel in approaching the work of Hopf and Pisano respectively.

From performance and discursive direction to spontaneous and short videos, site-specific installations and sculptures (spanning 3D prints, found objects, and ceramics), Judith Hopf maintains a practice of growing diversity. Paired with a tongue-in-cheek attitude and deliberately slow working process, her array of work presents a playful resistance to categorization and requirements of artistic production. Often propelled by her immediate environment, Hopf has repeatedly collaborated with other artists. Taking cue from Hopf's defiance of conventions and fast turn-overs as well as her many collaborations—ongoing and new—her Cycle at PRAXES falls in four uneven measures, starting with a flock of concrete sheep from 2013. While calling attention to the venue's Brutalist architecture, the herd is also linked to the film Lily's Laptop, screened as part of the 2014 Berlinale's Forum Expanded exhibition taking place this February at the former St. Agnes Church adjacent to PRAXES.

Hopf has exhibited extensively with recent solo presentations at Studio Voltaire, London (2013), Fondazione Morra Greco, Naples (2013), Malmö Konsthall (2012), and Grazer Kunstverein (2012). Her work was featured in several locations in dOCUMENTA (13) (2012). Hopf has lived in Berlin since the early 1990s and holds a professorship at the Städelschule in Frankfurt.

Falke Pisano's work—articulated in a range of formats such as sculpture, performance-lectures, text, and conversation—circulates and reformulates ideas, language, and forms. Her long-term investigations—Figures of Speech (2006–2010), exploring discursive potential of artworks, and The Body in Crisis (2011–), tracking changing conditions of the human body in historical moments of crisis—are structured as series of sometimes subtle, sometimes confrontational transfers from one work to another, from one context to the next. Pisano's Cycle at PRAXES takes the rehearsal as its starting point, testing how the various parts of a given work series come together, while carefully dismembering, rearranging, and recomposing their content and position. This seemingly cannibalistic approach, derived from Pisano's own methods, manifests as a paced articulation in the research modules presented at PRAXES—two equally long periods of on-site investigations, titled Rehearsal I & II, and a longer stretch of simultaneously live and published semi-public/semi-private reflections, titled Rehearsal III.

Pisano recently had solo exhibitions at The Showroom, London (2013) and De Vleeshal, Middelburg (2012). Her work was included in the Istanbul Biennial (2013), the Shanghai Biennale (2012), and the 53rd Biennale di Venezia (2009). In 2013, she received the Prix de Rome. Originally from the Netherlands, Pisano lives and works in Berlin.

Cecilia Canziani is Co-director of Nomas Foundation, Rome, as well as a Co-curator of ZegnArt, a contributing editor of the magazine Cura, and a PhD researcher at the Doctoral School of History, Archeology, and Art History at the University of Naples. Canziani will collaborate curatorially in the Cycle of Judith Hopf.