In the Aftermath of Trauma

Contemporary Video Installations. The work of five video artists from around the world who employ their medium to explore individual and collective memories of traumatic occurrences. 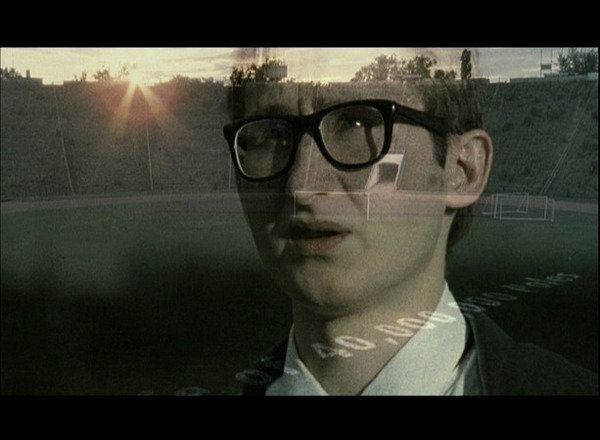 In the Aftermath of Trauma: Contemporary Video Installations presents the work of five video artists from around the world who employ their medium to explore individual and collective memories of traumatic occurrences. Utilizing a form of video art that oscillates between the documentary and the fictional, the works in this exhibition address a wide range of historical events that challenge belief in an enlightened and emancipated humanity even as they evoke deep investment in the human subject and its status in today's world. Artists included are Yael Bartana, Phil Collins, Alfredo Jaar, Amar Kanwar, and Vandy Rattana.

Israeli artist Yael Bartana's film Mary Koszmary (Nightmares) (2007) focuses on the semifictive Jewish Renaissance Movement in Poland, which calls home 3.3 million Jews, approximately the same number that died during the Holocaust. Set against an ominous sky in Warsaw's dilapidated Decennial Stadium, Mary Koszmary is a provocative act of political imagination, blurring the line between the real and the performative.
British artist Phil Collins explores trauma of a different sort in his marxism today (prologue) (2010). In the years following German reunification, few lost more than East German teachers of Marxism-Leninism. Bereft of position and ideology, marginalized by history and circumstance, these men and women were forced to begin life anew, assimilating to the capitalist West with varying degrees of success. Through a mix of personal accounts, archival film clips, and other visual materials, Collins takes a close-up look at the interplay of individual identity and political realities.
As one of four images in May 1, 2011 (2011), Chilean-born artist Alfredo Jaar employs an iconic photograph of Barak Obama, Hillary Clinton, and other top officials watching a live feed in the White House Situation Room of the raid that killed Osama bin Laden. Triggering memories while withholding actual visualization, Jaar's installation estranges the relation of political media imagery to remembered historical events.

The Lightning Testimonies (2007) by Indian artist Amar Kanwar confronts sexual violence unleashed in the chaos and aftermath of Partition of the Indian subcontinent in 1947. Encircling the viewer with interviews, archival materials, symbolic images, everyday objects, and scenes of natural beauty, this eight-channel video installation investigates how violence is resisted, remembered, and recorded by individuals and communities.
In Bomb Ponds (2009), Cambodian artist Vandy Rattana focuses on the stories and memories of contemporary witnesses of the bombing of neutral Cambodia during the Vietnam War. Today, the Cambodian landscape remains dotted with large, toxic depressions that fill with rain each monsoon season. Poised between photojournalism and contemporary art, the piece captures the stubborn endurance of memory and the gap between official accounting and personal loss.

All five installations confound expectations about truth and reality, fact and artifice, history and memory. They investigate the nature of trauma but also seek distance from it, questioning and challenging conventional notions of representation and closure.