This is not Africa, this is us

A triple exhibition and debate. Part I shows a monumental video installation by Zimbabwean artist Kudzanai Chiurai. Part II presents photos by Chiurai with works of South African artists Simon Gush and Kemang Wa Lehulere at Art Rotterdam. Part III is a series of b/w films by Gush and a chalk mural and performance by Lehulere at West's home base in Den Haag. 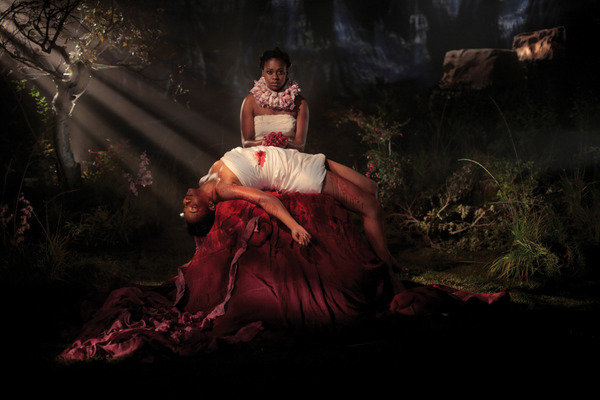 This is not Africa, this is us (Part I)
Presented by West ‘This is not Africa, this is us’ is a triple exhibition and debate taking place as part of Art Rotterdam in February 2014. Held at Kunsthal Rotterdam, Part I shows a monumental video installation by Zimbabwean artist Kudzanai Chiurai. Part II presents photos by Chiurai with works of South African artists Simon Gush and Kemang Wa Lehulere at Art Rotterdam. Part III is a series of black and white films by Gush and a chalk mural and performance by Kemang Wa Lehulere at West’s home base in Den Haag. Trying the three parts together Kunsthal Rotterdam also host a morning debate with Jelle Bouwhuis, Simon Njami, Nana Adusei-Poku, Renzo Martens, and Senam Okudzeto on Friday 7 February at 10 am.

Part I: Kudzanai Chiurai in de Kunsthal
‘This is not Africa, this is us’, is a monumental video installation comprising of three works by the internationally acclaimed Zimbabwean artist Kudzanai Chiurai. Born one year after Zimbabwe’s emergence from white-ruled Rhodesia; Chiurai’s work focuses on the political, economic, and social strife in his homeland. Chiurai works through issues of public acts of violence and sacrifice. Exhibited at Kunsthal Rotterdam the series includes the recently completed video work ‘Moyo’ alongside ‘Iyeza’ and ‘Creation’, which were part of dOCUMENTA (13) in 2013.

Part III: West, Den Haag - Kudzanai Chiurai, Simon Gush, Kemang Wa Lehulere
On Friday 7 February, Part III opens at West Den Haag, where new black and white films by Simon Gush can be found. As part of a larger examination of the correlations between labor and society, Gush’s installation highlights the vulnerability to the pressure of a Calvinist work ethic. Kemang Wa Lehulere (resident at the Rijksakademie Amsterdam) will create a new chalk mural around Nat Nakasa's work, life, exile and death. The opening will include a performance by Wa Lehulere called ‘A Native of Nowhere (A Sketch)’.
(7 February to 29 March)

Friday 7 February Morning debate moderated Jelle Bouwhuis at the Kunsthal
Held at Kunsthal Rotterdam Auditorium on 7 February 2014 at 10am, the debate connects the exhibitions of Kudzanai Chiurai, Simon Gush, and Kemang Wa Lehulere, and places issues of image creation and the utility of art in diverse settings on the table. ‘This is not Africa, this is us’ is moderated by Jelle Bouwhuis (Head of Stedelijk Museum Bureau Amsterdam) with Simon Njami (curator and critic), Nana Adusei-Poku (Lecturer at Rotterdam University), Senam Okudzeto (artist and writer) and Renzo Martens (filmmaker and artist) and Kudzanai Chiurai, Simon Gush, Kemang Wa Lehulere.

Reopening of the Kunsthal, Saturday 1 February
On Saturday 1 February 2014, the Kunsthal Rotterdam welcomes everyone from 2pm in a renovated building. The Kunsthal has been renovated and includes new sustainable elements such as technical installations. The inviting entrance area, which offers even better access to the café, shop and auditorium, strengthens the Kunsthal's enterprise culture and enriches the visitor experience.

The Kunsthal opens Saturday February 1st with a surprising and varied exhibition program. ‘S.H.O.E.S. Head over Heels' and ‘marimekko. design for a happy life' focus on design, and the photographs by Martijn van de Griendt in ‘Forever Young' depict the youth of today. On the occassion of Art Rotterdam, West and Kunsthal present a monumental video installation by Zimbabwean artist Kudzanai Chiurai as part of the tri-exhibition 'This is not Africa, this is us'. For Kunsthal Light #8, the Dutch artist Stefan Hoffmann reacts in his presentation ‘Patience’ to the renewed routing and signing in the Kunsthal.

‘The Second World War in 100 objects' and ‘Of many feathers. Seventeenth-century watercolour drawings by Andries Beeckman' can be seen from 5 February and 22 February respectively. The exhibitions are accompanied by a varied programme of activities for schools, children and students.