A new group of photographs by British artist Clare Richardson. Richardson's Sylvan series depicts a rural stretch of Romania, commonly known as the 'Saxon villages', a landscape that is expansively beautiful and historic and still farmed by pre-industrial methods. A body of new work by young Belgian artist Koen van den Broek. Van den Broek is a painter who takes space, and the experience of it as his subject matter. 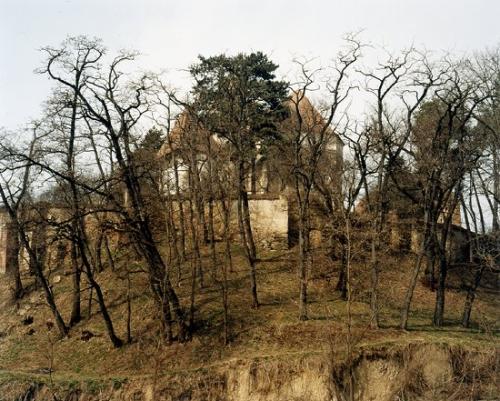 Inside the White Cube is pleased to present a new group of photographs by British artist Clare Richardson. Richardson's SYLVAN series depicts a rural stretch of Romania, commonly known as the 'Saxon villages', a landscape that is expansively beautiful and historic and still farmed by pre-industrial methods.

Richardson was initially drawn to this particular area of Transylvania through her interest in farming and the mythic potential of untrammelled nature, in particular of the narratives and folklore associated with the forest. 'Transylvania' literally means 'beyond the forest', and has been the source for much European literature from the dark fairytales of the Brothers Grimm to Mary Shelly's Dracula. The SYLVAN works developed out of Richardson's earlier series of images entitled 'Harlemville' which document a Rudolf Steiner community in rural North America whom the artist visited for periods of several months over a couple of years. In contrast to the Harlemville series - small photographs that display an unusual closeness to their subject matter and form a collective portrait of a place - the SYLVAN photographs are grand and epic in scope, recording a bountiful but depopulated landscape, without the presence of any inhabitants. Richardson visited the area at different times of the year and her images variously depict the painterly and expressive change of the seasons, from the lush verdant green of springtime, to the snowy expanses of winter.

In one image a pair of traditionally made haystacks appear like strange figurative sculptures, their anthropomorphic presence creating an uneasy folkloric aspect to the soft apple green, almost velveteen hills behind. In another work, a serpentine path winds its way from foreground to background, through a lush field dotted with grazing cows and horses, a photo that is deceptively peaceful given its unexpected mix of cattle. In some senses, with its pleasing and harmonious composition, this image becomes almost a painterly standard that can be traced through a lineage of artists from Dutch landscape painters such as Jacob van Ruidsdael through to English painters such as John Constable. In Untitled III, an ancient wooden building, with fantasy turrets and a steep, pitched roof, is half concealed by a sparse copse of trees, a kind of emphatic reduction of its own subject matter, while at the same time, evoking a sense of discovery and of something hidden. In another work, a series of pitched roofs are gathered to one side, appearing rhythmically in their setting, flattened out like a Japanese landscape print.

Although these pictures are taken in a precise locale, the countryside depicted can be seen as an Arcadian ideal, referring back to a number of politicised and epic landscape portrayals by artists such as Corot, Poussain and Courbet. Although quiet and unassuming, the blankness and beauty of these images conceal a turbulent history, one that is inscribed with a sense of emotional loss. For Richardson, they were the culmination of a 'search for an elusive idyll...a landscape of collective childhood imaginings where the forest and what lies beyond is unknown'. Here the landscape becomes a metaphorical shelter, an escape from the disenchantments of the modern urban world where the 'SYLVAN' is an ideal, a place where the imagination and reality conjoin.

Clare Richardson has participated in group exhibitions in both London and America and most recently had a solo exhibition at the Towner Art Gallery in Eastbourne.

Image: a work by Clare Richardson

Harlemville, a new catalogue published by SteidlMACK will be available during the exhibition.

Inside the White Cube is open from Tuesday to Saturday, 10am - 6pm. For further information please contact Honey Luard or Susannah Hyman on 020 7930 5373.

White Cube is pleased to present a body of new work by young Belgian artist Koen van den Broek. Van den Broek is a painter who takes space, and the experience of it as his subject matter; primarily painting abstract or semi-abstract compositions derived from snapshots of very ordinary architectural motifs, such as the kerb of a road, the grid on a sidewalk or the stop barriers of a parking lot. Using photography as his starting point, he evolves a clear, stripped down, painterly language, using sober, neutral colours punctuated by the occasional instance of blood red, bright orange or pitchy black. Scrubby washes of paint in thinly applied hues, work towards an implied conclusion, the approximation of a figurative image.

Van den Broek frequently travels through America, and its culture of driving, as well as the sparseness of its vast tracts of land seep into his work. Moving on from his Border series - which employed vertiginous lines set on the diagonal, diverting the viewers gaze to the outer edge of the painting, and in so doing, reminding the viewer of its function as a liminal container - these works are more figurative, depicting bereft and distant landscapes as well as cropped and partial street signs, where the ground looms up at the viewer, activating the experience of looking.

Van den Broek's work invests the sense of looking with renewed energy, opening up to the viewer the experience of a visual sublime. At the same time however, his works are humble and direct in their parameters, choosing subjects that are straightforward, clichÃ©d even, such as the vanishing stretch of highway, or the brilliant gold of an autumnal tree. Railroad (2002) is an image of a highway bridge, stretching horizontally across the painting, a dividing device which crops the picture in two, the sky above and the the ground below melting and re-emerging out of a myriad shades of white and grey. In the middle of the picture, the structural support of the bridge is outlined in black, an anchoring device that is a frequent motif of the artist's work. Likewise, San Luis Potosi (2003) is evidently a painting of a truck parked in a lot, but the truck itself is pushed to the outer edge of the picture, the great expanse of ground becoming the real subject, with sinister dark shadows like black liquid seeping over the canvas surface.

Van den Broek's series of four border paintings, entitled Shadows and Blue Border (2003), push the level of abstraction from his photographic source to it's furthest point. Seering midnight blue stripes, veering at different angles from the bottom to the top of the canvas, split and unite the composition, in the manner of Clifford Still's zip paintings. The blue line, perhaps the edge of a kerb, is followed by a deep black shadow, a kind of vacuum or trench where void and solid is flattened out.

The artist frequently talks about blankness in relation to his work, and the notion of space, both actual and metaphorical is a frequent subject in his paintings. Garage (2002) for example, is, in its simplest form, a painting of a garage door, but the liquid pale turquoise of its square rolling door becomes a central void, a point for the eye to enter and yet formed of nothing. Likewise, Sidewalk #2 (2001) is a rendition of a dingy corner of a back street, but the ground disappears in front of our gaze in a muddy white wash, the walls of the building an emerald green. This procedure, of setting up visual expectation, of painting emphatic optical directives with no point of summation is what makes the artists' work so compelling.

Koen van den Broek has exhibited in several group exhibitions internationally and has had solo exhibitions within Europe.
A full colour catalogue, with text by Jennifer Higgie, will be available to coincide with the exhibition.

White Cube is open from Tuesday to Saturday 10am - 6pm. For further information please contact Honey Luard or Susannah Hyman on 020 7930 5373.