'Within the Light Trap: Cruz-Diez in Black and White' shows the photographic works of this renowned abstract artist. Although internationally recognized for his chromatic research, Cruz-Diez's formation began with an in-depth interest in mechanical reproduction techniques that included black-and-white photography. 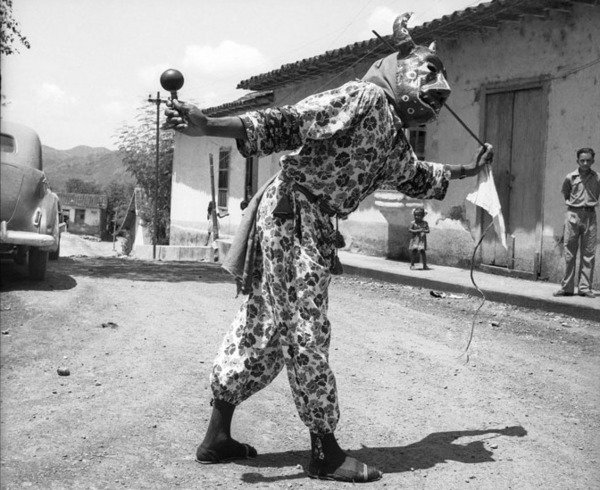 Americas Society is pleased to present Within the Light Trap: Cruz-Diez in Black and White, the first exhibition in New York and in the U.S. to show the photographic works of this renowned abstract artist. Although internationally recognized for his chromatic research, Carlos Cruz-Diez's formation began with an in-depth interest in mechanical reproduction techniques that included black-and-white photography. As a teenager he built a pinhole device that consisted of a frontal lens attached to a wooden box. Cruz-Diez developed his skills by learning from Venezuelan street photographers who worked in local plazas—they were called minuteros as they revealed the prints within minutes. Shortly after, he acquired a Rolleiflex camera, which in the 1940s he used systematically to capture everyday life as well as to document vernacular culture and folklore, subjects central to the debates that characterized his generation in Venezuela. He would then develop the photographs and bind the prints to create intimate personal albums.

Cruz-Diez traveled throughout the then rural Venezuela that was on the brink of modernization and social economic transformations brought by oil. His photographs undertake an ethnographic mapping, capturing the emergence of shantytowns in Caracas, and infrastructure developments. They also document the richness of music and folkloric dance traditions celebrated throughout different communities. Reflecting the racial and class diversity and cultural hybridity of the country, these images show a distinct local vernacular that was not explored by artists until much later. Some of the photographs look at syncretic traditions such as El Velorio de Cruz de Mayo (The Wake for the Cross of May), which consisted of prayers, fulias (call-and-response songs) and décima poems asking for good crops, health for the sick, and protection against evil.

Within the Light Trap: Cruz Diez in Black and White includes nearly fifty exhibition and vintage prints, as well as vintage albums, drawings, illustrations, books, and documents spanning from the 1940s–1950s. Some of the photographs on view include La Burriquita (The Little Donkey), a dance performed during the Christmas season in Venezuela in which a male dancer dressed as a woman parades through the streets pretending to ride a donkey. As well as Los Diablos de Yare (The Devils of Yare) a religious feast celebrated on Corpus Christie Day that represents the struggle between good and evil. The recording of these vernacular traditions was linked to Cruz-Diez's realist project, which he abandoned by 1954 to fully embrace abstraction.

The artist has publicly acknowledged his creative debt to photography as an important foundation for helping him shape his research on color. "What fascinated me...was the light trap, the fact that with light and black and white one can do those things." Cruz Diez's fascination with the transformative possibilities of color and its projection to space is also rooted in his study of the technical processes of film and printmaking. This consistent knowledge was perfected in the "Fisicromías" series (1959), two-dimensional abstract works organized through a chromatic scheme, and later culminated with the Cromosaturación (1965), in-situ environments conceived as participatory experiences of color in space.

The exhibition is accompanied by a hard-cover, bilingual publication titled Cruz-Diez in Black and White. Edited by The Cruz-Diez Foundation, the book includes the artist's black-and-white photographic work from the early days of his life in Venezuela to his travels in Europe and Asia, along with texts by Carlos Cruz-Diez and Edgar Cherubini Lecuna.

The exhibition Within the Light Trap: Cruz-Diez in Black and White is made possible by the generous support of Chevron as Lead Sponsor. The winter 2014 Visual Arts Program is also supported, in part, by public funds from the New York City Department of Cultural Affairs, in partnership with the City Council.