The Museum of Contemporary Photography 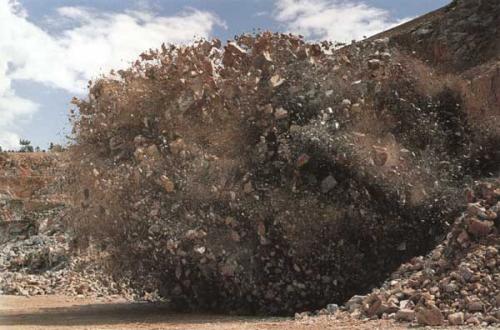 December 11, 2003 through February 19, 2004
This exhibition explores the work of four contemporary artists concerned with the symbiotic relationship between nature and man. Mark Ruwedel's series entitled The Ice Age records the evidence of both prehistoric and contemporary cultures that have left visible marks along the ancient shores of Lake Manly, a Pleistocene Lake that is now Death Valley. Naoya Hatakeyama's photographs of limestone factories and quarries depict the scarring and blasting of Japan's hills and mountains in a country with few natural resources. Toshio Shibata photographs cement dams, wire nettings, and erosion prevention to look at how man attempts to restrict the course of nature. Dan Holdsworth presents his large-scale photographic triptych Black Mountain. Taken at the edge of the Vatnajokull glacier in Iceland, this mammoth piece represents an abstract surface of black and white mountains, permeated with almost imperceptible yet intense fragments of color, which in reality is a fragile mass of ice and volcanic debris at the point of collapse.
Few themes have inspired artists more than the dialectical relationship between nature and man. In Western art since the late eighteenth century, the romantic notion of the sublime competes for space with the spirit of human endeavor. On one hand, humans are weak and in awe before the power of nature, and on the other, they are energetic and domineering builders, diggers, and settlers.
Civilizations grow and intrude upon nature, relying on her bounty. Then they peak and decline, leaving few marks, and nature reclaims its own. The process cycles on, perhaps hastened by contemporary technology, serving as a constant reminder of the durability and fragility of both nature and mankind.

This exhibition explores the work of four contemporary photographers concerned with how nature and man challenge and consume each other. Mark Ruwedel (United States, born 1954) records the evidence of both prehistoric and contemporary cultures that have left visible marks on the earth's surface. Toshio Shibata (Japan, born 1949) documents how man attempts to control nature with artificial structures. Naoya Hatakeyama's (Japan, born 1958) photographs extractive industry in Japan, a country with few natural resources. And Dan Holdsworth (United Kingdom, born 1974) explores the always deceptive nature of landscape photography with images of the Vatnajokull glacier in Iceland.

For over twenty-five years Mark Ruwedel has photographed sites in the American West where historical and contemporary marks on the land exist as a geographical palimpsest. He enjoys the irony of our celebrating and preserving the scratchings of prehistoric cultures on the land, while we decry the ways in which we alter our environment today. Combining photographs of ancient trails and remnants of 12,000-year-old ceremonial sites with modern tire tracks and roads, Ruwedel questions how different these intrusions really are. His ongoing body of work entitled The Ice Age is photographed along the relic shores of dried glacial melt lakes, including Lake Manly, now Death Valley. Because of the extremely arid climate in the Basin and Range Region, nature's reclamation of both human and natural processes takes thousands of years -nineteenth century rail lines crumble side by side with ancient foot paths. Both remnants are evidence of the most advanced technology of the time, yet quite different in their impact on the land. And while the cultural resources expended on a trail and on a railroad are vastly different, they are disappearing at the same rate in this environment.

Toshio Shibata's dramatic black-and-white photographs, taken in Japan and the United States, provide evidence of complex hydraulic and highway engineering feats molded in part by the natural forms they inhabit. Population growth, industrialization, and urbanization have been accompanied by considerable growth in demand for electricity and mass transportation networks. This requires the construction of colossal dams and roads in inhospitable terrain - on steep slopes, through mountains, over water. Seen through Shibata's large-format camera and wide-angle lenses, these colossal industrial structures confuse our sense of mass and volume, and our ability to orient the subject in relation to human scale. Shibata focuses our attention on the front line of the hostile encounter between nature and the needs of industrialized societies, but the pure beauty of the photographs places man in awe of the structures, parallel to the early Romantic relationship of man and nature. The impressive grandeur of man's constructs is qualified by their conformity to the curves of the landscape, as if nature were directing the project.

The construction of our increasingly urban environments has required the extraction of massive amounts of nonrenewable resources, and Naoya Hatakeyama's pictures of quarries in Japan show us where these materials originate. Two hundred millions tons of limestone -one of the few natural resources in which Japan is totally self-sufficient -are taken every year from diverse sites for the manufacture of cement and asphalt. This has resulted in the excavation of countless hills and mountaintops where, from Hatakeyama's bird's-eye vantage point, the quarries now resemble open wounds on the earth's surface. In his recent Blast pictures, Hatakeyama enters the quarries on the ground to capture the detonation of explosives intrinsic to the mining process. These photographs very effectively dramatize the instantaneous undoing of rock formations tens of thousands of years old. While the unchallenged human capacity for destruction is clearly the subject, the vantage point is cleverly selected so that rubble appears to threaten the artist and, by extension, the viewer.
Human vulnerability to nature's forces is more openly a theme in Dan Holdsworth's mammoth triptych, Black Mountains. Running twenty-two feet long and six feet high, this immense photograph at first glance represents a static, immovable landscape -a sublime and powerful mountain range. However, what appears to be snow-covered, black rock with almost imperceptible fragments of color in the foreground is in reality a fragile, tumbled mass of ice and volcanic debris. Our sense of awe diminishes with the knowledge that the ice is melting, and that what seems to be grand and permanent is in fact quite temporary. Holdsworth's photograph is taken at the edge of the Vatnajokull glacier, which is Europe's largest, covering eight percent of Iceland. Active volcanoes under this mass of ice cause powerful floods, which continuously change the shape of the glacier and the surrounding terrain. This natural dynamic in turn makes the surrounding area unsuitable for human settlement, and provides a different perspective of man's relatively meager ability to re-form the earth when compared to natural forces.

Photography seems particularly well suited to document the oscillation of human celebration of nature between religious temple and mining district. Perhaps because, unlike painting, the camera must deal with what is in front of it, the record of these two human responses to nature is peculiarly amoral. In the latter half of the nineteenth century, Carleton Watkins had no qualms about photographing the sublime grandeur of the Yosemite Valley one week, and the massive human destruction of the gold mining district in the upper Sacramento Valley the next. Similarly, the artists in this exhibition avoid either simple, ecologically correct, or romantically sublime statements about nature or man. They prefer to observe a more complicated exchange.

Terry Evans
For the entirety of her career, Terry Evans has been photographing the prairie, from its natural, untouched state to its development, use, abandonment and care. Photographing from both ground and aerial perspectives, she focuses on the issues of specific places and how ecological, economic, agricultural, and cultural patterns physically shape the landscape. As her documentation ranges from responsible land maintenance like cattle rotation and erosion prevention to careless industrial pollution in her aerial pictures Evans's is consistently interested in the tension between specificity and abstraction. The distanced perspective offers a more wide-reaching and revealing view of the landscape but at the same time a more formally beautiful and detached one. Her images clearly articulate this duality inherent in the relationship between the landscape and those who live in it. Currently, Terry Evans lives and works in Chicago and frequently guest lectures at Columbia College Chicago.

Paul Clark
Paul J. Clark has been photographing community gardens for almost ten years, however, he rarely includes evidence of their urban and suburban contexts. Instead, he focuses on the details contained within these sanctuaries, creating poetic visual metaphors for our complex relationship with nature. Often revisiting the same places, his images become witness to the passage of time and the ever-changing relationship between the vegetation and the man-made structures designed to control and support it. Grids of wire become intricate arrangements when stacked together, while rigid wooden stakes and supports appear weak and overwhelmed by the growth they were meant to support. Reducing his subjects to minimal forms and lines, Clark's photographs become analogs of the meditative atmosphere in which they are created, their thin black borders highlighting the physical and psychological enclosure that gardens offer. Using both a clean, graphic style as well as an intimate and at times romantic one, Clark invites the viewer to experience these spaces as both formally beautiful and emotionally rich.
Marci LeBrun
Curatorial Assistant

Tom Bamberger
Tom Bamberger's digitally created panoramas are inspired by one question - how far can the horizon line of an image be convincingly extended? Attracted to inherently repetitious scenery - housing developments, farmland, highways, vineyards - Bamberger seamlessly extends these landscapes by drawing and repeating information from single negatives. He likens the process to cultivating a virus, explaining that, "in either a computer or a Petri dish, something reproduces itself until it reaches a critical mass where you can see it with greater clarity." As the landscapes grow and the repetition becomes more easily identified, his questioning becomes more complicated. How natural or artificial are these images when repetition is intrinsic to these subjects to begin with? Bamberger then works with the cloned imagery, removing the limb of a tree, or adding a window to a house, in an effort to mimic the subtle diversity already existing in these scenes. By blurring the line between his digital alterations and the existing shape of the landscape, Bamberger questions the nature of repetition, arguing that there is little difference between, for example, DNA's reproductive process in a forest or field and the computer cloning that his work depends on.