On show the group exhibition "Sensitive Instruments" and, in the main gallery, "Violet Fogs Azure Snot" with new paintings by Molly Zuckerman-Hartung. 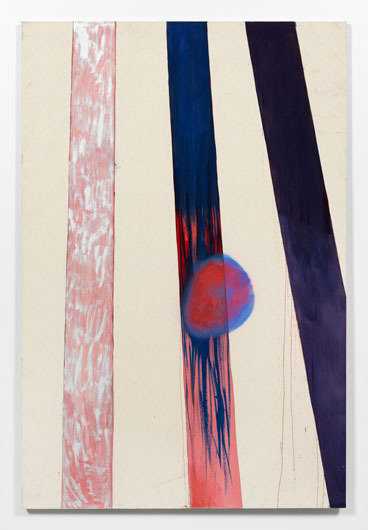 “…although the introduction asserts that the Young-Girl is evidently not a gendered concept…the fact that this book… does become—a book about women. With everything biological and constructed the term women signifies. A book about us. So I’ve already said that translating this book made me sick. I mean it gave me migraines, made me puke… I don’t know why I’ve been hesitant to say this publicly. Something about wanting to perform like a normal translator, to honor the laws of hospitality, to be a good steward to this thing I worked hard on, to be dignified in only the most ordinary way. But actually when I read the book now, in English, it passes through me pretty pleasurably. I feel in effortless agreement with most of it; it’s fun to read…. like something colonized, I’ve gotten used to my position vis-à-vis the master and what it expects from me; I’ve learned to whistle while I work.”
Ariana Reines from the translator’s introduction to Theory of a Young Girl by Tiqqun

“Since the Saturnine temperament is slow, prone to indecisiveness, sometimes one has to cut one’s way through with a knife. Sometimes one ends by turning the knife against oneself.”
Susan Sontag from Under The Sign of Saturn

In the main gallery, Corbett vs. Dempsey is pleased to present Violet Fogs Azure Snot, an exhibition of new paintings by Molly Zuckerman-Hartung. The exhibition is accompanied by a full-color, 80-page catalog. In the East and West Wings, Molly Zuckerman-Hartung has invited nine artists to exhibit works in a show titled Sensitive Instruments, in tandem with a CAA panel of the same name.

In her second solo exhibition at Corbett vs. Dempsey, Zuckerman-Hartung unveils ten new paintings, almost all of them larger than her previous work. Since her 2012 exhibition at the Museum of Contemporary Art Chicago, she has been gradually pushing her multiform works in scale, stretching out, and exploring space. This is true not only in square inches, but also in terms of the way the paintings look – new pieces deploy a softer palette, stretches of unmodulated color and pattern, as well as moments of violent action and her trademark humor. Many of the works include swatches of fabric with sewn segments; Zuckerman-Hartung explores the fold in all its material and metaphorical dimensions. The extensive exhibition catalog doubles as an artist’s book, with a deep portfolio of photographs taken, chosen, and montaged by Zuckerman-Hartung.

The last few years have been exciting for Zuckerman-Hartung. She has exhibited in solo and group shows in Oakland, Milan, Berlin, Milwaukee, New York, Karlsruhe, Los Angeles, Düsseldorf, Athens (Greece and Georgia), Cleveland, and Miami, and was included in the Walker Art Center’s Painter Painter exhibition. In March, she will participate in the 2014 Whitney Biennial.