Roman Signer presents numerous installations and sculptures, as well as one photographic work; the viewer encounters elements such as sand, air and water. Guillermo Kuitca presents a suite of graphite works on canvas. L'Encyclopedie Nos. I, II, III, IV, V, VI is part of an ongoing series which derives from the Enlightenment's Encyclopedie, edited by philosopher Denis Diderot. 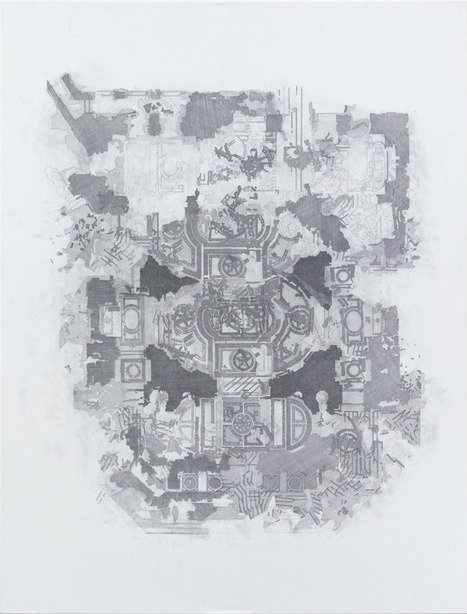 Hauser & Wirth is pleased to present an exhibition of works by Roman Signer in its Zurich space. Since the 1990s, Signer has been considered one of the most important Swiss artists on the international scene. Through happenings and installations, he has been re-defining sculpture for more than forty years. He incorporates time and change into the artistic process, exploring the possibilities of the sculptural medium. Although Signer first achieved artistic notoreity by using explosives, it is primarily the unspectacular and subtle aspects that best characterise his work.

This solo exhibition in Zurich presents numerous installations and sculptures, some created specially for the exhibition, as well as one photographic work. The viewer encounters elements such as sand, air and water, as well as objects with which the artist has long been associated.

It would appear that Signer’s days are never boring: he is instantly fascinated by the simplest things, including everyday objects like umbrellas, bottles and candles. He endlessly exploits the possible uses and limitations of these objects, which requires both curiosity and discipline, at times even a slight risk. Signer plays with time, and underscores its ability to transform things. Like the director of a thriller, he makes use of tension and surprise – with the distinction that in his case everything takes place in the here and now: no script, no rehearsals, no cutting. The works are the direct result of processes initiated by the artist.

In the sculpture ‘Kerzen, Ausgeblasen’ (Candles, Blown Out) (2013), a vacuum cleaner extinguishes some of the burning candles and thereby prevents their melting; the resulting sculpture clearly relates the to original event:

“They are works that come into being and pass away. And for me it is the in between that matters, not only the result: not the aesthetic aspect but rather the process.” 1

Roman Signer’s attitude is that of the humble observer, as though the reality of things can only be revealed by letting them take their natural course. His actions may provoke a reaction, but ultimately the result is always determined by patience and his commitment to non-intervention. In this sense the artist is just as much a viewer of his work as we are. This is perfectly apparent in the photo series ‘Tisch mit Raketen’ (Flying Table with Rockets) (2013). The course of the experiment is in part predictable, but the end result is a surprise that the artist himself awaits with suspense.

‘Wasserfall’ (Waterfall) (2013) analyses the 115-foot-tall and astonishingly symmetrical Appenzell Lauenfall in five projections, and is an expression of Signer’s close connection to his native landscape.

‘Wasserrinne mit vollen und leeren Flaschen’ (Water gutter with full and empty bottles) (2013) presents a row of glass bottles of identical size, whose height is rhythmically determined by the different degree to which they are filled. This is a clear example of two recurring early Signer themes: weight and falling height. Again and again the artist deliberately deploys natural forces as formative elements.

Roman Signer is well aware that the life of nature proceeds without his assistance. His observant stance allows him to listen to it, and in contemplating his work we listen as well. To understand his works, it is necessary to summon up an ability we have largely lost, namely the gift of seeing things not as being self-evident but with a virtually childlike naivety and curiosity.

From June to October 2014 the Kunstmuseum St. Gallen is presenting a comprehensive exhibition of his work.

Guillermo Kuitca (b. 1961, Buenos Aires) is one of the most pre-eminent artists working in Latin America today. He draws on a range of iconography including architectural plans, maps, theatres, musical scores and domestic spaces. His work explores themes of structured absence, sound and silence and the tension between the empirical map and abstract form.

On the second floor of Löwenbräu, Kuitca presents a suite of graphite works on canvas. ‘L’Encyclopédie Nos. I, II, III, IV, V, VI’ is part of an ongoing series that Kuitca began in the late nineties, which derives from engravings of architectural floor plans illustrated in the Enlightenment’s ‘Encyclopédie’, edited by philosopher Denis Diderot. The utopic vision of the 18th century ‘Encyclopédie’ – to accumulate and record all knowledge – seems ever closer to being realised today with all-encompassing and constantly expanding digital libraries and online archives. In conversation with Hans-Michael Herzog, Kuitca says:

‘I am interested in the major contradiction between a medium like painting, which is so specific and partial, and the abyss of an enormous collection of things’.

In early ‘L’Encyclopédie’ works, Kuitca transforms facsimiles of marble floor plans, displacing ink on the canvas surface with water, dissolving the architectural details and rendering the marble structure fluid. The titles of these early works reflect the monumental buildings they are drawn from as described in Diderot’s ‘Encyclopédie’, such as ‘Untitled (Marble Flooring Plan of Val-de-Grâce, Paris)’, which was included in Kuitca’s solo exhibition at Fondation Cartier pour l’art contemporain, Paris in 2000.

In the early 2000s, Kuitca began manipulating the same facsimiles, but printed on coated photographic paper. The surfaces appear to be at once exploding and collapsing, which is actually the result of a delamination of the multiple layers of paper, causing fragments of the image to break up, drift away, and then re-attach themselves. These ruptured plans are meticulously transposed onto canvas in graphite. The slow motion dissipation across the canvas brings to mind the mesmerising closing sequence of Michelaneglo Antonioni’s 1970 cult film ‘Zabriskie Point’, which depicts exploding building debris emitting to the edge of the frame.

‘L’Encyclopédie Nos. I, II, III, IV, V, VI’ denotes Kuitca’s interest in sequence signifying time and alludes to movements of a musical score. The original architectural reference is removed from the title completely and silence permeates these diagrammatic graphite renderings.

In 2009, the Miami Art Museum, Miami FL hosted a major survey of Kuitca’s work, ‘Guillermo Kuitca: Everything, Paintings and Works on Paper, 1980 – 2008’, which travelled to the Albright Knox Art Gallery, Buffalo NY (2010), the Walker Art Center, Minneapolis MN (2010) and the Hirshhorn Museum and Sculpture Garden in Washington DC (2010 / 2011). In 2007, Kuitca represented Argentina at La Biennale di Venezia. In 2012, Kuitca presented a solo exhibition ‘Diarios’ at The Drawing Center, New York NY which toured in 2013 to Eli and Edythe Broad Art Museum, Michigan MI and Museum of Contemporary Art, Denver CO. In 2013, Kuitca was the second artist in residence at Hauser & Wirth Somerset, where he produced a permanent site-specific installation. In July 2014, Pinacoteca do Estado de São Paulo will present a major retrospective of Kuitca’s work which will run through the Bienal de São Paulo.