An overview of the artist's oeuvre based on the different studios where he worked and lived. The exhibition brings together nearly 80 canvases, 60 drawings and prints, 20 photographs and more than a dozen of the artist's palettes. Contemporary an exhibition dedicated to the drawings of Jacopo Carracci (1494-1557), better known as Pontormo and considered one of the greatest exponents of Mannerism. 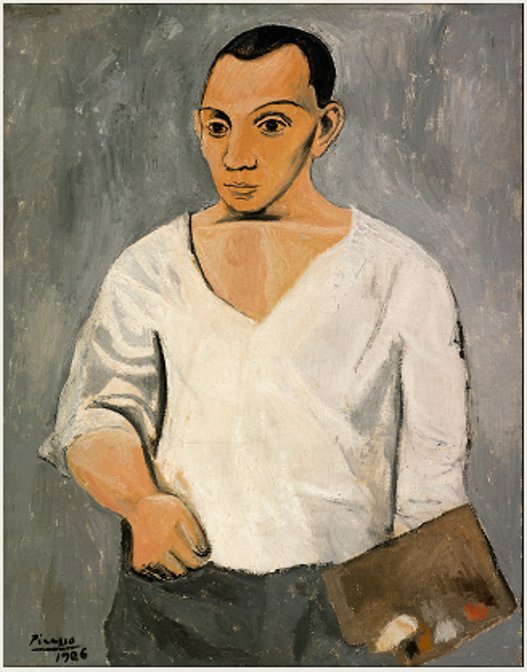 From 12 February to 11 May 2014, FUNDACIÓN MAPFRE'S exhibition halls (Paseo de Recoletos, 23, 28004 Madrid) will host the show entitled PICASSO: IN THE STUDIO, an overview of this artist's oeuvre based on the different studios where he worked and lived.

The exhibition brings together nearly 80 canvases, 60 drawings and prints, 20 photographs and more than a dozen of the artist's palettes which show how Picasso's studio became the centre of gravity of his entire creative universe, the place where art and life were interwoven in his work.

Picasso: In the Studio contains pieces from around 25 prestigious public and private institutions. Many of the works were loaned by private collections and have rarely been publicly exhibited, making this show a unique opportunity to enjoy them. The exhibition has also been made possible thanks to the support of major museums in Spain and abroad, including the Philadelphia Museum of Art, the Cleveland Museum of Art, the Indiana University Art Museum, the Phillips Collection (Washington, DC), the Centre Georges Pompidou (Paris), the Tate (London), the Israel Museum (Jerusalem), the Bridgestone Art Museum (Tokyo), the National Museum of Modern Art (Kyoto), the Pushkin State Museum of Fine Arts (Moscow), the Museo Nacional Centro de Arte Reina Sofía (Madrid) and the Museu Picasso (Barcelona).

The show opens with the famous Self-portrait with Palette from 1906 (Philadelphia Museum of Art) and closes with another self-portrait from 1969, Homme au tabouret, whose only public showing was in the first exhibition held at the Palais des Papes d'Avignon in 1970. These two works, in which Picasso depicts himself as a painter, gazing fixedly at the viewer, are separated by more than 60 years of artistic activity, during which the artist worked at different studios in the Bateau-Lavoir, Boulevard de Clichy, Boulevard Raspail, La Boétie, Boisgeloup, La Californie and finally Mougins. In every case, his studio became a place for experimentation and a stimulus of reflections on the artist's work and ritual in pictorial tradition. His studios became "interior landscapes", as Picasso called them, inner sanctums that chronicle the history of his stylistic and iconographic mutations.

A scientific catalogue has been published to accompany this exhibition which contains reproductions of every work in the show and offers an in-depth analysis of the importance of the studio as a place of experimentation for Picasso. The catalogue features original essays by Maite Ocaña, Brigitte Léal, Valeriano Bozal, Christopher Green, Neil Cox and Leyre Bozal.

From 12 February to 11 May 2014, FUNDACIÓN MAPFRE'S exhibition halls (Paseo de Recoletos 23, 28004 Madrid) will host an exhibition dedicated to the drawings of Jacopo Carracci (1494-1557), better known as PONTORMO and considered one of the greatest exponents of “Mannerism”.

The show will feature a carefully chosen array of 69 drawings—the majority loaned by the Galleria degli Uffizi in Florence, though other prestigious European museums such as the Staatliche Graphische Sammlung in Munich and the Vienna Albertina have also contributed to this selection—which document every stage in Pontormo's career and all the different drawing media he used.

The exhibition consists of 60 drawings by Pontormo as well as nine drawings by other great artists such as Dürer, Lorenzo di Credi, Poussin and Tiepolo, which have been included so that visitors can compare and contrast their different approaches to draughtsmanship and appreciate the originality of the Florentine artist's style.

The selected drawings will also be accompanied by a rare gem: Pontormo's Diary, held at the Biblioteca Nazionale Centrale in Florence, which has never been shown outside Italy until now. This journal contains writings and small sketches by the artist, created during the last years of his life, about his obsessions, his routines and his desire to draw in seclusion, and as such it is a unique testament to the legend of Pontormo as an artiste maudit.

This will be the first show of Pontormo's work ever held in Spain, organised to coincide with the 520o anniversary of the artist's birth. Meanwhile, in March the Palazzo Strozzi plans to inaugurate an exhibition about Pontormo and his friend Rosso Fiorentino that will focus on his paintings. Thus, Florence and Madrid have joined forces to celebrate this singular commemorative year.

This exhibition is further proof of the particular importance that FUNDACIÓN MAPFRE attaches to drawing, as the only Spanish institution whose art collection is dedicated exclusively to works on paper and which regularly organises shows featuring this genre.

Pontormo ranks among the most extravagant and extraordinary artists in the history of art. His obsessive, neurotic personality and wild mood swings, documented by Vasari, soon earned him a reputation as an artiste maudit. Pontormo's astoundingly prolific corpus of drawings, primarily held in the Gabinetto Disegni e Stampe degli Uffizi, has contributed to the aura of legend surrounding this artist, as many consider his works on paper to be the expression of the painter's prima idea, concentrating the essence of his tortured soul. It seems undeniable that Pontormo used the paper format to explore ideas and work out his goals for more ambitious undertakings; however, he also turned to drawing as a pleasurable outlet for pent-up emotions, a kind of relaxing treat for the spirit.

With regard to technique, Pontormo primarily used black and red pencil, almost always with white chalk, but he also experimented with ink, bistre and washes, and for more detailed drawings he preferred to use sanguine crayon. The fact that Pontormo trained alongside great Italian Renaissance masters allowed him to experiment with different ways of drawing. His early apprenticeship to Leonardo da Vinci taught him to appreciate drawing as an exercise in private creativity, where an artist could express himself more freely.

Pontormo's contact and later empathy with Piero di Cosimo encouraged the artist to develop his powers of imagination and fantasy. During his time at the Certosa di Galluzzo, while still absorbing the drawing techniques of his masters, Pontormo came across the prints of Albrecht Dürer, which his friend Rosso Fiorentino had already discovered, and the influence of this German master would become apparent in his preparatory studies for The Crucifixion. Andrea del Sarto, with whom Pontormo completed his first major public commissions, later became the greatest influence on his work. During his final years, while working on the project for the Church of San Lorenzo, Pontormo's drawings acquired a grandiose spirituality reminiscent of the style of Michelangelo. The drawings in this exhibition cover every stage in the artist's career, from his work as an apprentice at Poggio a Caiano (1519-1521) to his final creations for the Church of San Lorenzo in Florence (1545-1556). Exemplary illustrations of Pontormo's early and late styles are present in his preparatory drawings for the works at the Certosa di Galluzzo (1522-1525), and his designs for the Capponi Chapel in the church of Santa Felicita (1526-1530).

The most important drawings in the show are those related to the Church of San Lorenzo in Florence. Pontormo worked almost exclusively on the project for this religious building from 1545 until his death in 1556. Cosimo I de' Medici commissioned him to devise eight scenes, seven from the Old Testament and one from the New, to decorate the architecture designed by Brunelleschi. Throughout this project, Pontormo eschewed a temporal presentation of the scenes, striving instead to create symbolic contrasts that reinforced his ideas about faith.

His drawings from this period portray different versions of the same story and were treated as isolated compositions. Thanks to this approach, we can see how the scenes developed and matured in the artist's mind, and how drawing gradually became the channel through which Pontormo expressed different views of these intensely spiritual subjects.

In terms of their plastic quality, the San Lorenzo drawings illustrate the extreme Mannerism that characterised Pontormo’s final years. Nowhere is his use of the S-curve and mind-boggling distortions more striking or glorious than in his studies for the Flood and the Resurrection. These works are the silent screams of a deeply spiritual, painter who strove to express his anguish, dissatisfaction and constant quest for God.

While preparing this final commission, between 1554 and 1556 Pontormo kept a detailed diary in which he jotted down his daily routines, meals, aches and pains and other mundane information. However, the Diary also records his fear of death, his deep-seated spiritual convictions and the desire to find release for his soul through pencil and paper. The critical fortune of this Diary has always been linked to the perception of Pontormo as an artiste maudit. Now, for the first time, it is leaving Florence to appear in an exhibition.

A scientific catalogue has been published to accompany this exhibition which contains reproductions of every work on display, with complete catalogue details for each, and essays by the show's curator, Kosme de Barañano, Pablo Jiménez Burillo and Benito Navarrete. The catalogue also includes a Spanish translation of Pontormo's Diary by Isabel Prieto and a biography and bibliography of the artist.