Sonia Almeida engages the limits of abstraction and how elements traditionally associated with other mediums and disciplines can be operative in painting. Mirra and Karel present a quadraphonic sound installation. Hans Op de Beeck's various works across mediums show the viewer non-existent but identifiable places, moments, and characters that appear to have been taken from everyday life. 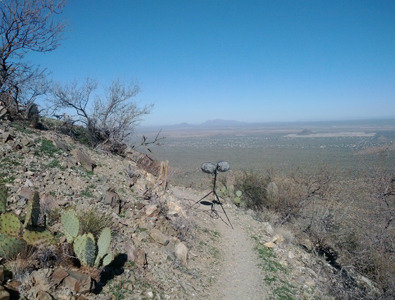 The work of Sonia Almeida explores the disjunction between our sensory experience of color and the ways in which the scientific analysis of color is thought to provide facts about reality. In doing so, Almeida engages the limits of abstraction and how elements traditionally associated with other mediums and disciplines can be operative in painting.

Stacking π and Dismantling π relate the Greek origins of Western thought on abstraction to the symbol π, used to symbolize the ratio of a circle's circumference to its diameter and which represents an infinite string of numbers. "What can be more abstract," Almeida notes, "than the idea of the infinite in a mathematical constant?" A number of her works also connect to ancient color theory and the belief that all color arises from a mixture of black and white.

By looking to how painting can share in the codes or norms of other art forms, Almeida's work serves as a type of "re-mediatization." Screens or projections, most often associated with film, are operative in her leaning floor pieces, such as Blue Filter, and in her paintings backlit by LEDs. Forward/Play/Pause and Silver Screen also relate painting to moving images by connecting archetypal forms, such as the vessel, to icons for media interaction, which taken together support an experience of continuity between discontinuous objects and temporalities.

Almeida often translates forms and concepts explored through her sketchbooks into other supports. These sketchbooks, a selection of which are on view, draw forth her interest in the relationship between translation and the loss of information as a visual and temporal phenomenon, much as precise colors cannot be reproduced when converting between color spaces that occupy different subsets of the visible spectrum.

For a number of years, Helen Mirra has been walking in different parts of the world as a means of generating works. Often the materialized aspect is a kind of paced printmaking or terse field notes she makes at intervals over the course of the day, and in some cases, Mirra and Ernst Karel collaborate on hourly location recordings. Hourly directional sound recording, Mata Atlântica, Brazil (2012) is a quadraphonic sound installation by Mirra and Karel composed of location recordings made during eleven days of walking in remnants of coastal rainforest in southeastern Brazil.

Stopping once each hour, Mirra and Karel used a compass to locate magnetic north. Two consecutive one-minute stereo recordings were made by holding microphones at the ends of outstretched arms, the first with arms out to north and south, and the second with arms out to east and west. At a distance from the microphones that increases each hour, the sound of a triangle, rung with a wooden mallet, indicates the direction of the path at that moment. The triangle sounds for one second in the first hour, two seconds in the second hour, three in the third, and so on, and at the start of the minute in the first hour, after seven seconds in the second hour, after fourteen in the third, and so on. These two-channel recordings were then paired for quadraphonic playback.

Helen Mirra’s many solo exhibitions include shows at The Renaissance Society at the University of Chicago, Berkeley Art Museum, KW Institute for Contemporary Art, and Haus Konstruktiv, and she participated in both the 50th Venice Biennial and the 30th Sao Paulo Biennial. Mirra has received awards from the Louis Comfort Tiffany Foundation, the Richard H. Driehaus Foundation, and Artadia. She was artist-in-residence at the Consortium for the Arts at the University of California, Berkeley and at the Isabella Stewart Gardner Museum, and has been a guest of the DAAD Künstlerprogramm (Berlin), Office for Contemporary Art Norway (Oslo), Stiftung Laurenz-Haus (Basel), and Iaspis (Stockholm).

Ernst Karel’s audio work includes electroacoustic improvisation and composition, location recording, and sound for non-fiction films. Together with Pawel Wojtasik and Toby Kim Lee, he made Single Stream, a large-scale video and four-channel audio installation commissioned by the Museum of the Moving Image in Queens, New York in 2013. Since 1999 Karel has performed and recorded together with Kyle Bruckmann in the electroacoustic duo EKG. Films for which Karel has edited and mixed sound include Sweetgrass, Foreign Parts, Leviathan, and Yumen. His most recent albums composed with location recordings are Materials Recovery Facility, Swiss Mountain Transport Systems, and Heard Laboratories.

Hans Op de Beeck's various works across mediums show the viewer non-existent but identifiable places, moments, and characters that appear to have been taken from everyday life. His black-and-white video Staging Silence (2) is based around abstract, archetypal settings that linger in the memory of the artist as the common denominator of the many similar public places he has experienced. These memory images are disproportionate mixtures of concrete information and fantasies, and here they materialize through anonymous tinkering hands. Arms and hands appear and disappear at random, manipulating everyday objects into miniaturized, artificially lit environments. The on-camera construction and deconstruction of these environments lends the video a narrative weight that emphasizes the uncanny quality of spaces committed to memory.

Support for these exhibitions has been generously provided by the Council for the Arts at MIT, the Office of the Associate Provost at MIT, the Massachusetts Cultural Council, TOKY, the MIT List Visual Arts Center Advisory Committee, and the Friends of the List. Additional support provided by Simone Subal Gallery for Sonia Almeida: Forward/Play/Pause; Peter Freeman, Inc. New York/Paris for Hourly Directional: Helen Mirra and Ernst Karel; and Marianne Boesky Gallery and Vlaamse Overheid Kunsten en Erfgoed/Flemish Government Arts and Heritage for Hans Op de Beeck: Staging Silence (2).