The exhibition inquires into the cultural significance of these mobile sound systems constructions and their use in the creative arts. The combination of sculpture, movement and sound takes the visitor into a world that addresses many different senses at once. 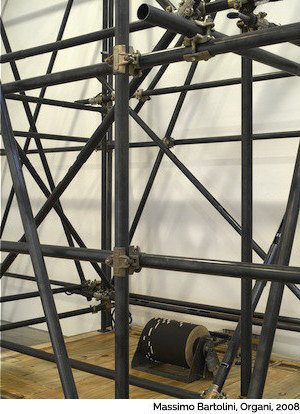 For the first time an exhibition is dedicated to the fascinating combination of art, sound and motion, and generates a pulsating world of gentle tones and impressive sounds.

From the barrel organ and the ghetto blaster to the large speaker vehicles at parades or demonstrations, right up to acoustic warfare – regardless of the context in which mobile sound systems are used, we are directly impacted by their equally fascinating and threatening effect.

The exhibition “Booster” inquires into the cultural significance of these constructions and their use in the creative arts. Since the start of the 20th century, artists have been producing breathtaking sound machines, again and again stretching the boundaries between different disciplines. The special combination of sculpture, movement and sound takes the visitor into a world that addresses many different senses at once: whether as fragile mechanisms or monumental objects, the mobile sound sculptures generate a pulsating world of (sub)cultural spheres in a choreography of gentle tones and high-volume sounds.

Against a background of spectacular installations and sculptures, the exhibition also traces the global roots of mobile sound systems.

The project was developed from a concept by and in collaboration with the artist Nik Nowak.