Photographs at Play. The exhibition presents an eclectic selection of eighty-five photographic works arranged in a continuous sequence that provocatively links images divergent in format, scale, process, and historical period. 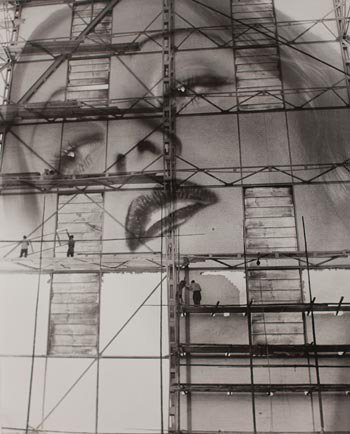 A Collective Invention: Photographs at Play (February 14–May 18) presents an eclectic selection of eighty-five photographic works arranged in a continuous sequence that provocatively links images divergent in format, scale, process, and historical period. The first exhibition organized by the Morgan’s new Department of Photography, established in 2012 with Joel Smith as Richard L. Menschel Curator and department head, the exhibition draws on the great range of photography’s functions, from folk art to Conceptual art and from astronomy to law enforcement. It also highlights the creative role played by collectors in bringing the many voices and purposes of the medium into critical focus. Objects in the exhibition are drawn from the holdings of the Morgan and twenty-five private collectors, including artists who collect.

Since its beginnings in the 1830s the medium of photography has been continually reinvented to take on forms and functions its pioneers never envisioned. Today, the internet and social media deliver photographs in ever greater profusion, detached from their material, geographic, and rhetorical context. Increasingly we encounter images in combinations based on personal preference rather than historical association. A Collective Invention: Photographs at Play resembles the World Wide Web in drawing freely from photography’s vastly different settings, but the exhibition restores to photographs a physical specificity that they lack online.

“The Morgan is extraordinarily excited about taking a more significant role in the study and exhibition of photography,” said William M. Griswold, Director of the museum. “Our inaugural exhibition explores connections between photographs that may at first look unrelated, a gesture that invites the viewer into a creative relationship with each work in the gallery. Joel Smith presents imaginative insights on the history of the medium while highlighting the efforts of collectors who are inventively engaged in finding new connections across the span of the art form.”

Visitors moving clockwise around the gallery will discover that each work in the exhibition shares one prominent trait with the work that comes before it and another with the one that comes after, producing an evolving chain of visual motifs and ideas. Thus a 1937 news photograph of Abraham Lincoln’s head on Mount Rushmore, half shrouded in workers’ scaffolding, is preceded by Edward S. Curtis’s study of a Paiute artist painting a boulder: two versions of rock art in the making. To the right of the half-concealed Lincoln hangs a 1963 publicity photograph of actor Montgomery Clift in the role of Sigmund Freud, dramatically clutching his face in one hand.

In another part of the show, an 1858 triple portrait by Charles Lutwidge Dodgson (Lewis Carroll) of his young muse Alice Liddell and her two sisters on a sofa appears between muralist José Maria Sert’s study of a nude model, posing on a sofa as the Queen of Sheba, and an oversize snapshot from the 1920s of three young women on a country outing who could almost be the Liddell sisters grown up.

The exhibition’s second-to-last photograph is a large untitled print by contemporary artist Noriko Furunishi, who used digital tools to weave together dozens of images of desert scenery into a spinning, spatially impossible spiral. It is followed by a stunning image of around 1900 by German astronomer Maximilian Wolf, portraying an explosive spray of stars in the Milky Way—bringing viewers, as an accompanying label puts it, to “the limits of the photographable.”

About the Morgan’s Photography Collection

Since its earliest years, the Morgan has had a small collection of photographs. Indeed, Pierpont Morgan and his son, J. P. Morgan, Jr., helped to fund the field research and production of Edward Curtis’s landmark The North American Indian. Since 1924, when the Morgan became a public institution, additional works have periodically entered the collection as gifts and, less often, by purchase.

The Morgan’s holdings currently number several thousand photographs, many of which portray figures whose work is represented in the museum’s core holdings of drawings, letters, manuscripts, books, and music. The founding of the Morgan’s department of Photography in 2012 signaled the institution’s commitment to the building of this collection and organization of related exhibitions and educational programs.

Joel Smith joined the Morgan in September 2012 as Richard L. Menschel Curator of Photography. He had previously served as curator of photography at the Princeton University Art Museum, where he oversaw more than a dozen exhibitions. He curated the popular Saul Steinberg: Illuminations, a traveling exhibition that opened in 2006 at the Morgan. He received his Ph.D. from Princeton in 2001. From 1999 to 2005, he was Fisher Curator at the Frances Loeb Art Center at Vassar College. Among his books are Edward Steichen: The Early Years, Steinberg at the New Yorker, and The Life and Death of Buildings: On Photography and Time.

When is a discovery an invention? When is accumulation art? Is recombination transformation? In an evening of short performances and talks, artists and scholars consider case studies in the relationship between collecting and creating. Participants include artists Carrie Cooperider, Tim Davis, and Nina Katchadourian, and media archaeologist Thomas Y. Levin, Princeton University. This program is co-organized by Cabinet magazine. A Collective Invention will be open at 5:30 pm for program attendees.

Exhibition curator Joel Smith will lead this informal tour of A Collective Invention.
Free with admission
Between the Lines
Saturday, March 1, 11 am

Written or drawn, lines are meant to be read and interpreted. In this interactive gallery conversation, a museum educator will lead participants in an hour-long discussion based on a selection of works from A Collective Invention.

Free with admission; Space is limited on a first-come, first-served basis.

A Collective Invention: Photographs at Play is organized by Joel Smith, the Richard L. Menschel Curator of Photography at the Morgan Library & Museum.

This exhibition is made possible by the Sherman Fairchild Fund for Exhibitions, with additional support from The Margaret T. Morris Foundation, Herbert Kasper, Winnie and Michael Feng, Richard Glasebrook, and an anonymous gift.

The Morgan Library & Museum
The Morgan Library & Museum began as the private library of financier Pierpont Morgan, one of the preeminent collectors and cultural benefactors in the United States. Today, more than a century after its founding in 1906, the Morgan serves as a museum, independent research library, musical venue, architectural landmark, and historic site. In October 2010, the Morgan completed the first-ever restoration of its original McKim building, Pierpont Morgan’s private library, and the core of the institution. In tandem with the 2006 expansion project by architect Renzo Piano, the Morgan now provides visitors unprecedented access to its world-renowned collections of drawings, literary and historical manuscripts, musical scores, medieval and Renaissance manuscripts, printed books, and ancient Near Eastern seals and tablets.