This Sweetness Outside of Time. Paintings, Objects, Books 1959-2014. Her oeuvre, which now spans more than 50 years, includes painting and visual narrative, autobiographical texts and films. Since the 1960s she has been seen as a pioneering spirit against censorship and for free love and autonomous female sexuality. Drapers solo show embraces not only collage, painting and video, but also large-format installations for which he combines these different genres. 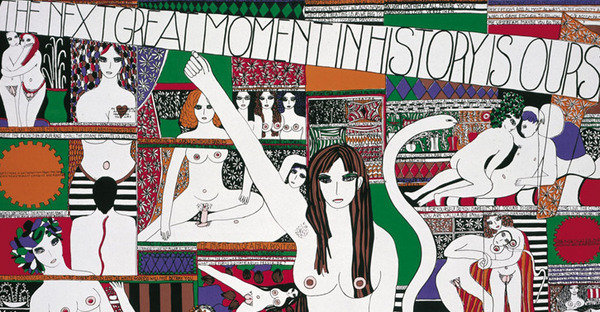 Markus Draper. From the Collection

In 2011 the Berlinische Galerie was given Markus Draper’s (*1969 in Görlitz) monumental installation Windsor Tower (2007) by a private collector. Together with recently acquired paintings the museum houses a representative body of work by the artist, which is going to be shown with an additional video-installation. Drapers oeuvre embraces not only collage, painting and video, but also large-format installations for which he combines these different genres. A central theme is the destruction and the slow or abrupt decay of architecture, as well as its auratization through people and events. The artist develops a subtle play between mundane material (cardboard scraps, wood slats) and highly atmospheric content. The central work in the presentation in the Berlinische Galerie is Windsor Tower, a more than five metre tall reconstruction of the ruins of a now demolished building in Madrid, which caused worldwide headlines in 2005 through a disastrous fire. Grouped around this piece are further works whose references can be found somewhere between German Romanticism and contemporary media-images.

This Sweetness Outside of Time. A Retrospective of Paintings, Objects, Books and Films from 1959 to 2014

The American Dorothy Iannone (b. 1933) occupies a distinct place as an artist in the second half of the twentieth century. Her œuvre, which now spans more than fifty years, includes painting and visual narrative, autobiographical texts and films. Since the 1960s she has been seen as a pioneering spirit against censorship and for free love and autonomous female sexuality. She continues to go her own way without compromise, artistically and conceptually.

Dorothy Iannone’s great theme is ecstatic love. The paintings, visual narratives, texts and books by this pioneer of women’s sexual and intellectual emancipation draw uncompromisingly on her own life. Iannone’s art frequently fell foul of the censors because of allegedly pornographic content. And yet her depictions of the sexual union between man and woman have an unmistakably mystical dimension rooted in the spiritual and physical union of opposites. This anchors her visual universe within cultural history and lends a modern, personal interpretation to Eastern religions, including Tibetan Buddhism, Indian Tantrism and Christian ecstatic traditions like those of the seventeenth-century Baroque.

The aim of this retrospective is to illustrate the intermediality and radical subjectivity of this unique artistic opus, where image, text, film and sound constantly enter new relationships. A central concern of the exhibition will be to explore this innovative energy in the art of Dorothy Iannone.

A catalogue titled Dorothy Iannone. This Sweetness Outside of Time. Retrospective 1959–2014 will be published by Berlinische Galerie at Kerber Verlag, Bielefeld. With an introduction by Dr. Thomas Köhler (Director of the Berlinische Galerie), an interview from Maurizio Cattelan with the artist along with essays by Dr. Annelie Lütgens and Jan-Frederik Bandel including images of the work and rare biographical material this publication will document Dorothy Iannone's oeuvre from the sixties to the present day.

With the kind support of Hauptstadtkulturfonds Berlin, the capital cultural fund