River of Fundament. The entire ensemble of his multipart project - the symphonic film of epic length (5 hours), large-scale sculptures, drawings, photographs, story boards and vitrines - represents the culmination of seven years of intense meditation on death, rebirth, transformation and transcendence. The central question is if there is a coherent identity, a spiritual property retaining a person's particular characteristics not just throughout life, but surviving physical death. 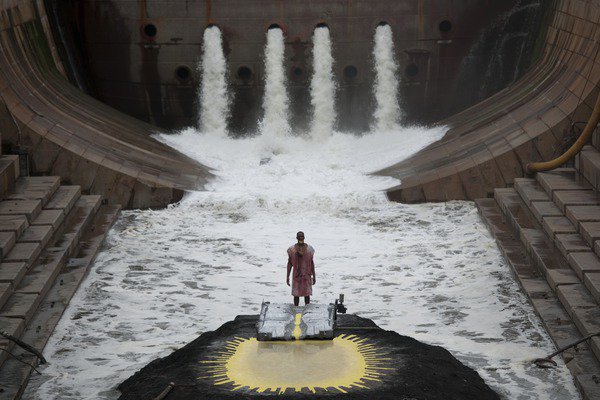 Haus der Kunst is pleased to present the world premier of "Matthew Barney: River of Fundament," an exhibition that brings together for the first time, the entire ensemble of Matthew Barney's multi- part River of Fundament project, comprising the symphonic film of epic length (5 hours) "RIVER OF FUNDAMENT," large-scale sculptures, drawings, photographs, story boards, and vitrines. In its entirety, the project is one of the artist's most complex and ambitious works to date.

Matthew Barney has been developing the project in collaboration with the Berlin-based American composer Jonathan Bepler since 2007. The work is inspired by the American author Norman Mailer and his novel, "Ancient Evenings," set in Ancient Egypt from 1290- 110 B.C., which when it was published in 1983 was criticized for its excessive nature. The film, "RIVER OF FUNDAMENT" will celebrate its European premiere on March 16, 2014 at the Bavarian State Opera house in Munich. The film presentation and the exhibition at Haus der Kunst constitute the multi-part "River of Fundament" project, a new Barney Gesamtkunstwerk since his celebrated "CREMASTER" retrospective more than a decade ago.

"RIVER OF FUNDAMENT" represents the culmination of seven years of intense meditation on death, rebirth, transformation and transcendence. Mailer's novel depicts the spiritual path of the Egyptian Menenhetet I through three deaths and rebirths; Barney replaces reincarnation with recycling and the man's soul with the automobile. "REN," the project's first act, documents a live performance in a car dealership in Los Angeles in 2008, where a car – the 1967 Chrysler Crown Imperial from "CREMASTER 3" – undergoes its first death. "Burning shrapnel and rock salt spray through the space, ricocheting off windows. Sheet metal tears away from the chassis," is how the description in the libretto reads. The second act, "KHU", is set in Detroit and brings the Chrysler back to its birthplace, reincarnated as a 1979 Pontiac Firebird Trans Am. In "BA", the automobile's soul travels to New York, where the myth materializes as a sculpture.

Specialists from various industrial processes – including large- scale iron smelting, automobile demolition, and sulphur casting – join actors and characters from "CREMASTER 3" (another collaborative project between Barney and Bepler): the Entered Apprentice played by Barney himself, and the Entered Novitiate played by Aimee Mullins appear in the collective role of the "Ka of Norman". With excerpts from primary texts, such as the prologue of Mailer's novel, and the Egyptian Book of the Dead, the libretto offers a confluence of meditations on the timeless concerns of mortality and regeneration.

At the center of the exhibition in Haus der Kunst is DJED, a massive iron sculpture that was cast during a live performance, "KHU." The primary form and iconography of DJED is the undercarriage of the Chrysler Imperial. For this work - witnessed by a live audience - 25 tons of molten iron were poured from five custom-built furnaces into an open, molded pit formed in the earth at the site of a derelict steel mill along the Detroit River. The work shares a formal similarity with the djed pillar, the Egyptian hieroglyph representing eternity and stability. Originally, the djed pillar was represented by a bundle of reeds or branches, a symbol of fertility. The erection ceremony of the djed pillar, in which the pharaoh raised the pillar using rope, was later absorbed into the cult of Osiris, the god of death and fertility, and so strongly associated with the god that the pillar was interpreted as Osiris' spine. Spell 155 of the Book of Death refers to this: "Spell for a djed-pillar of gold placed on the neck of the transfigured spirit: O weary-hearted One; you have your vertebrae. Raise yourself Osiris, to place yourself on your side, so that I may place water under you. I have brought you a djed-pillar of gold so that you may rejoice by it."

The exhibition continues the program Barney has developed over the last seven years in which narrative sculpture is generated through a complex system of storytelling that intertwines personal, historical, and modern mythologies. The central question is if there is a coherent identity, a spiritual property retaining a person's particular characteristics not just throughout life, but surviving physical death. With the sculptures of this project, Barney has moved away from his signature materials - thermal plastic and petroleum jelly - towards metals, materials, which, on the one hand, are more typical of traditional sculpture and, on the other hand, of industrial processes: iron, bronze, lead, copper, brass, zinc, silver, as well as the continued employment of organic elements such as sulphur and salt. The presentation of 15 new sculptures includes "Canopic Chest" which refers to the canopic jars, in which the viscera were laid to rest, as well as "Sacrificial Anode", which refers to a sacrificial metal used to protect other metals from corrosion. The forms are based on the "was", an ancient Egyptian royal staff, a symbol of power, which in antiquity was made of a dried bull's penis and later was cast in precious metals.

The exhibition also includes a suite of new drawings, photographs, storyboards, and vitrines, intricately mapping the character and thematic development of the project. The drawings show Barney's treatment of Mailer's novel "Ancient Evenings." Each of these exhibits - like e.g. the open copy of the book in which Barney made drawings – is presented on a block of salt in a vitrine designed by the artist. These salt blocks are references to Detroit. The salt mines that extend beneath the Detroit River contain a vast and complex transport system that was once compared to the network of tunnels and secret chambers beneath the Great Pyramids. In his drawings, Barney has continued to explore unorthodox, highly symbolic substances and materials such as gold, silver, lapis lazuli, and sulphur. The meaning of the drawings is being conveyed as much by the multi-layered narratives and the stylistically refined use of the medium.

A new large-format photograph depicts a dead Ibis, lying on the ground surrounded by sage brush and foliage from the American high desert. The Ibis has been shot with a shotgun and has multiple entrance wounds. In its mouth is a small gold sphere, used in a scene in "River of Fundament" where the Ka of Norman (Matthew Barney) wears the costume of James Lee Byars, and reenacts The Death of James Lee Byars.

Matthew Barney was born in 1967 in San Francisco and lives and works in New York. He has been included in group exhibitions, such as documenta IX in Kassel, the 1993 and 1995 Whitney Biennals, and the 1993 and 2003 Venice Biennale. The solo exhibition "The Cremaster Cycle", organized by the Solomon R. Guggenheim Museum in New York, travelled to the Museum Ludwig in Cologne and the Musée d'Art Moderne de la Ville de Paris in Paris (2002-03). Barney was also the subject of the solo exhibitions "Drawing Restraint," organized by the 21st Century Museum for Contemporary Art, Kanazawa, Japan, which traveled to Leeum Samsung Museum of Art, Seoul; San Francisco Museum of Modern Art; Serpentine Gallery, London; and Kunsthalle Vienna, and "Matthew Barney: Prayer Sheet with the Wound and the Nail," which was on view at Schaulager/Laurenz Foundation in Basel, Switzerland in 2010. In 2013, a selection of the artist's drawings was presented at New York's Morgan Library and Museum and at the Bibliothèque national de France ("Subliming Vessel: The Drawings of Matthew Barney").

The catalogue is published by Rizzoli and includes contributions by Hilton Als, Homi K. Bhabha, Diedrich Diederichsen, Okwui Enwezor, and David Walsh, as well as installation views from the exhibition in Haus der Kunst, ISBN 978-0-8478-4258-2.

The European premiere of the film is presented in cooperation with Bavarian State Opera, Munich. "RIVER OF FUNDAMENT" is produced by Matthew Barney and Laurenz Foundation