Art and Other Ordinary Acts in South Africa. The exhibition Features 25 Artists and Collectives, including David Goldblatt, Zanele Muholi, Santu Mofokeng, Athi-Patra Ruga, and William Kentridge. While the show explores new approaches to daily life, it also makes visible the continued commitment of artists to activism and contemporary politics. 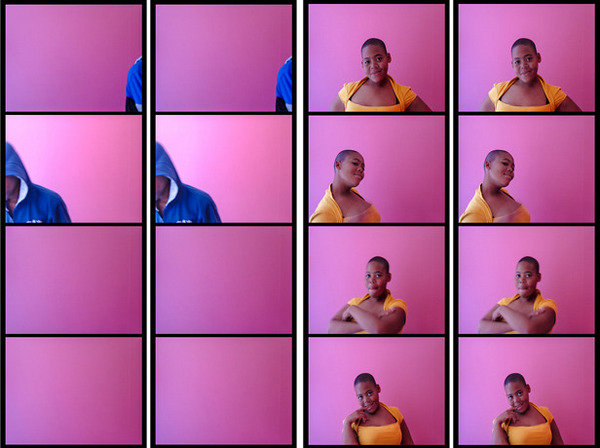 Jointly organized by the San Francisco Museum of Modern Art (SFMOMA) and Yerba Buena Center for the Arts (YBCA), Public Intimacy: Art and Other Ordinary Acts in South Africa brings together 25 artists and collectives who disrupt expected images of a country known through its apartheid history. The exhibition features an arc of artists who look to the intimate encounters of daily life to express the poetics and politics of the “ordinary act,” with work primarily from the last five years as well as photographic works that figure as historical precedents. On view at YBCA February 21 through June 29, 2014, Public Intimacy presents more than 200 works in a wide range of mediums, many of them making U.S. or West Coast debuts.

The exhibition joins SFMOMA’s important and growing collection of South African photography with YBCA’s multidisciplinary purview and continued exploration of the Global South. Significant documentary photography is paired with new photographs and work in other mediums, including video, painting, sculpture, performance, and publications, to reveal the multifaceted nuances of everyday life in a country still undergoing significant change. Coinciding with the 20th anniversary of democracy in South Africa, Public Intimacy looks at the way artists imagine present and future possibilities in South Africa. A new orientation emerges through close-up views of street interactions, portraiture, fashion and costume, unfamiliar public actions, and human imprints on the landscape.

The exhibition’s three curators—Betti-Sue Hertz, director of visual arts at YBCA; Frank Smigiel, associate curator of public programs at SFMOMA; and Dominic Willsdon, Leanne and George Roberts Curator of Education and Public Programs at SFMOMA—developed the show after visits to South Africa, where they met with artists, curators, and critics. The exhibition—and a companion publication to be published in fall 2014—grew out of this research.

“Although South Africa’s political history remains vital to these artists and is important for understanding their work, Public Intimacy offers a more subtle view of the country through personal moments,” said Hertz. “It goes against expectations in order to reveal the smaller gestures and illuminate how social context has affected artists and how they work.”

“The familiar image of contemporary South Africa as a place of turmoil is, of course, not the whole story,” added Willsdon. “The art in this exhibition restages how those violent incidents fit in the broader realm of human interactions—a way of showing public life there in a more complex light.”

“Another central aspect of the exhibition is live performance,” said Smigiel. “Three major live works will unfold both in and outside the gallery context, offering a way to situate and reframe San Francisco through the lens of what artists are producing in South Africa.”

Public Intimacy is part of SFMOMA’s collaborative museum exhibitions and extensive off-site programming taking place while its building is temporarily closed for expansion construction through early 2016. As neighbors across Third Street in San Francisco, YBCA and SFMOMA have partnered in the past on various performance and exhibition projects, but Public Intimacy represents the deepest collaboration of shared interests to date between the two institutions. It also brings together SFMOMA’s approach to curating live art and YBCA’s multidisciplinary interest in exhibitions, social practice, and performances.

Exhibition Highlights
While the exhibition explores new approaches to daily life in post-apartheid South Africa, it also makes visible the continued commitment of artists to activism and contemporary politics. Beginning with photographs from the late 1950s and after, the exhibition includes vital moments in the country’s documentary photography—from Ian Berry’s inside look at an underground drag ball to Billy Monk’s raucous nightclub photos—each capturing a moment of celebration within different social strata of South African society. Ernest Cole’s photographs of miners’ hostels and bars and Santu Mofokeng’s stirring photographs of mobile churches on commuter trains reveal everyday moments both tender and harsh.

David Goldblatt’s photographs depict the human landscape in apartheid and after, providing the genesis of the idea of “public intimacy.” Over decades of photographs in urban, suburban, and rural locations, Goldblatt has chronicled the changing nature of interpersonal engagement in South Africa. At the same time, they provide a historical backdrop and visual precedent for other artists in the exhibition, including Zanele Muholi and Sabelo Mlangeni.

Muholi has won several awards for her powerful photographic portraits as well as her activism on behalf of black lesbians in South Africa. Although best known for her photographs—in particular her Faces and Phases series—Muholi continuously experiments with an expanded practice including documentary film, beadwork, text, and her social-action organization Inkanyiso, which gives visibility to conditions facing lesbians of color in her country. “Sexual politics has been looked at less than racial politics in South Africa, but in many ways, the two have always been intertwined,” said Willsdon.

Mikhael Subotzky and Patrick Waterhouse bring another perspective to the upheavals of life in the city of Johannesburg with works from their Ponte City (2008–10) series, comprised of photographs, video, and a publication offering various views of this centrally located and iconic 54-story building. The works illustrate the struggles facing many native and immigrant South Africans in the years following the dissolution of apartheid, including stalled economic growth and social opportunities.

In contrast to the daily realities pictured in photographic works in the exhibition, Athi-Patra Ruga’s ongoing performance series The Future White Women of Azania (2010–present) features fantastical characters—usually played by the artist—whose upper bodies sprout colorful balloons while their lower bodies pose or process in stockings and high heels. Ruga’s Azania is a changing utopia, and Smigiel notes the shift: “The balloons are filled with liquid, and as the figure moves through the streets, they start popping, so the character dissolves and reveals a performer, and the liquid spills out and into a rather sloppy line drawing,” A new iteration of the series, The Elder of Azania, will premiere in the YBCA Forum during the exhibition’s opening weekend.

Chimurenga, an editorial collective working at the intersection of pan-African culture, art, and politics produces publications, events, and installations. Founded in 2002 by Ntone Edjabe, the collective has created the Chimurenga Library, an online archiving project that profiles independent pan-African paper periodicals from around the world. Expanding upon this concept, their presence in Public Intimacy will have two elements: a text and media resource space in YBCA’s galleries and an intervention at the San Francisco Public Library main branch that will explore the history of pan-African culture in the Bay Area, scheduled to open in late May.

Providing one of the most personally vulnerable moments in the exhibition, Penny Siopis’s series of 90 small paintings on enamel, Shame (2002), provokes a visceral reaction. With red paint reminiscent of blood and bruises, Siopis mixes color and text in an attempt to convey emotion rather than narrative. While she is interested in the guilt and embarrassment most frequently associated with shame, she also looks at the possibility for empathy that emerges from traumatic experiences.

In all of these works, explains Hertz, “We are looking at how art and activism align, but we’re also interested in how politics is embedded in less obviously political practices, such as Sabelo Mlangeni’s photographs of mining workers’ hostels, Penny Siopis’s powerful painting series about human vulnerability, or Nicholas Hlobo’s large-scale, organically shaped sculptures made primarily of rubber.”