An exhibition organized by artist and writer John Miller that features a multigenerational group of artists with whom he has collaborated in the past or maintains regular dialogue. The paintings, photographs and moving images included in the show elicit a disquieting effect that Miller attributes to a troubled process of representation. 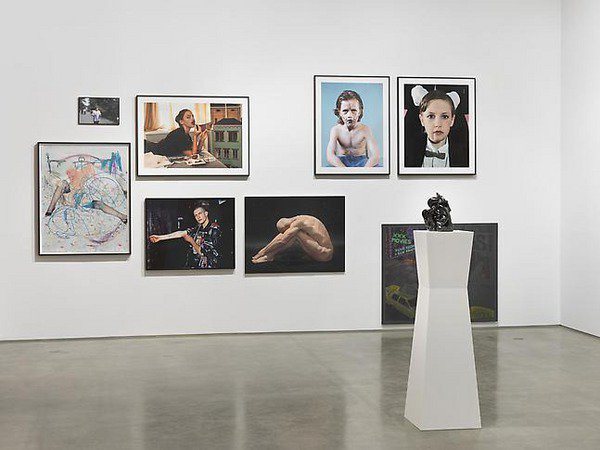 Metro Pictures presents “Bad Conscience,” an exhibition organized by artist and writer John Miller that features a multigenerational group of artists with whom Miller has collaborated in the past or maintains regular dialogue. The paintings, photographs and moving images included in the exhibition elicit a disquieting effect that Miller attributes to a troubled process of representation. Works in “Bad Conscience” range from highly nuanced images of the banal, like in Marilyn Minter’s paintings of paper curls and spilled coffee on a linoleum floor, to more explicit works about vice and depravity, such as Jane Dickson’s painting of a strip club in 1981 Times Square.

Where Dickson’s work relates to sexuality from a sociological perspective, Leigh Ledare’s photographs derive from personal psychology. In Clementine Ledare asked children to draw over a lascivious image of his naked mother lying on a bed and in another he invited women from an online ad, which is exhibited along with the image, to photograph him, turning himself into a sexualized object. Aura Rosenberg’s Little Hans refers to a case study of Sigmund Freud’s and connects to Dickson’s and Ledare’s works as it ascribes guilt to sexuality. “Little Hans” was a five-year-old boy phobic of horses and obsessed with masturbation. In this work Rosenberg uses a drawing of a giraffe the boy’s father made. Freud explains in his essay that once the father finished the drawing the boy insisted he add the animal’s penis, which is suggested by a crude line beneath its midsection.

The realist paintings of Caleb Considine, Greg Parma Smith and Matt Watson, former students of Miller, all share a sense of degradation and evident self-consciousness in technique. Considine exhibits No-Shank, a painting of a hand holding a flexible pen, an object given to prisoners so they cannot stab guards and other inmates. Parma Smith’s meticulous paintings of a Swiss Army Knife and colored pencils manipulate the generic and iconic significance of the image for a decidedly outré effect while Matthew Watson’s hyperrealist portraits of his former professors Nic Guagnini and Kara Walker, which were made under the condition they trade one of their own works, raises questions about obligation and responsibility between the commissioner and commissioned.

Cara Benedetto’s animated PowerPoint presentation Teaser introduces a man and a woman and tracks their courtship from a classified ad to a romantic weekend. Using generic snapshots and a theatrical soundtrack, Teaser is a kind of movie trailer that obliquely chronicles the couple’s brief relationship. The melodramatic music, enigmatic narrative and unusual diction of the captions make Benedetto’s animation strikingly unnerving. Takuji Kogo & Young-Hae Chang Heavy Industries exhibit two Flash animations comprising only of captions in English and Japanese and melancholic MIDI soundtracks. Statement 0029: To My Good and Loyal Subjects is the Japanese Emperor Hirohito’s address of surrender following the atomic bombings on Hiroshima and Nagasaki and in Statement 0063: After Recent Surgery On My Scalp we hear Michael Jackson’s statement following accusations that he was a repeat child molester.

John Miller’s forthcoming book “Educational Complex” examines Mike Kelley’s eponymous work and will be published as part of Afterall’s One Work series in 2015. Two anthologies of Miller’s essays have been published by JRP|Ringier: The Ruin of Exchange and The Price Club.