On show the works by over 30 artists spanning the last 105 years on the idea of "abstraction" in drawing, selected by Richard Deacon, one of the most important British sculptors of his generation who won the Turner prize in 1987. 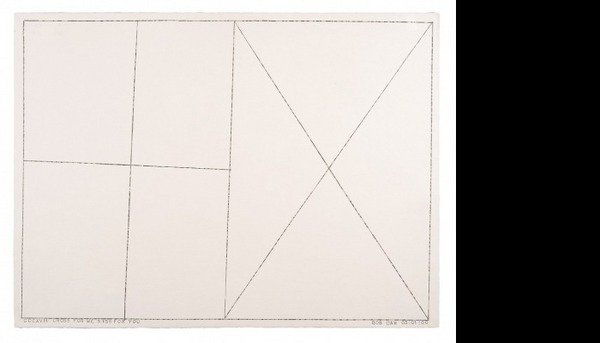 “One of the things that has interested me in making this selection – aside from the intrinsic delight at looking at so many drawings – has to do with ideas about what or where is the real.” Richard Deacon

Artist Richard Deacon has selected a broad range of works by over 30 artists spanning the last 105 years on the idea of ‘abstraction’ in drawing.
Deacon says: ‘This exhibition has no ambitions to be a universal survey, but in selecting a show around the idea of abstract drawing, these various strands – inscriptive, calligraphic, ornamental, generative, individuating and identifying – have all featured.’

Richard Deacon CBE is one of the most important British sculptors of his generation and has exhibited internationally since the early 1980s. He won the Turner prize in 1987, and a major retrospective exhibition of his work will be presented at Tate Britain in 2014 (5 February – 27 April). The activity of drawing is crucial to his work as a sculptor, which engages with processes and means of manufacture. This deep interest in making as an activity is evident in his selection of works for Abstract Drawing.
The earliest works exhibited here are drawings made in 1906 by Swedish artist Hilma af Klint, recently heralded as producing the earliest forms of Western abstraction, and in 1917/18 by Kazimir Malevich, regarded as the father of abstraction. There is a rare blot drawing by Jackson Pollock (1951) that exploits the quality of working with fluid mediums on porous paper. Works made in the 1960s include those by Eva Hesse, Mira Schendel, Dom Sylvester Houedard (well known for his concrete poetry), and Frederick Hammersley (an American artist who pioneered computer drawings).

Two works on paper by Sol LeWitt, a One-second drawing by John Latham, works by Indian modernist Nasreen Mohamedi, and Romanian artist Victor Caito were all made in the 1970s. Works made in the 1980s include rarely seen drawings in relief by Anish Kapoor and works by artist and historian John Golding whose Paths to the Absolute (2000) is a key text on abstract art.
Watercolours on paper by David Austen represent the 1990s and works from the 2000’s include senior Iranian artist Monir Shahroudy Farmanfarmaian, Turner prize winner Tomma Abts and nominee Alison Wilding (the latter the subject of a major Duveen galleries display at the newly renovated Tate Britain, London), London-based artists David Batchelor, Emma McNally and Sam Messenger and International artist Susan Hefuna, who has German-Egyptian heritage. Another highlight is a newly commissioned wall drawing by US-based artist Victoria Haven.
Abstract Drawing is Drawing Room’s fourth artist-curated exhibition, a strand of the programme that aims to provide insight into the ideas that inform the work of key contemporary artists.