In her works, Antje Majewski pursues anthropological and philosophical questions using the resources of painting and video. "Was wir zeigen wollen" provides an unconventional overview of practices, visual languages and gestures of showing and narrating in the medium of painting as well as text and film. 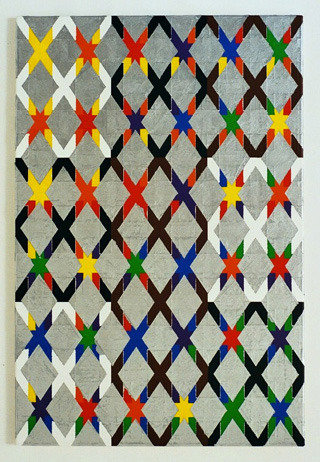 The artist Antje Majewski (born 1968 in Marl/Westphalia) has been dealing for some time with the origin and significance of objects which she has brought back from various journeys. Seven of them have been gathered in an imaginary museum and form the core of her so-called “Gimel World” – a world of relations, in which no thing exists independently of the next, no person independently of the world. Departing from this collection Antje Majewski now presents, for the first time in Germany, her full research into “the meteorite”.

The exhibition in the Studio is a travel report: an elementary component of Antje Majewski's research is to undertake a second journey to the places of origin of the objects brought back and to follow their stories, in order to “make them speak again”. In Heidelberg she is going to present the whole process of objectively exploring the “meteorite” – from the purchase of the object in 2005 at a flea market in Beijing, through the encounter with the meteorite researcher Lu Ling to the trip to the village of Yang Wu Sha in Southern China, which itself possesses a particularly large meteorite. The encounter with Antje Majewski was significant for the village residents: they used the artist's interest as an argument vis a vis the government, against resettlement but in favour of opening the region for tourism.

While it is on, the exhibition will be expanded by more photos and information. Antje Majewski is going to travel back to Yang Wu Sha and report on what has become of the village.

In her works, Antje Majewski pursues anthropological and philosophical questions using the resources of painting and video. She studied Art History, Modern History and Philosophy in Cologne, Florence and Berlin. She has been Professor of Painting at the Muthesius Academy of Fine Arts and Design in Kiel since 2011.

The exhibition with the programmatic title “Was wir zeigen wollen” provides an unconventional and cross-generational overview of practices, visual languages and gestures of showing and narrating in the medium of painting as well as in adjacent formats such as text and film. The invited artists represent a continuous confrontation with the possibilities offered by their chosen creative means. Personal stories and the circumstances of their works' time of creation are always reflected in their works as well.

With a wide selection of images Bertold Mathes (born 1957, Freiburg) provides an insight into the practice he has developed over many years. In his case, painting is a continuous test arrangement and is, on the basis of a kind of idiomatic grammar, constantly unfolded further and simultaneously questioned. His working in series is interrupted by single works, in which the artist seeks to go against the form of what he has elaborated. The artist's parallel output – drawn “index” sheets or “transfer” works on paper – testify to his intensive dealing with the possibilities of painting and of its history.

Work on idiomatic language also stands at the focus of the oeuvre of the author and painter Etel Adnan (born 1925, Beirut), who was a witness to the Lebanese civil war for a number of years. The artist finds her way to painting via the delimitation with literature. In contrast to writing – which she understands as something social, because we share the words with one another – painting, for her, signifies something spontaneous, free from social constraints.

Adnan's biography shows a similarity with that of Sarah Schumann (born 1933, Berlin): initially shaped by war (WW2), from which Schumann finds catharsis through art. She dealt with the image of woman right from her early shock collages and collaged female icons in images of destruction. After many travels she returned to Berlin in 1968, developed her own painting technique and joined the women's group “Brot und Rosen” (Bread and Roses). During this time she was also co-initiator of the NGBK exhibition of female artists, “Künstlerinnen International 1877-1977”, which was the first, in 1977, to provide a historically comprehensive overview of art by women.

The question of the implications of this commitment is addressed by Michaela Melián (born 1956, Munich) in her multimedia installation “Silvia Bovenschen und Sarah Schumann” (2012): alongside the artist's paintings she gives Sarah Schumann and her partner, the feminist author Silvia Bovenschen, a chance to speak. At the Heidelberger Kunstverein, Melián's installation is now for the first time being placed in relation to originals by Schumann.

In the 1978 television documentary “Ein Bild von Sarah Schumann”, Harun Farocki (born 1944, Nový Jicín) follows the creation of a typical figurative painting by the artist: he allows us to watch as, using the collage technique, she revises and integrates photography and painting. The amount of time Schumann puts into her artistic production is addressed in addition.

With “Malerei heute” (with Anja-Christin Remmert) the filmmaker and painter Stefan Hayn (born 1965, Rothenburg ob der Tauber) also creates a type of long-term documentary. Accompanied by texts, real scenes and experimental music, on the basis of plein-air watercolours he performs a personal narrative of the politically driven economic changes of the years 1998–2005. Painting becomes the starting material for a film that addresses processes of image-making and observing, the “painterly vision” itself. Hayn's latest film S T R A U B (2006–2014) focuses on the artist's personal confrontation with the oeuvre of the Marxist-leaning filmmakers Jean-Marie Straub and Danièle Huillet.

With “What we are trying to show” we wish, not least, to pose the question of how, in the selected complexes of works, expressive possibilities of text, film or curatorial work are refracted into painting or, conversely, how painterly discourses are resumed and reflected in other media.

* Barbara Buchmaier (born 1975, Augsburg) is an art historian and works in Berlin as a freelance art historian, teacher and gallery employee. She writes, among others, for “ Texte zur Kunst” , “ Artforum.com” and the Berlin art magazine “ von hundert”