The exhibition shows the narrative fiber work and drawings of Darrel Morris, along With clown paintings by Holly Farrell. This is Morris' first solo show in Chicago. 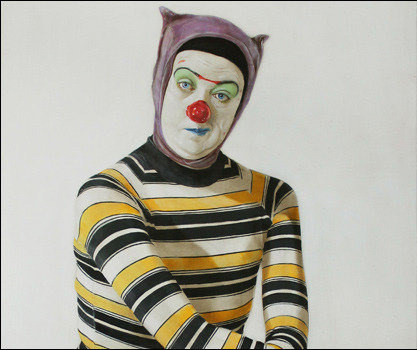 As we continue to strive for great pairings of art and artists, we present the narrative fiber work and drawings of Darrel Morris, along With clown paintings by Holly Farrell. This is Morris' first solo show in Chicago since he moved back to his family home in Kentucky. It's a reverse homecoming as Morris was an influential teacher at the School of the Art Institute for 15 years. He taught and mentored many artists who are now spread out all across the United States.

We have been thinking about Holly Farrell for a long time.... and finally made a show happen with a series of clown portraits: 10 clowns modeled for her in costume and makeup in her hometown of Toronto. I'll just say that I have always wanted to do a clown show. Farrell's beautifully handled realism will provoke the appropriate range of responses that every clown show should have!

Darrel Morris / ...waiting for nothin' / embroidery and works on paper
Darrel Morris' work has its origins in storytelling. Growing up in Appalachia he saw lots of arts and crafts, lawn art, and explicit religious art. As a young child he wanted to be a cartoonist and wanted to create his own world. Now he feels like a satiric reporter of sorts, reporting events from his personal and public life. He reports on things witnessed or experienced, using techniques and materials that come from and integrate into his daily life. The majority of his work reflects how people present themselves to the world and how they interact with others; sort of dull and odd slices of life. His work deals with social issues: gender stereotyping, misuse of authority, economic class, child abuse, and aging. Morris received a MFA from SAIC in 1987. He has exhibited throughout the United States and Canada, including solo shows in Chicago and New York. His work is published as part of the Telos Art Publishing "Portfolio Collection" series (vol. 33, 2004). He received the Louis Comfort Tiffany Foundation Fellowship, the Art Artadia Award, several Illinois Arts Council Artists Fellowship awards, and the Richard H. Driehaus Foundation Individual Artist Award.

Darrel Morris gives a lecture on his work as part of the Material and the Politics of Making Lecture Series made possible by The William Bronson and Grayce Slovet Mitchell Lectureship in Fiber and Material Studies at the School of the Art Institute of Chicago. Monday, February 24, 2014, 12:00 pm, Gene Siskel Film Center, 164 North State Street.

Holly Farrell / Clowns / paintings
Farrell's focus for the past twenty years has been primarily still life, but one of her long-term goals was to find her way to portraiture. She always felt her still life paintings were in themselves portraits - mostly paintings of solitary subjects set against a spare background. As a self-taught painter she had many periods struggling to figure out technique, or color, or how to trust her instincts; that you can't always apply what you are seeing, and that sometimes you have to rely on what you're feeling.

In much the same way she wanted to paint people. In the past few years she has been giving equal time to portraiture, exploring the nuances that come with painting a subject that is living, breathing and expecting a certain outcome. Farrell loves early portraiture, the kind that many people qualify as Naive or Folk, the kind of painting that in its simplicity, reflected back something of both the painter and the sitter. This is the kind of painting Farrell likes to do. She is not sure why she decided to make her first show of portraits about clowns. The clown is many different things to many different people. As much as these paintings are about her, and the clowns, she thinks they are really about whoever happens to pass by.