lag/lack/leack/lapse. Elisions and allusions pervade the works of the Swiss artist, which frequently illuminate the characters of his chosen media, predominantly photography and video, but extending to readymades and installations. 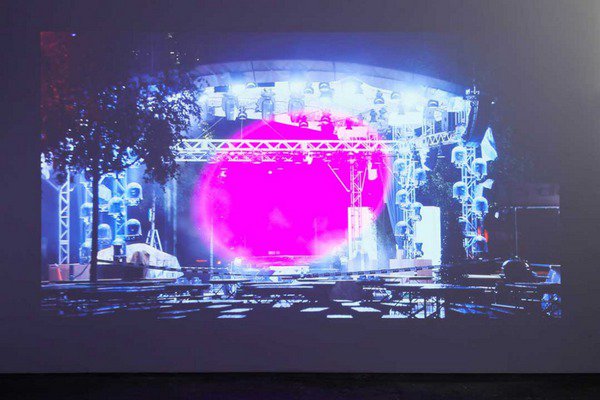 RaebervonStenglin is delighted to present 'lag/lack/leak/lapse', Thomas Julier's first exhibition with the gallery. Elisions and allusions pervade the works of the Swiss artist, which frequently illuminate the characters of his chosen media — predominantly photography and video, but extending to readymades and installations — as much as they do their apparent subject matter. Reality comes refracted in Julier's art, generating heightened experiences of syncopated rhythm.

Light processing is a central theme in 'lag/lack/leak/lapse'. Static and moving images are arrived at through different technologies, from digital and analogue photographic technique to mobile phone recording, then modified and realised through numerous sources of light: on flatscreens, back-lit glass and video projections and photographs variously spotlit and bathed in coloured light. Julier is interested in “the configuration of different shifts that result from a non-representational use of video and photography”, the lags and lapses that this brings about. Sounds leak unseen into scenarios, inviting imaginative speculation as to their causes, and the information lost in moving from one medium into another creates a charm of its own. At RaebervonStenglin, Julier's new works — Dawn in the Basement (Light Check), Crowd, Detroit in Berlin / Colour-Wheel and Optical Apparatus (all 2013) — experimentally incorporate previously-made works as source material; the changes wrought by the translations themselves become the matter of the works.

The immersive environments of Julier's works create a trance-like poetics of pattern, rhythm and light that is at once highly artificial and simultaneously true to an existence increasingly moderated — and enjoyed — through technology. Club scenes, the platforms of digital media and architecture all feed into his art, yet the machinery of contemporary life is left strangely devoid of humanity, even when people ostensibly figure; a lack that is left deliberately for the visitor themselves to fill in.

Thomas Julier was born in 1983. He studied photography at University of Arts Zürich and gained his Fine Arts MA in 2013. His solo exhibitions include 'Glitch in the Sunlight', Coalmine, Winterthur (2013); 'Together in Space' with Cedric Eisenring, Karma International, Zürich (2011); 'TA-KU-NA-HA', Bielefelder Kunstverein, Bielefeld (2011); and 'Hakuna Matata', Karma International, Zürich (2010). Julier was the recipient of the GEORGE foundation award in 2010 and 2013, and the Kanton Wallis New York residency in 2012.