A project that interrogates notions of modernity through its "negative horizon" animism. It conceives animism as a category in which modernity and state-reason imagined the absence or transgression of its own conceptual boundaries. 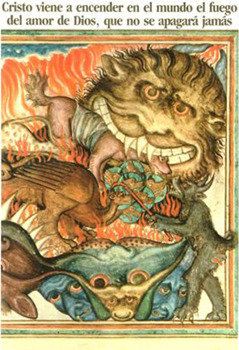 Curated by Anselm Franke
Home Workspace Program (HWP) is pleased to present Animism at Ashkal Alwan in Beirut. The exhibition is presented as part of Chapter 3 of the HWP 2013–14, led this year by Jalal Toufic and Anton Vidokle and open to all who wish to take part.

Animism has been a multi-part exhibition project realized in various collaborations since 2010. The project interrogates notions of modernity through its 'negative horizon,' animism. Originally an anthropological concept denoting humanity's alleged original beliefs in an animated nature and migrating souls, this project conceives of animism not primarily as belief, but as a category in which modernity and state-reason imagined the absence or transgression of its own conceptual boundaries, chiefly between inanimate matter and non-humans, geared to delineate the status of "person" endowed with a voice and rights. The project does not ask how some people come to perceive objects or nature as "social beings," but inverts the question to delineate how objects are made and the status of person can be withheld or withdrawn. Animism then becomes a lens through which the making of boundaries comes into view, which situates aesthetic processes, such as the effect of animation, against a historical backdrop of modern-colonial mythologies and mobilisations of science. The project seeks to register current shifts from from a critique of alienation, reification and objectification, to a cultural production under the paradigm of subjectivation and the technological mobilization of pre-individual mimesis and relationality. The works and archival documents on display interrogate the symptomatic media-effects of modern boundaries, the nexus between active and passive, poiesis and pathos, and hence recast the ecological network-paradigm of the present in terms of boundary-practices and a critique of media-technologies.

The opening night will include the public presentation "Modernizing Animism? Specters of Superstition, Partisanship, and Rationalist Control" by Anselm Franke.

Chapter 3 will include a keynote lecture and a five-session seminar by Jalal Toufic, and a series of talks, workshops and screenings around Animism organized by Anton Vidokle.

8pm
Public: "Creating Universes that Include Dancers," keynote lecture by Jalal Toufic
For each of the five chapters in HWP 2013–14, Toufic will give a keynote lecture as well as a seminar in several sessions that explore a variation on "creating universes that don't fall apart 'two days' later" that relates to the inclusion in these universes of what would ostensibly make such an endeavor even more difficult than it usually already is: mortals, labyrinths...The third chapter is concerned with creating and then dispersing universes that don't fall apart "two days" later even when dancers are introduced in them.

Thursday, February 27
5–7pm
By registration: The Whole Earth: Antinomies of the Anthropocene, workshop with Anselm Franke
In this workshop, we will think through the critique of Cartesian modernity and its binaries, and place this critique within the historical context of the second half of the 20th century, of decolonization and the rise of ecology and network-capitalism.

Anton Vidokle and Pelin Tan's 2084 is an ongoing exploration of the history of the future, translated into films. In Episode 3, filmed last summer in Turkey, Vidokle and Tan refer to the circle of ideas of Cosmo-Immortalism, a vitalist philosophical movement of early 20th century, which strongly influenced the Communist Revolution. The script for the film, narrated by a donkey and a plant, is a collage of texts by and about scientists: Vladimir Vernadsky, one of the most ardent partisans of the idea of the "noosphere"—a sphere formed by human reason around the surface of our planet, and Konstantin Tsiolkovsky, the intellectual father of Soviet space exploration.

Friday, February 28
2–4pm & 5–7pm
By registration: Internet as Ideology, workshop with Brian Kuan Wood
What is the Internet, seriously, and what does it want from us?

Every Tuesday from March 4 till April 1
6:30pm
By registration: "Creating and Dispersing Universes that Include Dancers"
Weekly seminar in 5 sessions with Jalal Toufic

8pm
Public: Tilikum, 2013, screening and conversation with Jan Peter Hammer
During the second half of the last century dolphins and orcas became a projection screen for all kinds of scientific fantasies: John C. Lilly tried to teach the animals English and the NASA believed they could communicate with aliens. Tilikum is a video documentary that connects marine mammal research with behaviorism, animal conditioning, early neuroscience, Hollywood, sensory deprivation and LSD experimentation.

Thursday, March 13
8pm
Public: "Animism and Cybernetics: From Engineering to Economics and Back Again," talk by Ana Teixeira Pinto
How the treatment of feedback as a conceptual abstraction became the scientific ideology of Neoliberalism and the case of the missing pigeon.

8pm
Public: "Animals and Revolution," lecture by Oxana Timofeeva
What is a revolutionary project, from animals' perspective? The lecture addresses this question, analyzing problems of unconscious subjectivity and collective desire with its persistent negativity in such different authors as Hegel or Andrey Platonov, in order to expose both a utopian horizon of animality, and a bestial horizon of utopia, and, at the same time, an urgency of a certain politics of the unconscious.

Friday, March 21
8pm
Public: "Delusions of Reference: In Defense of Art (Part 2)," lecture by Sarah Rifky
Ideas grow; they become delusions, of reference. They unravel to the point where…everything makes sense, and everything has a spirit. In the disorders of thought when language fails to produce meaning, convictions rise to define psychosis. They say: the victim of language is "spoken" by it. But what if this language is art? This essay-lecture probes this experience of making sense.