Driven by a frustration of mechanisms hidden and unknown, Hunt is repeatedly making these expectations to collide and lay open their absurdities. "Bra-vo, oh bra-vo!" is a setting not just of dissimulation but of self-dissimulation. 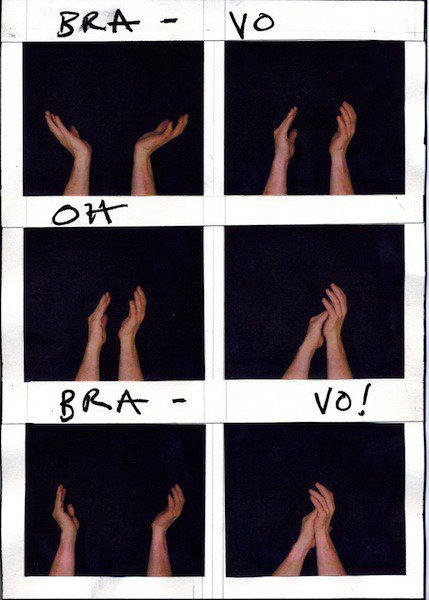 We are very honoured to announce our third solo exhibition with English artist William Hunt (*1977) at Rotwand.

Many things we agree upon as knowledge are on a closer look but vague assumptions. And in the moment we stretch out to grasp a fragment of the world, perception too becomes suspect since what we believe is true is seldom consistent with what is available to the senses. Can we even know that things exist? The fact that we cannot know the things themselves doesn’t mean that we cannot know at all, but it seems we are destined to attend to the meaning of experiences rather than the meaning of things.

In a painting by Joseph Wright of Derby, An Experiment on a Bird in the Air Pump (1768), a small group of people has gathered around a table, on the table is a construction that looks like a pedestal, on the pedestal a fairly large sphere made of glass and inside the sphere, a bird tormented by pain and seemingly about to die. It depicts one of the scientist Robert Boyle’s famous air pump experiments, which investigates to what extent a living animal is dependent on air. Boyle writes in his notes that the bird for a while appeared lively, upon a greater extraction of air he began to droop and appear sick and was very soon taken with violent and irregular convulsions.

The bird in the sphere, is William Hunt. Perhaps more curious than Boyle, or just reckless, Hunt locks himself into the sphere and somehow manages to start the extraction of air and while the atmosphere is getting thinner and thinner he is twittering as if this was a bright and sparkling morning in spring with a smell of blooming trees and a faint promise of unspeakable beauty. Of course, it is also a shift of perspective from things to experiences, which adds a great deal of ambivalence for the audience.

While Boyle’s scientific theatre asks the audience to witness the workings of nature to guarantee the objectivity of empiricism, Hunt attempts to disclose the meaning of the object’s experience. That is, to put himself in place of the object and act out the preconceptions of Nature, whether it is a mysterious source of dreams and desires or a set of properties that constitutes the material world. Driven by a frustration of mechanisms hidden and unknown, Hunt is repeatedly making these expectations to collide and lay open their absurdities.

"BRA-VO, OH BRA – VO!" is a quite intricate arrangement that flips the world upside down just to turn it back again. The actions taking place can be viewed through a hole in the wall which is a also the transition from one perception of reality to another—a camera obscura that projects the performance into the public. On first glance the show seems to be designed to illustrate the obvious limitations of human existence, like Plato’s cave. Hunt’s cavern is however not simply a natural setting, in its organization it is fabricated and technical and the fettered man is already enlightened. He is running the show well aware that the world he upholds is but a Fata Morgana and that he himself is yet another form casting a shadow on a wall. Instead of breaking loose from his shackles and escape to the real world as Plato would suggest, he appears to be mocking himself and his imaginative audience. Not even bothering to hide his trick he is well aware that he is upside down and that the constant applause are but mechanical effects. "BRA-VO, OH BRA – VO!" is a setting not just of dissimulation but of self-dissimulation. It challenges the “self” of self-presence by reduplicating it in a deluded movement that never come to full circle.

The performance But it was not to be will be ongoing during the whole opening and the audience members are free to come and go.