A book between two stools

As for the book, there is no dearth of words underscoring the intimate relation between the chair and the human body and the cultural context which it is part of. The chair has referred to symbolic practices ever since humanity became sedentarized. An exhibition bringing together books and chairs art objects. 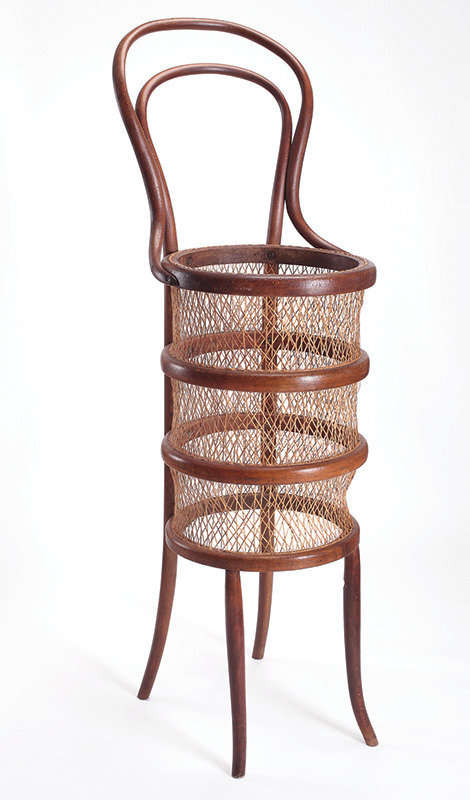 For two millennia the book has been expressing a set of world values and representations.
In the 1st century CE, the appearance of the codex marked nothing less than a revolution in Rome, as it made the use of the scroll gradually obsolete.

The world is a huge book, observed the mystical philosopher Ibn Arabi in the 12th century.
In the West it was also during the 12th century that books started to be divided into chapters, with a logical sequence and an overall plan. But beyond its contents, texts and images, the book presents a material form peculiar unto it. It is probably and above all this material form that explains its lasting success. The book came about from the fold, which enables it to stay upright, and be opened and closed. The fold divides spaces without separating them, at once apart and together, face to face, front and back, outside and inside, all brought together in one and the same volume. Otherwise put, the book makes it possible to think about the continuous in discontinuity, and the discontinuous and continuity.
With the general upsurge of electronics, since the screen has been competing with the realm of paper, and despite all the various fears expressed, the book that perceptible object is holding its own.

As a supreme cultural object, the book introduces into our thinking and our behaviour a special relation to time, the body, truth and the world which it contains and reveals. It thus contrasts with the computer which, without beginning or end, broadcasts truths which are many and varied, temporary, and constantly unfulfilled. Its organic body, made of hide and paper, glue, ink and thread, introduces a physical, intimate relation which no electronic object will ever be able to offer. Devouring a book is not just a metaphor and the vocabulary of the book often reveals its kinship with the human body, conjuring up the head, the skin, the back, and the nerves It is not surprising, nowadays, that a great many artists have developed a deep interest in the book and its material form, transforming it, manipulating it, and appropriating it with their various forms of inspiration.

Opposite the book, and with it : the chair !

As for the book, there is no dearth of words underscoring the intimate relation between the chair and the human body and the cultural context which it is part of. The chair has referred to symbolic practices ever since humanity became sedentarized. Historically associated with power, it has acted as a throne since Antiquity, though this has not barred it from other uses. Its material and symbolic hierarchies can be found in every period in civil and domestic life, where armchairs, chairs, benches and stools earmark the rank of their users and their specific functions. Like the book, the chair has been a source of inspiration and creation for many artists, while craftsmen and designers have produced it in a thousand and one ways.

An exhibition bringing together books and chairs art objects

Books and chairs are essential objects of mediation between people. In the spirit of the Fondation Boghossian, the term objects of dialogue springs readily to mind! Together, they extend human capacities for communication in space and time.
By proposing this exhibition which includes almost 200 books and chairs created by artists hailing from different cultures, the public is invited to react to these symbolic reflections and meanings.
But how are we to exhibit books which cannot be read, and chairs which cannot be sat upon? The chair is always seated, declared the Surrealist poet Achille Chavée
The public is now invited on an interactive circuit where people can read and rest during their visit.

At times solemn and moving, at others droll and unexpected, the artwork-objects brought together for this exhibition at the Villa Empain form a surprising ensemble. Here, between two chairs, there is always a book, a link, a sense of wonder, and an invitation to dialogue.

Most of the works on view in this exhibition come from a private Belgian collection, which in itself forms nothing less than a living body, a world in motion where the freest and most diversified imagination reigns.

The selected artists are

A richly illustrated catalogue is being published for the exhibition.

Several events and activities are planned during this show, including :

Boghossian Foundation - Villa Empain
Centre for Art and Dialogue between the cultures of the East and the West
Avenue Franklin Roosevelt 67, Brussels
Hours: open every day except Monday, from 10 am to 6.30 pm
Admission free