A Moveable feast - part VI. A series of works that reflect on the material fact and its specter of representation, the relationship between directness and mediation, and the architectural simulation involved in exhibition display. 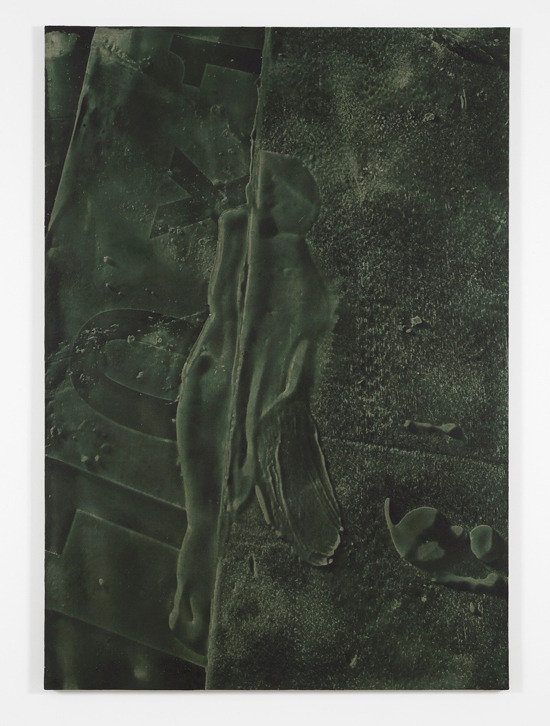 Campoli Presti is pleased to announce the sixth iteration of the ongoing exhibition A Moveable Feast with the display of the work Passive Surplus (2011) by Daniel Lefcourt. As in previous installments of A Moveable Feast, the exhibition focuses on one work that has been decisive in the artist’s practice.

Daniel Lefcourt produces surfaces of strange topography, often formed by material traces of his working process that are dispersed across the picture plane of each piece. The result is a series of works that reflect on the material fact and its specter of representation, the relationship between directness and mediation, and the architectural simulation involved in exhibition display.

The work on view is composed of a transparency projector (the outmoded technology once used for school and business presentations) pointing at a “screen” made of fibreboard that is installed in such a way that it resembles a painting or a large photograph. What is projected is not an image, but instead is actual sawdust that has been scattered directly onto the projector box. The hue of the wood in combination with the light of the projection creates a golden illumination of the transient aleatory composition.

Speaking to multiple disciplines and histories, Lefcourt considers Passive Surplus to be among the most significant of his works. It succinctly articulates the artist’s interests in physical and virtual surfaces; chance and other anti-compositional techniques; and the calculated manipulation of the conventions of exhibition design and display.

Daniel Lefcourt lives and works in New York. His work has been featured in numerous exhibitions including MoMA P.S.1; the Sculpture Center, Long Island City; ICA Philadelphia; de Young Museum, San Francisco; Malmö Konstmuseum and Kunst-Werke Berlin. In 2013 the Dia Art Foundation commissioned a web project by the artist. He received his MFA from Columbia University and is a member of the faculty of Rhode Island School of Design.