Marilyn. The work is, first and foremost, a persuasive argument to re-evaluate Western Sculpture in the long tradition of creating beauty and, more specifically, in its substance. 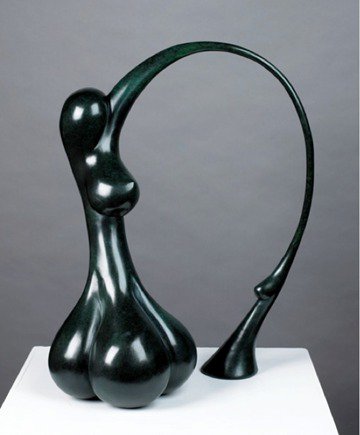 Collected by SAS Prince Albert II of Monaco, Helmut & Dana Swarovski, Michael Douglas & Catherine Zeta Jones… The british sculptor Richard Hudson began working with sculpture at a relatively late age after many years of travel. He has been focusing his work on the female figure but has of late worked with an abstract expression. His soft lines and voluptuous, nearly bombastic, style combine with inspiration from Modernism’s great names like Henry Moore, Jean Arp and Constantin Brancusi, which rocketed his career forward.The soft wavy lines and voluptuous forms in Marilyn Monroe reflect her lush femininity fortified by the sculpture’s high polish and reflecting surfaces. Still, there is something simple and primitive about his style that reminds us of fertility goddesses from earlier times.

His Work is, first and foremost, a persuasive argument to re‐evaluate Western Sculpture in the long tradition of creating beauty and, more specifically, in its substance.
Beauty unfolds through a sensory adventure, giving the viewer a sense of balance and harmony. A hallowed sense, which each culture has redefined in their own way over the course of history.
The history of art, sculptors has moulded feminine curves in search of reflecting the essence of woman: of her fertility, power and beauty of form.
Part of the aesthetic strategy of Richard Hudson Is to revive the exaggerated curves of the ancestral feminine archetype in all her sexual symbolism, with a modern twist that provokes our own capriciousness yet satisfies the need it creates.
Richard Hudson Is a master in working directly with his materials. He expands sculptural practice in his skill and workmanship and in the subtle balance of his forms. His Highly polished steel surfaces embrace and reflect their surroundings, while the enticing bronzes reach out to be caressed.

Richard Hudson is a world away from those conceptual practioners who have no physical contact with their work and who constantly re‐invent themselves. Richard Hudson Has earned the name artist through long contemplation, the solitude of the studio, the painstaking work of creating by hand. His is a different rhythm, one achieved through a true relationship with his materials and the visual stimulus of the world around him. Seductive and sensual, timeless yet contemporary.

“Whilst Brancusi, Arp or Moore inspire a great part of his sculptural work closer to the occidental tradition, the artist still allows space for the free interpretation of Duchamp’s or Warhol’s countersigns. Endowed with an incredible intuition and ability, sensual, ironic, unembarrassed... surreal with a Dadaist touches and the heart of a great romantic, Richard Hudson has, with no doubt a large sculptural imagination.” – Pilar Ribal – Simo January 2004, Art Critic

“Richard Hudson is an artist with a constant investigative tension. After exploring various paths in the sculptural field, he has arrived with work, that is bursting with a mature energy.” – Luis Maria Caruncho, From the Spanish and international Art Critics

“Hudson's direct engagement with his materials, the smooth highly polished surfaces, and the need to simplify, and reduce his forms to the emblematic, remind one of the work of Romanian Constantin Brancusi (1876-1957), also like Dada artist Jean Arp (1887-1966) he combines the elemental with a surreal humour." Lynne Green - Member the British Arts Council.

"The daring and ingenuity of Hudson's sculpted forms engage and delight us. Gravity-defying 'drawings in space' are the result" - Lynne Green- Member the British Arts Council