"Haim Steinbach: once again the world is flat" ncludes key works from his forty year career, during which he has re-defined the status of the object in art. "Martino Gamper: design is a state of mind" features a landscape of shelving systems, telling the story of design objects and their impact on our lives. 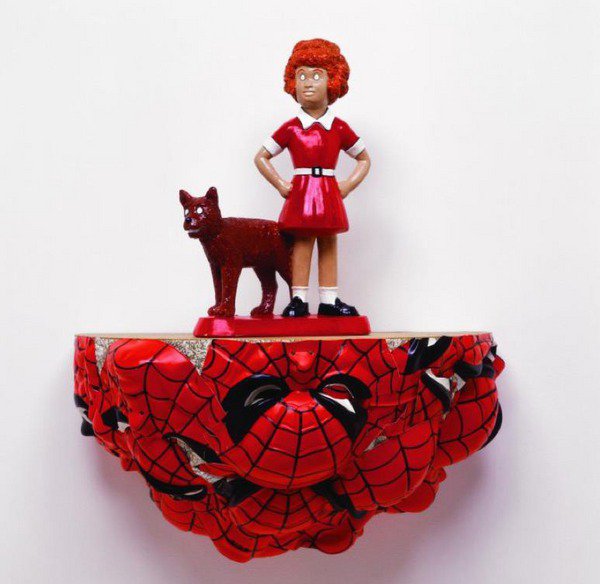 Haim Steinbach: once again the world is flat.

The show includes key works from his forty year career, during which he has re-defined the status of the object in art. On display will be major new works, reconfigured historical installations and a number of grid-based paintings from the early 1970s.

Up until the mid-1970s, Steinbach explored minimalism’s limitations through painting calculated placements of coloured bars around monochrome squares. He then abandoned painting to create work using the material linoleum, made to resemble a diverse range of historical floor designs. By the late 1970s, Steinbach had begun to investigate spatial questions, honing in on the daily rituals of collecting and arranging objects.

Steinbach's interest in the fundamental human practice of collecting is explored through his placing of objects from a variety of contexts on shelving units, which range from handmade constructions to modular building systems. For this exhibition Steinbach has also invited the public to participate by presenting their salt and pepper shakers in the exhibition, forming a new work for the exhibition. Each with their own history and story, the salt and pepper shakers carry meaning from a former context and, through their display, the connection between the private and the public sphere is made.

The Serpentine has also invited curators from a range of private and public institutions – including the Zabludowicz Collection and the V&A Museum of Childhood in London and Manchester’s Whitworth Art Gallery – to select works from their collections to be incorporated in the exhibition. Through juxtaposing paintings, sculpture, artefacts and children’s playthings, Steinbach uncovers alternative meanings inherent in the objects, while subverting traditional notions of display and hierarchy.

A ground-breaking presentation of design, curated by influential London-based Italian designer Martino Gamper, runs concurrently at the Serpentine Sackler Gallery. Furthering the Serpentine’s commitment to contemporary design – following Konstantin Grcic’s Design Real in 2009– both exhibitions highlight objects that have made a significant impact on our lives and offer new perspectives on material culture.

once again the world is flat. is programmed in collaboration with New York’s CCS Bard Hessel Museum of Art and the Kunsthalle Zürich. Following the Serpentine presentation the exhibition will travel to Zürich, where it will be transfigured once again.

Martino Gamper: design is a state of mind

design is a state of mind will present a landscape of shelving systems, telling the story of design objects and their impact on our lives. This is the second major design exhibition staged by the Serpentine, following Design Real curated by Konstantin Grcic in 2009.

Martino Gamper said: “There is no perfect design and there is no über-design. Objects talk to us personally. Some might be more functional than others, and the emotional attachment is very individual. This exhibition will showcase a very personal way of collecting and gathering objects – these are pieces that tell a tale.”

An extensive display of shelving systems from the 1930s to the present day will form the backbone of the exhibition. Ranging from historic design classics and one-off pieces, to industrial, utilitarian, contemporary and newly commissioned work, the exhibition will include designs by Gaetano Pesce, Ettore Sottsass, Ercol, Gio Ponti and IKEA.

Each display system will also be used to organise and exhibit collections of objects curated from the personal archives of Gamper’s friends and colleagues as well as an extensive library of contemporary furniture manufacturing catalogues from around the world. Among the designers whose collections will be displayed are: Oiva Toikka; Enzo Mari; Paul Neale; Max Lamb; Jane Dillon; Michael Marriott; Sebastian Bergne; Gemma Holt; Fabien Cappello; Adam Hills; Michael Anastassiades; Andrew McDonagh & Andreas Schmidt, Jerszy Seymour and Martino Gamper himself.

design is a state of mind runs concurrently with an expansive exhibition at the Serpentine Gallery by American artist Haim Steinbach, which will include key works from throughout his impressive forty year career. Furthering the Serpentine’s commitment to contemporary design, both exhibitions highlight objects that have made a significant impact on our lives and offer new perspectives on material culture.

Working across design and art venues, Martino Gamper engages in a variety of projects from exhibition design, interior design, specialist of one-off commissions and the design of mass-produced products for the cutting edge of the international furniture industry. Gamper has worked in the public realm, with designs for London’s Design Museum; Victoria & Albert Museum; Wellcome Trust; Yerba Buena Centre, San Francisco; Frieze Art Fair, London. Commissions include the design of public street furniture for Park-to-Park, London in collaboration with LTGDC, Genève and a chair called Vigna for Magis, Italy. He was the recipient of the Moroso Award for Contemporary Art, 2011 and Wallpaper Award for Best Use of Colour, 2011.