As a garden desires discipline. This exhibition examines selected mechanisms of introducing practices of social control which may be perceived as forms of internal colonization and which were necessary to the development of the capitalist economy within the European project. 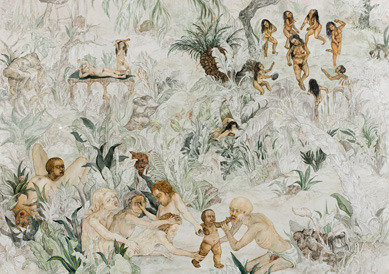 A machine desires instruction as a garden desires* discipline examines the mechanisms underlying modern capitalist Europe. Catalina Lozano invites us to reexamine and reevaluate historical facts and their present consequences (Keiller, Kirschner & Panos, Plender). Documentary narratives (Farocki), anthropological dis- course (Alves & Durham, Satorre), and metaphorical propositions (Lin, Weber) are combined in order to deconstruct Eurocentric certitudes. How does self-submission to fundamental dualism continue to persist? How do conventions and commands become interiorized? This is a true call to dismantle and perhaps do away with the binary vision of the world...
* The title of this work is borrowed from a 1996 work by Jimmie Durham.

A WORD FROM THE CURATOR
This exhibition examines selected mechanisms of introducing practices of social control which may be perceived as forms of internal colonization and which were necessary to the development of the capitalist economy within the European project. These mechanisms were accompanied by the internalization of an increasingly mechani- cal vision of the body, of society, and of political order. However, there was also popular resistance to the submission, which often entailed homogenization proper to the instauration of the first nation states.

The appropriation and accumulation of land, cultural and religious homogenization, hierarchical organization of territorial government, control over the reproduction and organization of the workforce... are forms of colonization exercised at different levels, introduced in the name of an ideological principle rooted in the opposing pairs of nature/humankind, body/soul–reason, following the secularization of the ideological essence of humanity.

This capitalist, modern mega-machine is contravened, hindered, and sometimes even crippled by assemblages of human and non-human elements, by collective subjectivities (Guattari), or by networks composed of hybrid elements (Latour). It can therefore be deconstructed if its mystical character is exposed and challenged, and if we debunk this binary, yet powerful, notion of the world.

The works featured in this exhibition, some of which allow us to grasp how topical these questions are, are not literal illustrations of a historical thesis. Rather, they address these questions accor- ding to the principle of contiguity, thus escaping any definitive or logical formulation that would attempt to indoctrinate the visitor.