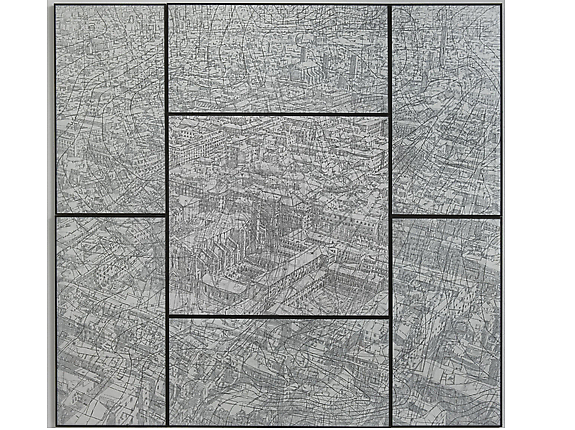 Elisabeth Scherffig: New Works“Initially interested in domestic interiors and the objects contained within them, Scherffig ultimately shifted her gaze to the (often overlooked) urban landscapes of our cities. During the course of her artistic research she has observed the natural and artificial elements of reality as living organisms in perpetual metamorphosis: her urban views, building sites, quarries and architectural complexes with their structural components representing the concrete manifestation of human endeavour, the passing of time and historical evolution.” G.L. Marcone

Faggionato is delighted to present a new body of work by the artist Elisabeth Scherffig. Showing in London for the fifth time, Scherffig has become recognized for her distinct ability to unearth, through the elemental process of mark-making – the most intrinsic features of form and matter observed in her subjects.

Describing matter minutely, Scherffig is able to transform the harshness of the materials she studies whether it is glass, rusted steel or industrial rubble, into a striking, gentle, dreamlike image –through the use simply of small repeated monochrome marks created by chalk lead.

The exhibition, will include works on paper, sculptures and those created using perforated steel, in each medium tracing a form of mapping, whether geographical, historical, intellectual or spiritual.

In the first series, the drawings, Scherffig takes the cities Milan, Düsseldorf and Bologna and composes of each a map of two of three layers. The first level corresponding to the oldest map, is provided a bridge by the middle – moving upwards towards the ‘contemporary’ level, the final perspective being that of the city from a bird’s eye view.

Though each work comprises references to only one city, the interchanging dominance of layers creates a form akin to an archaeological site, revealing a dichotomy between destruction and reconstruction, a subject so familiar to the artist. The sheets’ transparency hides the leading sign and yet reveals a labyrinth where one can slowly recognize the represented city.

“Maps express concepts close to my world: the city seen as a lively organism in constant mutation. This is all condensed in my drawings, whether they refer to the present or the past or the future.” Elisabeth Scherffig

In light of this statement, the sculpted heads – a series entitled “Geist und Sinn”, translated literally as “Mind and Spirit” – bear a mapping also, with the transparent silk marked by porcelain dust. These maps, as opposed to the historical, architectural traces in the cityscapes, relate to the thoughts and concerns that appear visually in the artist’s mind.

Similarly, the third series of works to be exhibited are steel surfaces, perforated and carved to transcribe the image of vineyards in winter – representing a temporal, seasonal mapping. One should read the drawings as structure and tangle, as if in an accidental weaving.

Born in Düsseldorf in 1949, Elisabeth Scherffig has lived and worked in Milan since 1970. She has exhibited extensively throughout Europe, and her work is in private collections in the USA, the UK and Europe.