How to write III

Artists read their texts. In the space you can hear recordings of texts by four artists, read by the artists themselves. They are all known as artists, but they consider their writings as essential: Arthur Kopcke, Dieter Roth, Tomas Schmit, Emmett Williams. 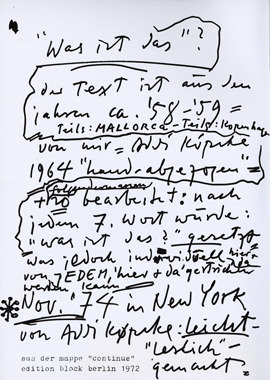 DR: .... the charm in life lies: in seeing how what we believe exists, does not exist and how we believe we talk about something and this also does not exist and how we cannot even talk about something and then we get so sad and this sadness has a kind of ... dope-effect. And it is this effect I am searching. Well, and how does this sound? (pours beer in his glass)
I L-H: It sounds beautiful -
DR: Doesn't it? Hahahah! The sad ones are much happier. I have to pee now. If I may. A sad act again. (from: Dieter Roth, Collected Interviews, 2002, interview by Irmelin Lebeer-Hossmann, 1976/1979)

how to write III is not an exhibition - there are no pictures, objects or films to see.

how to write III takes place in the four gallery spaces - you can hear recordings of texts by four artists - read by the artists themselves. They are all known as artists, but they consider their writings as essential.
They used and reshaped all possible literary forms - poems, prose, sonnets, essays, dialogues and interviews.

how to write III is the third part of our series of exhibitions about the matter artists who write.
With this series we celebrate the 25th anniversary of the gallery and bookshop Wien Lukatsch founded on the 10th of May 1988.

We thank all estates, galleries and publishers, who took care of the artists' readings and published some recordings.
We also thank everybody, who conserved unpublished recordings and thank the sound engineers for their commitment.