From Horse to Christo. This exhibition gathers together works through which Nam June Paik explored new realms of communication art and acknowledged changes to human environments nurtured by the emergence of new media. 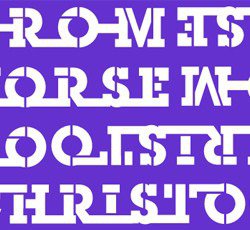 Titled From Horse to Christo, this exhibition gathers together works through which Nam June Paik explored new realms of communication art and acknowledged changes to human environments nurtured by the emergence of new media. Through these works, this exhibition offers an opportunity to consider true communication within evolving media environments in general and today's internet and smartphone-dominated reality in particular.

In his 1981 essay "From Horse to Christo," Paik examines how people transmitted information through messengers on horseback in a time when the means of communication and transportation were intertwined. Paik was one of the artists who thought that development of information technology will change human environment and these change will have an effect on the way of how people communicate. He comments on the changes brought about by the new media environment established by the emergence of television; and foreseeing the age of new technologies after TV and video, he also emphasized on psychic power, like telepathy, a genuine means of communication.

This essay exposes Paik's specific use of terminology and concepts. His use of language was so unique that his friends and fellow artists coined the term "Paikish." Paikish mainly consisted of mixing languages from many countries. Not only a symbolic reference to the various cultures Paik had passed through, Paikish was also an articulation of how the artist's philosophy was not necessarily to seek the perfect reception of messages. He suggested that 'noise' occurred in two-way communication, and mistranslation was also a way of delivering messages. Within this system, Paik gave equal importance to both the role of sender and that of the receiver.

Drawing from Paik's unique terminology, this exhibition proposes three approaches to exploring the issues inherent to media and communication:

Mal, Maeul, Maeum
In Korean, the word 'Mal' has two different meanings, 'word' and 'horse'; and 'Maeul' means 'village', and 'Maeum' means 'heart.' These terms reflect Paik's deep interest in how communication occurs and the history of how it changes. He often addressed how human civilization and art developed through exchanging languages and words, the most basic means of communication. This understanding ran through his different works, from his drawings with reference to the heart that he presented to his friends, to his video sculptures that heralded the beginning of a new civilization. For Paik, video art was the starting point of a journey exploring the relationship between communication and art.

Electronic Moon
In both Eastern and Western cultures, the moon is closely related to the cycle of human life. Moonlight symbolizes 'remote-vision,' a vision that provides long-distance viewing in the pre-TV age. Light in its broadest sense is a precious source in the human recognition of information. In the same way that people assimilated information from light filtering through the stained glass of a church in medieval times, we communicate information through the light emitted from the TV today. The TV, or the 20th century's electronic moon, is deeply embedded into our lives as a communication channel spreading and receiving rumors. Paik, acutely aware of the social influence of the new media of TV, produced many works that transformed the functions of the TV.

Video Common Market
Paik took a critical look into nationalistic character of TV broadcasts, often overemphasizing superiority of their own culture. He proposed that one of the reasons the United States lost the Vietnam War was due to a lack of understanding of Vietnam that resulted in failures of communication. In addition, the artist pointed out how prejudice towards other cultures could jeopardize world peace. In this context, Paik suggested, as a way of overcoming these situations, the idea of a video common market where TV programs consisting mainly of nonverbal communication forms, such as dance and music, could be instantly exchanged between those who were unable to communicate with each other. Paik never gave up the idea of understanding and communicating with other cultures because he firmly believed that it was crucial to an ecology where the human race could live together in harmony. Paik's many TV programs, such as Global Groove, Suite 212, and the live satellite broadcast shows including Wrap Around the World, are great achievements in the artist's constant challenge against 'one-way TV.'