An exploration of the decade-long collaboration between Dieter Roth and Arnulf Rainer, and a unique approach combining paper and canvas, stretched and bleached and incised. On view at the same time new works by Ellen Gallagher, encompassing painting, collage and film. 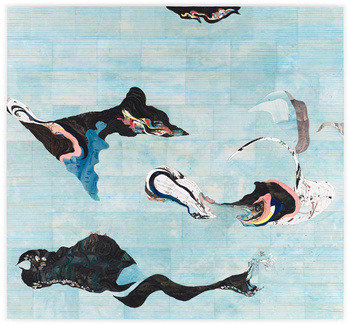 Hauser & Wirth presents an exhibition exploring the decade-long collaboration between Dieter Roth (1930 – 1998) and Arnulf Rainer (b. 1929). From 1972, Roth and Rainer worked together intermittently, producing pieces in tandem or exchanging works in progress which were then completed independently.

Roth and Rainer worked across media, producing drawings, collages, prints, films, live performances, sound works, over-worked photographs and poster designs. This exhibition focuses on a large group of works on paper, unveiling Dieter Roth’s share of the collaboration which has never been previously exhibited. A selection of the artists’ major film works will also be on view. The exhibition is curated by Björn Roth, son and longstanding collaborator of Dieter Roth.

The group of almost 80 works on paper reveals an artistic dialogue full of creative tension. As opposed to the harmonious nature characteristic of artistic collaboration, these works depict two egos battling for ultimate victory within the creative process. Their intellectual rivalry is evident in the voracious spirit that emanates from the resulting works.

Roth and Rainer were key figures in European avant-garde movements of the 1960s. When the pair met and began collaborating, Rainer was already established in the Austrian cultural scene and was linked to the artists who founded Galerie Grünangergasse. Roth was a frequent visitor to Vienna and was quickly accepted into the group. Creating work in the wake of Fluxus and Viennese Actionism, the collaborative projects of Roth and Rainer are centred around process, bodily action and an irreverence towards the artistic establishment.

A unique imperative within Roth and Rainer’s collaboration was that the work should be produced in complete freedom, with an absence of self-censorship and no social restrictions in place. One would pose a creative challenge to the other, thus setting off a highly energetic back-and-forth which caused absurd and increasingly incendiary reactions. Working without inhibitions, the artists were able to push past their individual boundaries and unleash a joint creative potential; the resulting works are impulsive, comical and alive with intensity. This creative principle is particularly evident in their film works, which present improvised exchanges amounting to an unrestrained portrayal of ego: Roth and Rainer perform a slapstick duel in ‘Duell im Schloss’ (Duel in the Castle) (1976), then, in Beckettian style, they endlessly prepare to act out a stunt involving a gymnast’s bar. The works on paper display a similar childlike playfulness; crude faces, animal ears, bottlecap spectacles and facial hair are scrawled on the surface of joint photographic portraits of the two artists.

Drawing was central to their project, as the immediacy of the medium lent itself to spontaneous acts of creation and to instant results. Their ideas were often conceived and executed on the spot and an entire series of work would usually be produced in a single session, whether it lasted a day or a matter of weeks.

The drawing techniques of both artists vary greatly, and in these works the graphic drawing style of Dieter Roth combines with the heavy gestural marks of Arnulf Rainer, whose short, dark lines refer back to his background in Abstract Expressionism. In ‘Trennzeichnung (Misch- u. Trennkunst)’ (Split Drawing) (1975), the drawing is literally separated into two halves, and the two artists’ input can be directly compared as one mimics the other, tracing horizontal lines from left to right, the left in a series thick black lines and in a lighter graphite on the right. Sometimes, both artists would even impersonate a fictional third artistic character in order to overcome discrepancies in their styles. The contradiction of two opposing forces within these works is sometimes resolved in a surprising way, for example in ‘Tripel (Misch- u. Trennkunst)’ (Triple) (1975), where accidental shapes created by wild, scribbled abstract gestures have been reined-in and reworked as a figure in profile using neat crayon colouring.

‘Misch- und Trennkunst’ was the title of Roth and Rainer’s first collaborative exhibition at Galerie Grünangergasse, and it is the terminology that the two artists themselves used to describe their practice – a process of ‘Mixed and Separate Art’.

Dieter Roth is most celebrated for his artist books, printmaking and his body of work incorporating food. He later turned to large-scale sculptural installations, often working in collaboration with his son Björn Roth. Roth is also renowned for a number of other artistic collaborations he undertook throughout his career. Recent solo exhibitions include: ‘Processing the World’, FRAC Bretagne, Rennes cedex, France (2013); ‘Dieter Roth and Björn Roth – Islands’, Hangar Bicocca, Milan, Italy (2013), and ‘Wait, Later This Will All Be Nothing: Dieter Roth Editions’, MoMA Museum of Modern Art, New York NY (2013).

Arnulf Rainer’s early work is characterised by Surrealist influences. He showed an avid interest in the subconscious and in exposing bourgeois repression through his practice. An active member of the European Abstract Expressionist movement, Arnulf Rainer was awarded the Great Austrian National Prize in 1978 and he represented Austria in the 1980 Venice Biennale. Following the dissolution of the collaboration with Dieter Roth, Rainer continued to explore photography as a central tool within his practice.

A catalogue edited by Barry Rosen with texts by Björn Roth and Robert Fleck accompanies the exhibition, published by Snoeck (2014).

The exhibition brings together paintings that, with Gallagher’s unique approach, combine paper and canvas, stretched and bleached and incised. Striated areas, mimicking machine-printed lines, contrast with expressive accumulations of ink-stained printed matter. Using slivered cuttings of found fragments to extend rambling seascape-like abstractions which read like pictographic texts, Gallagher isolates individual brutalist forms within an otherwise diaphanous expanse: a cartoonish visage hovers against double barred lines in ‘Dr. Blowfin’s Storm’ (2014); and in ‘Stabilizing Spheres’ (2014), sooty medusas stand against blocks of stretched arcs forming a hieroglyphic language breaking over and under the undulating web of Penmanship paper. In ‘Untitled’ (2013), Gallagher draws us to the ocean floor where the textured fragments suggest multiple versions of a single event gravitating together within the components of her phantom creatures, constantly pulling forward and retracting with the ocean’s tide. Gallagher’s synergistic painting process extends to the titles of her works. ‘Dr. Blowfins’ Black Storm Stabilizing Spheres’ is a single track from Harnessed The Storm, the 2002 EP by the experimental musical duo Drexciya. Here, Gallagher divides the title into two interlocking but discreet works.

A similar process of de-multiplication is found in ‘Ark’ (2014), a double-sided paper construction made up of layered magazine pages, which are glued together to form a dense accumulation of sealed pages. One side is painted over in heavy white gouache and the printed pages underneath bleed through to produce an uneven pinkish tone. The other side originates in an advertisement for Cutty Sark whisky. Using a scalpel, Gallagher removes small paper forms, before turning them back-to-front and re-inserting them into the absent spaces. The configuration of the painted side depends on the amnesia of its opposite side, with the effect that both sides of the work are interdependent – coactively making and unmaking each other.

In another series of paintings, Gallagher foregrounds the symbiotic feeding habits of certain birds she has observed into the apprehension of the painting’s surface. Gallagher’s birds are embedded in a swirling mass of distended, intestinal coils buried deep within layers of paint. Her painted layers are incised and repeatedly re-applied and scratched away, releasing the buried needle incisions to the surface of the painting as oblique passages that recall snail trails. Garbled vowels are revealed from within the bird’s wings, or used to create speckled backs.

Edgar Cleijne and Ellen Gallagher’s new film projection explores what the artists call ‘different aspects of representation’, drawing its title from Sun Ra’s 1970 album and poem ‘Nothing Is …’. A line from the poem, ‘The nothing and the air and the fire are really the same’ describes Sun Ra’s thoughts on origins and elements teetering on the brink of multiple states simultaneously being and not-being. The mutability of elements is also a source of inspiration for science fiction writer Samuel R. Delany, who figures in the film on either side of Sun Ra’s poetry; the two men converge in a state of transition, possessed by light as the film moves from one frame to the next. The finely detailed work combines manual dexterity with technological mastery: the film itself is threaded through a hand-made harp tuned to the key of Ra.