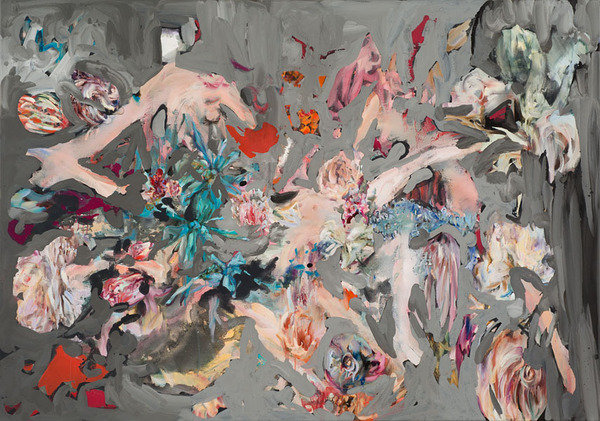 Galerie Judin is pleased to present The Disappearance, the first solo exhibition in the gallery of Alisa Margolis.
Margolis’ paintings rise from simple beginnings: flowers, the baroque, glam rock, fashion magazine ads, satellite photos of far off galaxies, heavy metal, cheerleaders, and Dutch vanitas painting among them, lining her studio floor on overlapping pieces of copy paper. The banal is central to the organization of her major tropes. However, where one’s typical Gen-Xer might approach banality by casting it aside with a heavy dose of irony, Margolis’ position is one of earnestness. She lets herself become seduced by the very canniness of her themes, to take them on with almost religious dedication.

Her so-called bouquet works dominate The Disappearance with their explosively colorful, floral motifs, which dissolve into pure abstraction on approach. They are at once bouquets, fiery explosions, and homage to the modernist’s handbook of gestural abstraction. However, it’s at close range that one can piece together the next stage in Margolis’ artistic development. That began, oddly enough, catching images on the internet of concerts by the flamboyant, heavy metal band Kiss. In an attempt to conceive of a cathedral for the present day, Margolis dove into the fan-zines and websites that surround the band and became subsumed in both the kitsch — flashing colored lights, flying face painted band members hanging from hand-hoisted ropes, the gritty screeching music — and the spectacle’s calculated reliability; every concert she watched no matter from the 70s or 00s featured a nearly identical replication of the act.

The band itself — and other musical points of repair like Axl Rose — makes only cursory appearances in Margolis’ paintings. A composition of ghostly silhouette may have a Kiss-like air, or stage lights may seem to strobe on the painting’s surface. The band’s methodology and affect has become deeply sown into the fabric of Margolis’ art, however. The works bank on this contemporary version of the smells and bells of the church, their reassuring and memory-jolting potentiality. Her paintings simultaneously exert a conservative impulse, a hope that despite our wealth of knowledge brought on by an ever-more digital world, wonder and indeed belief in these simple moments of spectacle whether they be supernatural, scientific, hard rock, or painting for that matter can be preserved.

Born in the former Soviet Union in 1975, Margolis immigrated to New York with her family at the age of four. And, though her art pulls mainly from Western European and American traditions, her Soviet roots shine through. The paintings’ floral motifs and intricate detailing recall the enameled serving platters and craft objects of that tradition.

Upon moving to Amsterdam in 2001 to take up residence at De Ateliers after having previously graduated from Columbia University in New York, Margolis snatched upon this attraction. She departed from a previous practice that saw cheerleaders stacked high like some towering homage to the high school nightmare and began making monumental floral canvases up to three meters in length. Her works have remained large, nearly always addressing their viewer at one-to-one, human scale.