Doppelgaenger 3/3. The exposition comprises works produced and selected according to two lines of approach: the first group shares the novel's kaleidoscopic movement and the second revolves around the book form, the most suited to transcribing polyphony. 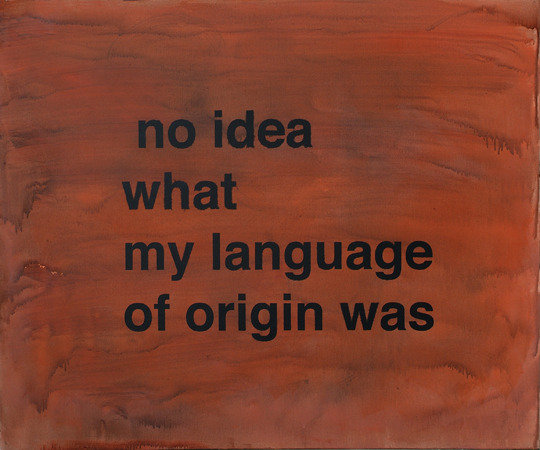 'Every time the world is described a little differently,' wrote Claude Simon to his publisher Jérôme Lindon in 1980, 'it changes.' A quotation that could sum up the spirit of this cycle of three exhibitions at CEAAC since late 2012. It may be that literature expresses more directly the effects we attribute to art, not only drastically altering our way of seeing the world, but also thoroughly changing that world (rather than just changing us). This is why, throughout a cycle in which each exhibition was linked to a textual arcana, we wanted to set visual forms resonating with a certain mode of thought, one specifically conveyed by a book. Here, perhaps, was the double, the Doppelgänger, with what we wanted to say already present in the way we had chosen to say it. A double, though, is not merely a rending, a lack, an abyss; it is a distinct form, just as, to quote Claude Simon again, 'a book is also very much the idea of a form.'

The exposition Le Paravent de Salses / The Salses Screen takes its name from the folding screen Claude Simon had covered with cut-out images in his house in Salses, in the Western Pyrenees. The screen's fragility meant it could not be put on show here, as it could not, either, at the various events marking the centenary of the writer's birth. Thus the absent object provides the title for this final segment of the cycle, sharing the exhibition's ambiguities (separation and splitting) and foregrounding them anew as it heralds its forms—paginated and printed—and its effects: production and possible fusion of spaces.

This last exhibition borrows more particularly from Simon's novel The Georgics for its polyphonic structure and its form (but not its subject matter), in which the double is but one phase in a process of broader proliferation. Le Paravent de Salses comprises works produced and selected according to two lines of approach—and with no concern with formal unity: the first group shares the novel's kaleidoscopic movement (Félicia Atkinson, Julien Crépieux, Chloé Quenum) and the second revolves around the book form, the most suited to transcribing polyphony (Jérémie Bonnefous, David Lamelas, Stéphane Le Mercier), the sole exception being a mix of the two (Lauris Paulus).

CEAAC
7, rue de l'Abreuvoir
F-67 000 Strasbourg France
Open from Wednesday to Sunday, from 2pm to 6pm, closed on public holidays and during the month of August
Free entry to exhibitions