Eva Kotatkova and Dominik Lang are collaborating for the first time on Wasteland, a new work that will transform the gallery into a hypothetical place: a model or a testing chamber; an exaggerated or elongated study of the forms, systems, rules and restrictions which define the institutions that surround us. 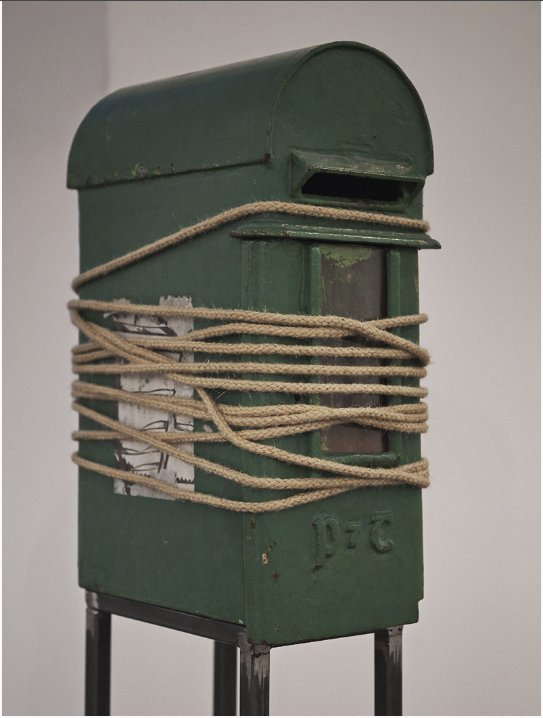 Wasteland is a newly commissioned exhibition by Czech artists Eva Koťátková and Dominik Lang. It is accompanied by Theatre of Speaking Objects – Eva Koťátková, an installation running daily in our Cube theatre space until 14 February.

Eva Koťátková and Dominik Lang are both fascinated by the institutional characteristics of the pervasive systems that shape and determine our lives. At Project Arts Centre, the two Czech artists are collaborating for the first time on Wasteland, a new work that will transform the gallery into a hypothetical place: a model or a testing chamber; an exaggerated or elongated study of the forms, systems, rules and restrictions which define the institutions that surround us. This place they are building suggests at once a storage yard, a ghost estate, a repository of ideas and methodologies that have passed, but whose remains prompt us towards an inner logic that reveals – or obscures – their purpose. Wasteland will be filled with ‘humble objects’ (Lang), ‘institutional rules’ (Koťátková), structures, scaffolding, geometric forms, phantoms, imagined items and salvaged things. These create a vocabulary of forms that might remain after an object has been modified or taken apart, or after an institution has been wound down – abandoned forms that remain without anyone to witness them or to respond, but which recreate the daily illusion of order through institutional rules.

Eva Koťátková’s daily drawing practice involves cutting, collaging, splicing and marking. Her installations and sculptures are underpinned by similar processes, where objects and subject matter are found, fabricated, captured or suggested, stimulated by the practices and accumulated evidence from institutions of psychiatry, education and indeed theatre, and infused with the psychological and physical effects of restraint, moulding and manipulation. Koťátková is constantly exploring the body through gesture, language (and its limitations) and architecture.

Dominik Lang has located many of his previous works in the architecture, infrastructure or politics of the artworld as social institution. The alteration or ‘correction’ of aspects of architecture (the level of the floor, positioning of a staircase or function of certain museum rooms) are areas he has sought to adjust. From the troves of Czech history of art to the overflowing shelves of his family home, the life and exploration of historical objects repeatedly surface throughout his practice, and the way in which these histories are accessed, understood, and abstracted are an enduring field of interest.

Eva Koťátková and Dominik Lang join Project Arts Centre in thanking the many individuals and organisations that have supported these projects, including the voices lent by Nyree Yergainharsian, Jose Miguel Jimenez, Robert McDermott, Cian O’Brien, Noelle Brown, Sarah Pierce and Hugo Byrne, Annette Devoy and Jasmin Maher. Further warm thanks to Christy Maher, Dublin City Council Eamonn Ceannt Park, Galerie Hunt Kastner in Prague, and to the generosity of the Irish Museum of Modern Art in providing a Production Residency for Koťátková and Lang during their time in Dublin.

Curated by Tessa Giblin, with warm thanks to David Upton, Assistant Curator of Visual Arts.

Eva Kot’átková has exhibited in the recent international exhibitions of Venice Biennale (2013), Moscow Biennale (2013), Sydney Biennale (2012) and Lyon Biennale (2011), as well as making solo exhibitions at Modern Art Oxford and Kunstverein Braunschweig in 2013, amongst others. She studied at the Prague Academy of Fine Arts, Prague Academy of Applied Arts, San Francisco Art Institute and Akademie Bildende Kunst Wien from 2002-2007. In 2007 she became the youngest artist ever to be awarded the Jindrich Chalupecky Award for young artists in the Czech Republic.