Paris sans fin. The complete suite of lithographs Paris sans fin together with key sculptures, paintings, drawings, photographs, and archival material from the same period, shedding new light on the creation of one of the major artist's books of the twentieth century. 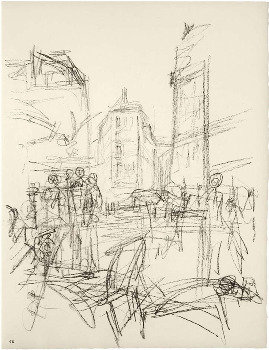 Oh! the desire to do pictures of Paris, a little everywhere, there where life has led me, or would leave me, the only way for all this my lithograph crayon, not painting or drawing, just this crayon for capturing on the spot, with no chance of ever erasing or revising, my first impressions.
—Alberto Giacometti

Gagosian Hong Kong is pleased to present Alberto Giacometti's complete suite of lithographs Paris sans fin (Paris without end) together with key sculptures, paintings, drawings, photographs, and archival material from the same period, shedding new light on the creation of one of the major artist's books of the twentieth century.

From the 1930s until his death in 1966, Giacometti continuously investigated the possibilities of accurately representing what he saw before him. “Giacometti: Without End” celebrates his favorite city and people in 150 lithographs with text, produced for a diaristic artist’s book between 1959 and 1965. The initial maquette, as well as rare lithographs and drawings intended for the book, are exhibited here for the first time. Also on view are several important bronze sculptures, including Diego (tête au col roulé) (c. 1954) and Annette assise (petite) (1956); and paintings such as Caroline (1965). Original manuscripts and a selection of photographic portraits by Henri Cartier-Bresson, Eli Lotar, Jack Nisberg, and others provide a contextual backdrop for this book project that occupied Giacometti for nearly six years.

Giacometti’s major undertaking was spurred and encouraged by the publisher Tériade, a close friend and supporter from the time he singled the artist out thirty years earlier in his role as art critic. Just prior to this, Tériade produced Fernand Léger's La Ville, a book of lithographs that also took the city as its subject. Unlike Léger’s urban labyrinths, Giacometti’s impressions are a shorthand visual account of his daily life—in the studio and in cafés, on the grands boulevards, at the printer Mourlot’s new shop—that demonstrate his unassuming virtuosity. As Mourlot recalled, the range of grey tones that imbue these illustrations with the foggy haze of the city is itself a technical feat.

As in his previous lithographic work, Giacometti did not draw directly onto limestone, as is the traditional method, but onto thin sheets of transfer paper, allowing for easier portability and a more accurate reproduction of the original drawing. He characterized the series as “images and memories of images,” an apt description of the volatile, fleeting scenes: intersections jammed with cars are depicted alongside crisscrossing electric cables and elevated railways; historic buildings surrounded by these symbols of change are rendered in nearly flat perspective. Giacometti’s immediate approach treats a grand montage of models and unfinished works in the solitude of the studio; friends and family in motion; the towers of Saint Sulpice; and the Boulevard Montparnasse, where he frequented the Dome and Sélect brasseries. This grayscale conflation of past and present, old and new, is reflected in his contemplative notes, written to accompany the drawings in the twilight of his life:

The silence, I’m alone here, outside there’s the night, everything is still and sleep is starting to return. I don’t know who I am nor what I’m doing nor what I want, I don’t know if I’m old or young, maybe I’ve got hundreds of thousands of years to live, my past is disappearing into a grey abyss...

The exhibition, curated by Veronique Wiesinger, is accompanied by a fully illustrated book and has been organized in collaboration with Fondation Alberto et Annette Giacometti, Paris.