Cigarettes and other Non-Alcoholic Beverages. The artist explores themes related to identity and to the artist's own relationship to historiography. He has created a new, site-specific video work: a regional talk-show. 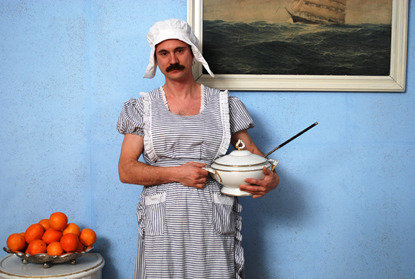 Wilhelm Klotzek's art operates within a space defined by the poles of sculpture and text and explores themes related to identity and to the artist's own relationship to historiography. In this context, he makes use of various media-such as performance, sculpture, video, installation, prose poetry, and the artist's book-and grasps language in terms of a sculptural material. Born in East Berlin, he experienced German reunification and the post-reunification period as a child and adolescent. His personal path through life-the rupture of moving from one societal system into another-and also an unnostalgic, analytical view of more recent German history both serve as points of departure for his artistic practice. The motif of failure is present in almost every work, sometimes obviously, or sometimes only implicitly, but always invested with the empathy of the artist.

Klotzek has created a new, site-specific video work for the exhibition in Wiesbaden. For KINEMATOGRAFISCHER DIALOG. HESSEN JETZT! (Cinematographic Dialogue: Hesse Now!), he has designed a regional talk-show set where the host, played by the artist, interviews the fictive director Wilfried Maria Kehraus about his drawn-out film project based on Thomas Mann's 'Buddenbrooks'. In 1978, a film version of the novel really was created by the Hessischer Rundfunk broadcasting company in Wiesbaden's Villa Clementine, which is located in the same neighborhood as the Nassauischer Kunstverein. Drawing on this context, both the design of the set in Klotzek's video and the stereotypical figure of Wilfried Maria Kehraus seem to belong to the past and to a time when intellectual debates between primarily male protagonists representing a genial-moral authority were broadcast in prime time by major television networks. Klotzek progressively picks apart this stereotypical figure of the creative genius and finally reduces him to absurdity through the presentation of a handful of sequences from the Buddenbrooks film.

In another site-specific work of 2014, Klotzek develops a campaign for the capital of Hesse. DUNSTRAUM WIESBADEN. EINE STADT RAUCHT (Foggy Wiesbaden: A City Smokes) promotes Wiesbaden as the European Capital of Smoking 2014-a vision that the artist has, among other things, smelted into enamel signs and with which he once more takes up a theme that he has dealt with in previous works: Smoking, which is not only treated by Klotzek as signifier of a bygone era (and aura)-whose most illustrious representative may be Germany's chain-smoking former chancellor Helmut Schmidt-but which also develops a personal dimension related to Klotzek's own biography. Wilfried Maria Kehraus, the smoking director figure from KINEMATOGRAFISCHER DIALOG. HESSEN JETZT!, serves as co-initiator of DUNSTRAUM WIESBADEN. EINE STADT RAUCHT; in this way, Klotzek ties the two works into a single narrative thread.

In addition to the new works created specifically for Wiesbaden, the exhibition also presents an overview of Klotzek's diverse prior work, in which Berlin-the city where he was born and lives, but also the site of revolutionary historical events, paradoxes, and political divisions-serves as a reference point. Alongside the SCULPTRINES (2010), a group of abortive sculptures on pedestals whose form develops out of the typical shapes of the paving stones used for Berlin's sidewalks-known as 'bones,' 'miters,' and 'Charlottenburgers'-and which extend the semantic content of this term of reference, the installation OSTPRO (2010) will also be shown. This work makes reference to an annual consumer fair for products from eastern Germany: Klotzek converts them into a diffuse form situated behind yellow-colored crown glass. The three-channel video installation DAS ARCHITEKTONISCHE TRIO (The Architectonic Trio) (2012) takes an entertaining look at urbanistic changes in the style of a seemingly old-fashioned TV discussion panel in which Klotzek repeatedly and grotesquely exaggerates the characters. Other works in the exhibition include a selection of lamp sculptures and a poem written and recited by the artist. As a part of the 14th Short Night of Wiesbaden Galleries and Museums, performances featuring Wilhelm Klotzek will also be held on April 5th, at 7, 9, and 11 p.m.

Wilhelm Klotzek was awarded the Columbus Young Artists' Award for Contemporary Art in cooperation with the ADVK, the professional organization of German art associations, in 2013. This award, granted for the second time in this form, involves a 30,000 euro cash prize and is open to artists at the end of their academic education or still at the beginning of their careers as artists. In addition to a monthly sum provided to the recipient of the award, he or she is also supported in the form of a solo exhibition, held by a different member of the ADKV every year, and a substantial publication. Wilhelm Klotzek graduated at the Weissensee Kunsthochschule Berlin. The exhibition at the Nassauischer Kunstverein Wiesbaden is Wilhelm Klotzek's first institutional solo exhibition in Germany.

An artist's book will be published to accompany the exhibition.