The group exhibition explores contemporary Chinese spiritual and cultural values through artworks inspired by the spirituality of nature and Chinese traditional culture. 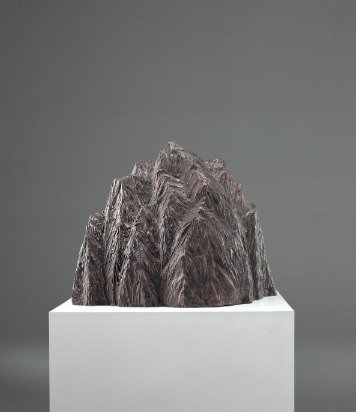 Instead of looking to the West, these artists look within their own culture for inspiration. Since ancient times, the Chinese have held a deep fascination with nature and landscapes, using them to express the psyche and inner spirituality. Literati have long used mountains in particular to communicate a bold, masculine spirit. These artists continue the tradition with their installation, sculpture, ink painting, and oil painting works, which embody the spirituality of nature and vitality of mountains. While some works literally depict scenes of nature, others realise its essence and strength in an abstract way.

Highlights include Xu Bing’s 5.5 metre long Mustard Seed Garden Landscape Scroll (2010), which was exhibited at the Museum of Fine Arts in Boston. In this work, the internationally acclaimed artist lifts landscape motifs, such as leaves, rocks and mountains, from a 17th century Chinese landscape painting manual, complete with instructional text, and rearranges them to form a new landscape composition, which he proceeds to carve onto woodblocks and print onto rice paper. While art students learn landscape painting by replicating, Xu reveals the creative possibilities of copying which is very much relevant in China today.

Xia Xiaowan’s glass installation Landscape—Taihu Rock (2007) uses 18 pieces of 6 mm glass to create a three-dimensional painting of a scholar’s rock (also known as a spirit stone), which is valued for its beauty and ability to connect its beholder with nature and spiritual aspirations. Xia’s technique allows audiences to view the rock from multiple angles, playing with space and perspective.

Zhang Wei, who studied sculpture in the former USSR, will make his Hong Kong debut with six bronze sculptures which depict majestic mountains and plateaus, symbolising the power of the Chinese spirit.

Su Xinping’s oil on canvas paintings from his Grey and Landscape series are allegorical, yet also infused with a surreal ambiguity. The desolate landscapes allude to the harmful effects of rapid modernisation in China, while also conveying his inner soul and roots in the northern grasslands.

Jizi, Wang Huangsheng, and Lan Zhenghui have created diverse works all using ink on Xuan paper and their works flow with the liveliness of the medium. Jizi, who is exhibiting in Hong Kong for the first time, infuses his landscapes with colour and free brushstrokes, creating movement in time and space through layers of ink. His landscapes are less about actual scenes of mountains and more about the enduring essence of nature. Artist Wang Huangsheng, who is also the Director of the Art Museum of the Central Academy of Fine Arts, uses free flowing lines in his Flowing Imagery series. His meditative process captures emotions and translates them onto paper. Lan Zhenghui’s bold, heavy brushstrokes communicate the weight of power and spirituality in an abstract way, and will be on full view in works including a scroll that is over six metres long.

The curator Wang Chunchen says, “The spirit of China is comparable to that of a mountain, in that it is lasting, constant, and embodies indomitable perseverance and vitality. If it did not possess this charm and value, its natural landscapes would not be the chosen subject of so many artists’ works and their investment of decades of effort in artistic creation.”

Xu Bing
Since the 1980s, Xu Bing (b. 1955) has explored, dissected and analysed the numerous factors that hold Chinese culture together. He is known for large-scale installations and exploration of language, including the paradoxical nature of character configurations and manipulation of meaning. The internationally celebrated artist was a recipient of the MacArthur genius grant in 1999 and currently serves as vice president of the Central Academy of Fine Art in Beijing. His works have been collected by the National Art Museum of China (Beijing), the British Museum (London), the Museum of Modern Art (New York), the Museum of Contemporary Art (Los Angeles), and the Fukuoka Asian Art Museum, among other institutions.

Su Xinping
Su Xinping (b. 1960) has been exhibiting in solo exhibitions since 1990. With a background in printmaking and an earlier focus on figurative painting, Su began to experiment with landscape painting in 2006. He outlines the limitlessness of the human imagination and the mysteriousness of life’s fantasies through rendered views of northern grasslands, which go back to his Inner Mongolian roots. This reflects a type of spiritual longing and a move for self-redemption in hopes of finding solace for the soul, inherent in a generation of Chinese people who have experienced societal upheaval. Through subconscious release, Su’s large landscape series re-contemplates the source of the belief in finding one’s place and purpose that is present in Chinese culture. Su has had solo exhibitions at the Red Mansion Foundation (London), China Square Gallery (New York), Dolores De Sierra Gallery (Madrid), Red Gate Gallery (Beijing), Today Art Museum (Beijing), and the Shanghai Art Mus eum.

Jizi
Jizi (b. 1942) entered the practice of shan-shui landscape painting in the 1950s, and his style underwent a substantial change in the 1980s; this shift was not simply about brushwork or ink, but involved a profound consideration of how the intrinsic nature of Chinese philosophy could be harmonised with the universe, and one of melding subliminal spirituality with the universe. The resultant bold and forceful spirit of nature highlights a revival of the broadness and extensiveness of Chinese culture in days past. Jizi recently opened his first solo exhibition in Shanghai in November 2013 at the 22 Art Center on the Bund.

Xia Xiaowan
Xia Xiaowan (b.1959) has taken destiny and nature as his conceptual focus since the 1980s, exploring the ways in which one’s spirituality is linked with the natural world. His perceptive instinct spurs his continual quest for nourishment in the context of the world at large. He deconstructs Chinese landscapes into three-dimensional “slices”; it is as if hidden cultural meanings have been re-awakened in these seemingly new, transparent artistic landscapes. He has had solo exhibitions at the MOCA (Singapore), Galerie Urs Meilie (Switzerland and Beijing), Today Art Museum (Beijing), and Schoeni Art Gallery (Hong Kong), as well as being exhibited in group exhibitions worldwide.

Zhang Wei
Zhang Wei (b. 1968) is an artist who studied in the former Soviet Union, Russia. When studying European sculpture, a powerful personal driving force was thinking of special ways to express the social, cultural and political changes that China as a country and a society had undergone in the context of Chinese culture rather than Western. Amongst the genres of sculpture, landscape sculpture had never existed, which implied that it was not possible to sculpt a landscape. Zhang Wei, however, after undertaking extensive exploration, made landscape sculpture a reality, establishing it as a unique art form in its own right. It was the product of delving deep into China’s culture, and gestures at how living traditions can be pre-existing traditions that have undergone reflection and re-creation.

Lan Zhenghui
Lan Zhenghui (b. 1959) graduated from Sichuan Fine Arts Institute in 1987, and currently lives and works in Beijing and Toronto. Lan’s monumental paintings and striking use of ink reflect his constant pursuit of expression and feeling. His works are “bursts of emotion on paper” and are characterised by an abstract ink-splash style. His brushstrokes are created by systemic body movements, which contribute to the visual and spiritual impact of his works, evoking the swelling of muscle, blood and physical power. Lan has had solo exhibitions at Sanshang Art (Hangzhou), Pearl Lam Galleries (Shanghai), O House Gallery (Jakarta), National Art Museum of China (Beijing), and the Guangdong Museum of Art (Guangzhou). His work has recently been acquired by the Rubell Family Collection (USA).

Wang Huangsheng
As the Director of CAFA Art Museum in Beijing, Wang Huangsheng (b. 1956) has organised a great deal of influential exhibitions both at home and abroad, which has further cultivated his own artistic consciousness and spirit, moving from traditionalism towards the purity of modernism, and towards the new appeal of contemporary ink. Wang is an artist who pursues the intrinsic stage of Chinese painting, conscientiously building a contemporary visual form; in this is manifested a freedom of artistic substance. He has had solo exhibitions at the National Art Museum of China and the Guangdong Museum of Art.

About Wang Chunchen
Dr. Wang Chunchen is Head of the Department of Curatorial Research of CAFA Art Museum at the Central Academy of Fine Arts China, as well as an Adjunct Curator of The Broad Art Museum of Michigan State University. In 2013, he was appointed as Curator of Pavilion of China at the 55th Venice Biennale. In 2009, he was honoured with the coveted Chinese Contemporary Art Award, which is echoed by the numerous awards he has received for his input in art criticism. The result of this award was the writing and publication of Art Intervenes in Society. With over 50 articles in the past five years published on the many challenge Chinese contemporary artists face has made him a sought after curator. Dr. Wang has also had a great influence on Chinese contemporary art criticism through his translations of over 10 books on art history and theory.

About Pearl Lam Galleries
Founded by Pearl Lam, Pearl Lam Galleries is a driving force within Asia's contemporary art scene. With over 20 years of experience exhibiting Asian and Western art and design, it is one of the leading and most established contemporary art galleries to be launched out of China. Playing a vital role in stimulating international dialogue on Chinese and Asian contemporary art, the Galleries is dedicated to championing artists who re-evaluate and challenge perceptions of cultural practice from the region. The Galleries in Hong Kong, Shanghai and Singapore collaborate with renowned curators, each presenting distinct programming from major solo exhibitions, special projects and installations to conceptually rigorous group shows. Based on the philosophy of Chinese Literati where art forms have no hierarchy, the Galleries are dedicated to breaking down boundaries between different disciplines, with a unique gallery model committed to encouraging cross-cultural exchange.

Pearl Lam Design shows works by established and emerging international designers, including Maarten Baas; Mattia Bonetti; André Dubreuil; and Studio Makkink & Bey, in exhibitions and design fairs around the world. They are invited to push the boundaries of traditional Chinese art and craft techniques and create new works that reflect their experiences in China. A fourth gallery and concept store devoted solely to design will open shortly in Shanghai.