'Self Portrait With a Deer' draws a story about a mental dilemma, the protagonist is trying to escape by adopting the roles and forms of different animals. 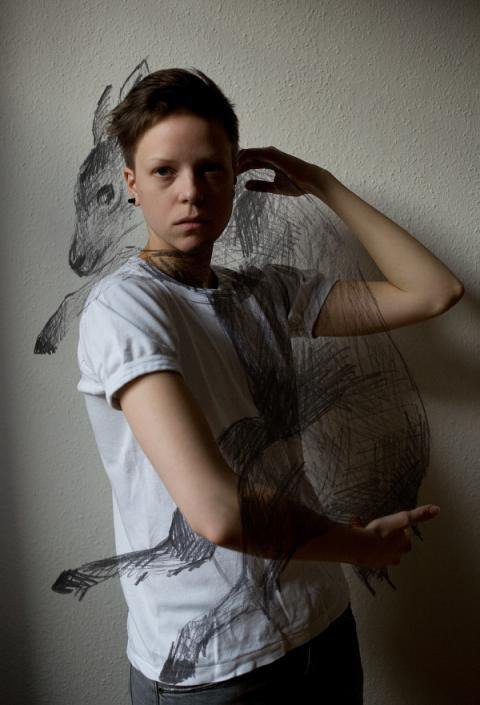 The video draws a story about a mental dilemma, the protagonist is trying to escape by adopting the roles and forms of different animals. After several failures she has to accept her own limitations in order to be able to continue her journey. I use real encounters with animals as metaphors and a frame for the story based on my personal reflections. The name ‘Self Portrait With a Deer’ refers to a photograph which is used as the title of the video. In addition of visual elements, both deal with the connection to wild animals. On the picture I´m holding a deer, on the video a deer represents fear. Video was shot on the location of Kunstraum Bethanien in Berlin on April 2011.

BIO:
Saana Inari (born 1983 in Eura, Finland) works with multimedia installations, video art, animation, illustration, performance and photography – often combining several techniques simultaneously. Her work is dreamlike, drawing strong and continuous inspiration from movement and anatomy. She often incorporates animal figures into her work as metaphors for human feelings and states of being. Using emptiness as a space for thought, she thinks that a sense of poetry arises from leaving things unfinished and subtly surreal. In live installations, she aims at a direct physical and emotional affect on the viewer. She graduated from the Finnish Academy of Fine Arts in Helsinki with an MA in media arts and sculpture. She lives and works in Berlin. http://www.saana-inari.net Duration: 10:48 min Shooting format: HDV 1080/25p Camera: Tiago Bartholo Sound: John Blue Advisor: Simo Kellokumpu Rest: Saana Inari