A Brief History of Artists' Scrapbooks. The exhibition explores how contemporary artists have used the scrapbook to forge an intimate artistic identity, in opposition to the bureaucratic, administrative papers that provide official identification. 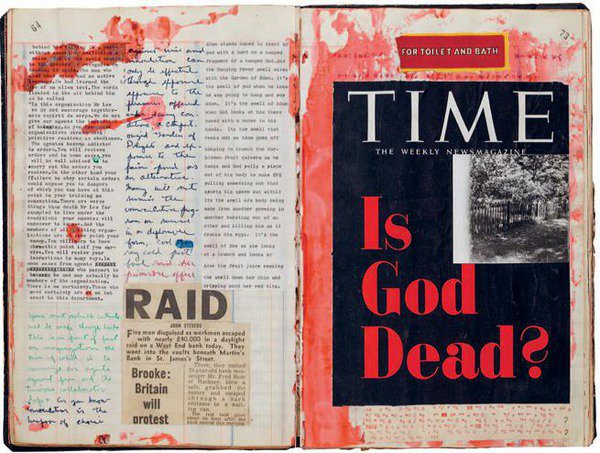 The scrapbook has long been used as a storehouse for memories — to preserve a lock of hair, a sentimental piece of correspondence, a magazine clipping, or a beloved snapshot. Finding a historical precedent in the 17th-century commonplace book, in which bits of scripture might be jotted down alongside literary quotations and recipes, the scrapbook evolved into a highly crafted visual record, a diary not just of thoughts, but also of things. Artists began to engage with the scrapbook in earnest in the postwar period, using the page as variously as the canvas, albeit on a smaller scale. As the title 'Paperwork' suggests, this display explores how contemporary artists have used the scrapbook to forge an intimate artistic identity, in opposition to the bureaucratic, administrative papers that provide official identification.

If the conventional scrapbook originally was a place to store memories, the artist’s scrapbook often trades in nascent ideas, both visual and textual, which may or may not grow into a more finished work. Such books allow an informal view into the process of thinking that goes before making; the collecting that comes before facture. William S. Burroughs and Brion Gysin used oversize books to intertwine visual ideas and threads of stories: news clippings and shards of advertisements woven among watercolor paintings and excerpts from manuscripts — arrangements which fed into Burroughs’s dreams and back out into his cut-up narratives. Other artists, such as Al Hansen, carried small notebooks for organisational jottings, quick sketches, and humorous musings, making collages on the fly and tucking away daily detritus for safekeeping.

But the scrapbook can also be a finished work itself, in which the tightly conceived and carefully constructed sheets form a complete whole. Isa Genzken’s I Love New York, Crazy City is one such example: made during a year she spent in New York in the mid-1990s, the book is a madcap conglomeration of colour snapshots, faxes, and letters affixed to the pages with electrical tape. The French artist Jean-Michel Wicker makes byzantine scrapbooks, often excising pages from store-bought notebooks at the gutter and taping in replacement patchworks of found images, Internet printouts, and hand-lettered phrases. A classic scrapbook purportedly made by Ray Johnson when he was a teenager features kitsch images of babies, puppies, and western landscapes; it was later repurposed in an edition by Brian Buczak, who Xeroxed particular spreads, creating degenerated Pop facsimiles.

Institute of Contemporary Arts
The Mall - London SW1Y 5AH
Exhibitions are open 11am – 6pm, except Thursday, 11am – 9pm