Known for his multi-layered collaged paintings incorporating materials found in the urban environment, Bradford has created a series of works for Sao Paulo that combine abstract imagery with social content. 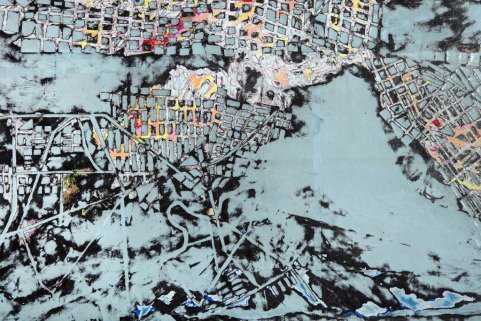 Themes of democracy, power and freedom resonate through the paintings. In My Whole Family is from Philly, an ambitious and complex composition, Bradford has laid numerous layers of paper –remnants of billboard posters found in his neighbourhood, along with digitally-printed colour sheets and newsprint – and partially excavated sections by cutting and sanding into the stratum below. In doing so, he reveals an intricate network of pathways and conduits, along with sweeping passages of exuberant colour, echoing in part the cartographic characteristics of the city of Philadelphia, the location where the US Declaration of Independence and the Constitution were originally signed. Regarded as the cradle of American democracy, the ‘Philly’ (as it is colloquially referred) of the title, provides a backdrop to the geopolitical divisions and social inequalities that continue to shape political debate in the US, referenced throughout the works in this exhibition.

Amendments #5-10 cite the amendments to the US Constitution that were collectively known as the Bill of Rights. In the first of these paintings, text from the revisions, outlining the rights of the people against abuse by government authority, are distinctly visible across a background of expressive, gestural swathes of colour. As the series unfolds, the quotations become more illegible, with only momentary glimpses of text materialising from within the formal abstract composition. Bradford is interested in how the amendments are continually subverted and summoned in ways to control, categorise, divide and restrict people, to the point where the meaning is manipulated and abstracted far beyond its original intent.

The way in which the built environment can also be used as a means of sequestering and subjugation is indicated in works such as The Less Common Royalness and Rest Deep in Curiosity. Vestiges of architectural blueprints and master plans are conveyed in the grid-like compositions of cobalt and turquoise hues, with each small rectangle or square redolent of cramped living quarters in dense urban conurbations. As with all the works, Bradford combines the sublime qualities of formal abstraction with socio-political implication, which he describes as ‘social abstraction’.

Mark Bradford was born in 1961 in Los Angeles, where he lives and works. He has exhibited widely, including groups shows such as the 12th Istanbul Biennial (2011), Seoul Biennial (2010), the Carnegie International (2008), São Paulo Biennial (2006), and Whitney Biennial (2006). Solo exhibitions include, Aspen Art Museum (2011), ‘Maps and Manifests’ at Cincinnati Museum of Art (2008) and 'Neither New Nor Correct’ at the Whitney Museum of American Art (2007). In 2009, Mark Bradford was the recipient of the MacArthur Foundation ‘Genius’ Award. In 2010, ‘You’re Nobody (Til Somebody Kills You)', a large-scale survey of his work was presented at the Wexner Center for the Arts, Columbus, before travelling to the Institute of Contemporary Art, Boston; Museum of Contemporary Art, Chicago; Dallas Museum of Art; and San Francisco Museum of Modern Art. Upcoming exhibitions include the Rockbund Art Museum in Shanghai and the Hammer Museum in Los Angeles.