The name he has given to his exhibition is 'Evidence', a word that will be, a term well known beyond the English-speaking world from American crime series on TV to mean proof that will stand up in court. From his simple but spacious studio on the rural outskirts of Beijing, Ai Weiwei has created a deeply political exhibition for Berlin. 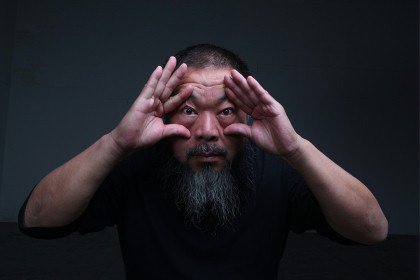 Modernism is the original creation of enlightened human beings, it is the ultimate observation of the meaning of existence and the misery of reality; it keeps a wary eye on society and power; it never makes compromises and never cooperates.
Ai Weiwei 1997 (quoted from “Ai Weiwei - Der verbotene Blog”, Galiani: Berlin, 2011)

In spite of all the hostile oppression he has been facing in his own country, Ai Weiwei has decided to put on his largest one-man exhibition yet at Berlin’s Martin-Gropius-Bau. Across 3,000 square metres, 18 rooms and in the spectacular Lichthof he will display works and installations that were either designed specifically for the Martin-Gropius-Bau or have not yet been shown in Germany.

The name he has given to his exhibition is “Evidence”, a word that will be, a term well known beyond the English-speaking world from American crime series on TV to mean proof that will stand up in court. From his simple but spacious studio on the rural outskirts of Beijing, Ai Weiwei has created a deeply political exhibition for Berlin.

Ai Weiwei is an artist, architect and politician. Very few of his works do not contain hidden allusions to internal Chinese affairs or to the subject of “China and the West” in general. One must learn to spot the ironical historical and political references in his works, which he sends out into the world like messages in bottles.

Ai Weiwei is one of the most internationally renowned artists working today, this did not prevent the Chinese authorities from detaining him illegally for 81 days (81, 2014). He was kept in a cell in a secret prison where the light was switched on for 24 hours a day and he was always accompanied by two guards. He later reproduced the handcuffs with which had shackled him to a chair during his imprisonment from the precious material jade (Jade Handcuffs, 2013).

Random arrests and corruption happen to regular Chinese citizens on a daily basis. Ai Weiwei refuses to accept this status quo. He demands freedom of speech, a fair distribution of power, and multiparty democracy. The infinite variety of forms offered by conceptual art allows him to express his ideas in a country where freedom of expression does not exist.

He is also one of the most famous artists in China. In recent years, official Chinese propaganda has attempted to erase him from public consciousness. He is not allowed to exhibit in any museum in China. Ai Weiwei’s instant response to this tactic was to turn the Internet into his permanent exhibition space: his now banned blogposts are outstanding, as is his current presence on Instagram.

Although he is allowed to work in his studio, a dozen surveillance cameras have been placed before his door. His ironic response was to hang red lanterns on them and reproduce them in marble (Marble Surveillance Cameras, 2010). The actions of the regime have been incorporated into his conceptual art. Although he is allowed to travel within China, every step he takes is monitored by undercover agents. His passport has been confiscated to prevent him from travelling abroad.

Among the works and installations on display at the Martin-Gropius-Bau will be a golden copy of the zodiac sculptures (Golden Zodiac, 2011) cast in bronze (c. 1750) by Chinese craftsmen according to designs by the Europeans Castiglione and Benoist. They formed part of a kind of sun and water clock and were located in a garden commissioned by the Emperor which also featured buildings in the European style. In 1860, after the end of the Second Opium War, the entire garden was ransacked and torched by the rapacious British and French soldiers that had conquered Beijing in order to force China to take part in the opium trade. Some of these bronze zodiac figures found their way to Europe, and when they turned up in Paris in 2008 at an auction of Yves Saint-Laurent’s art collection they caused a sensation in the Chinese cultural sphere. Ai Weiwei does not accept the Chinese government’s stance, that these bronze figures are Chinese national treasures, declaring that, rather, they belong to the whole world.

Ai Weiwei recreates the disputed Pacific Diaoyu Islands (Diaoyu Islands, 2013) in marble taken from a quarry near Beijing for the exhibition at the Martin-Gropius-Bau. Formed from the same marble used by China’s emperors for the Forbidden City as well as by the country’s present rulers for the Mao Mausoleum, his intention is to give an artistic form to a conflict that threatens today’s globalized world.

These instant transformations of current political affairs into art are characteristic of some of the artist’s most important installations. Thus, the twisted reinforcing steel rods recall the terrible earthquake in Sichuan (Forge, 2008-2012; Forge bed, 2008-2012) and the 80,000 lives it claimed and through this, the mismanagement and corruption that exacerbated the disaster. The same can be said of his major work “1,800 Cans of Powdered Milk”, which he exhibited in Hong Kong for the first time in 2013 – a commentary on the scandal that erupted world-wide after Chinese children were poisoned by contaminated milk powder resulting from lax inspections.

Ai Weiwei often uses ancient Chinese materials as well. He has occasionally said, that he wants to provoke an emotional reaction in the spectator by using contradictory elements – for instance, when he dips ancient ceramic vases from the Han Dynasty period (202 BC – 220 AC) in car paint in the same shades as are currently en vogue with the German luxury car owners in Beijing (Han Dynasty Vases with Auto Paint, 2013).

He adopts an equally playful approach both to Serialism, an ancient tradition that can be found in historical Buddhist temples, as well as to Minimalism, which was characteristic of the Song Dynasty period (960-1126). Transferring Chinese art’s traditional and familiar iconography to today‘s “universal language” of globally practiced conceptual art.

In 2008, Ai Weiwei was invited by the Shanghai City Council to construct a very large studio. But upon its completion, the authorities had it instantaneously demolished within a single day, since the artist had dared to criticize the government. But Ai Weiwei created a work of art from his studio’s wreckage entitled “Souvenir from Shanghai” (2012).

In the large Lichthof of the Gropiusbau, the artist has assembled 6,000 simple wooden stools (Stools, 2014) of the type that have been used in the Chinese countryside for hundreds of years, since the Ming Dynasty (1368-1644). The result is an aesthetically pleasing, pixel-like work. These stools, according to Ai Weiwei, are an expression of the centuries-old aesthetic of rural China.

Ai Weiwei is promoting a dialogue with western audiences about China. His revolutionary use of conceptual art began in 1993, after he left New York to return to China, a country which only allowed its artists to use certain forms of expression. After all, whoever controls the form also controls the content. Ai Weiwei resisted this control, creating his own discourse on free speech and freedom to publish. The artists he most admires include Marcel Duchamp, Andy Warhol and Giorgio Morandi.

But Ai also sees himself in the tradition of the Chan (Zen) philosopher Hui Neng (638-713), whom he regards as the radical champion of unlimited expression, a man who rebelled against the Confucian-Buddhist orthodoxy of his time. During the Cultural Revolution (c. 1969), the Red Guards destroyed Hui‘s temple in southern China. His worship however, has since been resumed.

A comprehensive catalogue provides extensive background information on the exhibition with articles by Uta Rahman-Steinert on Ai Weiwei’s treatment of tradition; Wulf Herzogenrath on the artist’s various approaches to his art; Klaus Ruitenbeek on the Chinese element in the work of Ai Weiwei and by Thomas W. Eller on the material rhetoric of aesthetic resistance.

The aforementioned works written italics will be amongst the objects on display. The richly illustrated catalogue that accompanies the exhibition will be published by Prestel Verlag at a special exhibition price of 25 euros.

To the exhibition with the ticket Sparpreis Kultur of the Deutsche Bahn
Have a comfortable journey to the exhibition "Ai Weiwei" and back within three days with the Sparpreis Kultur. The saver ticket starts at € 39 in second class and € 59 in first class. Four further people may join the same journey and save € 10 each. It is valid within Germany and also available for ICE connections.
Children under 15 travel for free if they are accompanied by their parents or grandparents. Please note that the tickets must be purchased at least 3 days in advance and are subject to availability. The Sparpreis Kultur is only available from 1st January, 2014, in combination with an entrance ticket to the exhibition at the DB travel centres and DB agencies within Germany. www.bahn.de/kultur
hide

Martin-Gropius-Bau
Niederkirchnerstr. 7 - 10963 Berlin
Opening hours Wednesday to Monday 10am- 7pm, Tuesday closed
From 20 May daily 10am- 8pm
Admission prices
10 € I reduced 7 €, groups (5 persans or more) 7 € per person
Admission free up to age 16
Combined tickets at reduced prices are available at the counter
Online tickets: www.gropiusbau.de
Audio guide
For adults and children
Tours
Public tours
Sundays at 3 pm (without reservations) , 3 € plus admission per person 7 €
Arranged tours
For groups: Tours in German (60 minutes)
Adults: 60 € plus 7 € per person
School groups: 45 € plus 5 € per person; admission free up to age 16
Tours in other languages: Add 10 €