An exhibition about exhibits and exhibiting. The subjects poses the general question concerning presentability in exhibitions. Works by Marie Angeletti, Michael Dreyer, Giovanni Anselmo, Philippe Thomas and others. 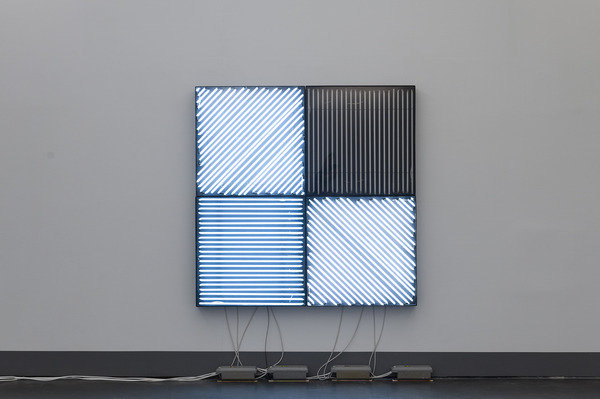 “Les Immatériaux” for Instance is an exhibition about exhibits and exhibiting. It references the now mythical exhibition and publication project Les Immatériaux, which was largely conceived by the influential post-modernist theoretician Jean-François Lyotard.

Controversially received by experts and the public, it is difficult to make a complete and adequate picture of this curatorial experiment today. Even in retrospect, it is nearly impossible to categorise the project realised in 1985 at the Centre Georges Pompidou in Paris under the heading of an art or technology exhibition; its complex contentual themes – the now proverbial “imatériaux” as a description of the technological and epistemic change in our relationship to ‘material’ – can scarcely be reduced down it the lowest possible denominator. Conceived completely in philosophical terms, Lyotard and his team produced Les Immatériaux as a veritable total artwork that even incorporated the educational aspect – for example audio guide, publication and accompanying exhibition program. In this sense Les Immatériaux itself wanted to be comprehended as a work if its philosophical and curatorial scenario on the dialectic of progressive concepts were at all to be directly experienced by its audience as a multimedia shock.

There are several different reasons for taking an exemplary look at Les Immatériaux. The manner in which Lyotard employed the medium of the exhibition to visualise his own theoretical project was – like the future perspective itself formulated within it – as equally relevant as it was unprecedented. However, the influence that the then headlines-making project had on later exhibitions is surprisingly limited. The wide-ranging discourse on the change in art, technology and knowledge at the crossroads to the digital era sketched out back then in the exhibition format and its effects on us rapidly subsided. In the end, the parcours on cultural and contemporary history that deliberately challenged the viewer with works from the broadest possible spectrum including the arts, technology and science was simply just too much ‘exhibition’.

Im conjunction with the present-day trend among artists and curators to make historical exhibitions the subjects of exhibitions, “Les Immatériaux” for Instance poses the general question concerning presentability in exhibitions. Is it not this character of the ‘exhibition’ media that helps to clarify our relationship to the material, the displayed objects and well as the knowledge negotiated within them? Or asked different, what should one really expect from an exhibition?

This project by the Kunstverein für die Rheinlande und Westfalen is as such an aperçu on the curatorial itself. To the extent that “Les Immatériaux” for Instance experimentally combines elements of a study exhibition – a discursive parcours consisting of archive material to the historical object and a selection of original exhibits – with the presentation of current artistic works, the exhibition regularly recalls the moment of ‘presenting’ that admittedly can only be envisioned individually.

“Les Immatériaux” for Instance is the Kunstverein’s contribution to the 2014 Quadriennale Düsseldorf 2014, in which 13 exhibitions under the heading Beyond Tomorrow devote themselves to future artistic perspectives.