He produces works that are an opportunity to discover a subconscious mind inhabited by chimera, rhizomes (as understood by Deleuze) and a fertile profusion of images and ideas. 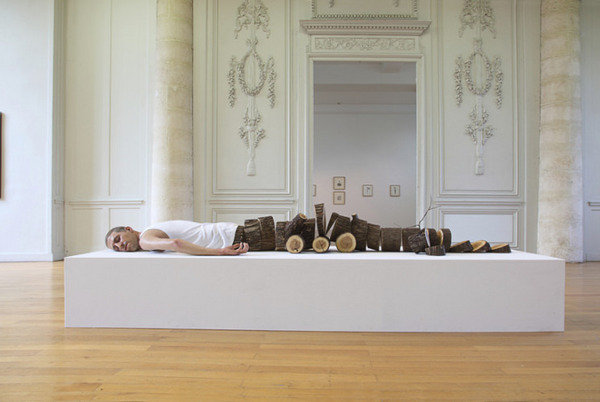 When you first see Fabien Mérelle’s latest works on paper, it is impossible not to wonder whether the artist is in fact inhabited by the spirit of Hegel. If not, then the philosoher certainly exerts a strong influence on him - if that is, the highly-conspicuous presence of contradictory notions and duality in this young artist’s body of work is anything to go by. And yet upon closer inspection, as in Hegel’s dialectic, these contradictions are resolved creating a form of unity which provides Fabien Mérelle with a wide range of possibilities to express himself, to imagine himself as another, without losing touch with his true identity.

His aesthetic abandon, his proximity with the object and aspects of storytelling, as well as his determination to become ‘the other’, all bear witness to Fabien Mérelle’s true nature: a free spirit capable of creating and imposing both his highly-personal imaginary world and a similarity of meaning. In his drawings, Fabien Mérelle invokes unsuspected forces that he controls by crossing swords with his inherent nature, taking the risk of confronting his own contradictions, anger and uncertainty. Giving birth gives rise to pain, but this pain is also synonymous with release.
Like an alchemist’s laboratory, the artist’s studio shelters the manifestations of his wide range of ideas, enabling him to concretise the exemplary passage from idea to creative act: the absolute in terms of differentiation from oneself. He produces works that are an opportunity to discover a subconscious mind inhabited by chimera, rhizomes (as understood by Gilles Deleuze) and a fertile profusion of images and ideas.

In this exhibition, Fabien Mérelle, the explorer of the gesture, draws ever nearer to the subconscious as he lands on previously-untraveled shores and by making the invisible visible touches the very essence of painting itself.