Due to Cornaro's training as an art historian specialised in 16th- and 17th-century Western art, her visual language is strongly associated with forms and compositions from the past, ranging from Baroque and Classicism to Modernist abstraction. 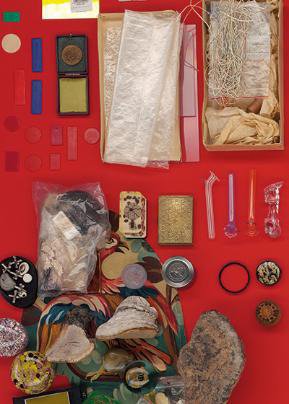 The installations, casts and films by Isabelle Cornaro (b. 1974, France) evince an interest in the way our perspectives are historically and culturally conditioned. Due to Cornaro's training as an art historian specialised in 16th- and 17th-century Western art, her visual language is strongly associated with forms and compositions from the past, ranging from Baroque and Classicism to Modernist abstraction.

In her work, Cornaro plays with the possible meanings of everyday implements and artistic objects by placing them in an entirely new context. Just like in the composition of a classical painting, she groups the objects around a specific theme or arranges them according to size, lines of perspective, light and shadow effects, etc. This profoundly questions our perception of the objects and of her work.

Isabelle Cornaro is part of a young generation of French artists. In her first solo exhibition in Belgium, she is presenting new installations tailor-made to the spaces at M - Museum. In an artist talk with Valerie Verhack, Isabelle Cornaro will elaborate on the new work she has created for the exhibition.

Isabelle Cornaro lives and works in Paris, France. In 2010, she was the laureate of the Prix Fondation d'Entreprise Ricard. Her work has been exhibited in solo exhibitions at the Kunsthalle Bern (2013), White Cube London (2012) and Le Magasin Grenoble (2012) amongst others. She has also been featured in recent group exhibitions at Public Fiction Los Angeles (2013), Fondazione Sandretto Re Rebaudengo Turin (2011) and SculptureCenter New York (2011). Her work is represented by Galerie Balice Hertling Paris, Galerie Francesca Pia Zürich and Hannah Hoffman Gallery Los Angeles.

M - Museum Leuven aims to offer young artists the space and means to create and exhibit new work. The last years M has supported and shown new work of both Belgian and international artists such as Matthew Brannon (2010), Freek Wambacq (2011), Ines Lechleitner (2012), Saskia Olde Wolbers (2013) and Gerard Herman (2013) amongst others. Later this year the museum will show new productions by Belgian artist Adriaan Verwée and American artist Ellie Ga.

At the same time as the show of Isabelle Cornaro, M - Museum Leuven presents Ravaged, an exhibition about cultural atrocities, the destruction of cultural heritage in times of conflict. The exhibition takes a cultural historical approach. In the exhibition M - Museum shows how artists throughout the ages have been inspired by the theme. Hence, reflections and interventions by contemporary visual artists are presented along artworks from the past. The contemporary visual arts contributions are by Adel Abdessemed, Lida Abdul, Sven Augustijnen, Fernando Bryce, Cai Guo-Qiang, Mona Hatoum, Emily Jacir, Lamia Joreige, Michael Rakowitz, Mona Vatamanu & Florin Tudor.