Elephant (Ten Thousand Revolutions per Minute). The artist features an ambitious wall based installation, bold and monumental in both its scale and its block colour composition. 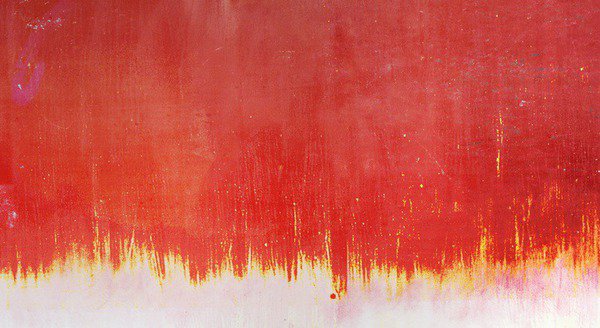 For this exhibition Richard Galpin will present an ambitious wall based installation, bold and monumental in both its scale and its block colour composition. Ten large panels of photographic paper are framed within a steel stud-work structure, projecting from the wall, and extending around two walls of the gallery to a total of 16 metres in length.

Galpin's new work intends to overthrow the tight precision of the previous scalpel-cut photographs, a method for which the artist is well-known. Although still using his own photographs of cities as a starting point for the works, Galpin now uses processes over which he has much less control, creating works that are raw and physical. An electric sander, employed by car body shops and painters and decorators, is used directly on the surface of the photograph, erasing the image, and revealing layers of dye in the photographic paper. This dye is dispersed and mixed by the orbital rotation of the tool and ground back into the surface of the paper.

The photographic information that remains in the image interacts with the surface textures that the artist produces, creating an oscillation between photographic representation and the physical materiality of the object. In some areas the sanded textures create optical effects reminiscent of extreme close-up photography of painted brushwork. In this way the scale of the work contributes to the play between representation and abstraction, and the interplay between painting and photography.

The sculptural support structure is made by the artist from galvanised steel studding, commonly used for internal partitions in new-build construction projects. This is a material that the artist has used in other sculptural works, favouring the light-weight and off-the-shelf nature of the material for its ability to freely realise sculptural ideas in internal spaces.

Certain subtle details in the work tell a complex story of regeneration and renewal. In one photograph patches of bright pink paintwork on a building hoarding show where the logos of various government regeneration agencies have been painted over - agencies which have been created and abolished within the time that the site has stood empty. The Elephant and Castle in South London, which provides the subject of the works - and the title for this exhibition - is an area which demonstrates the impulse to renew by wiping the slate clean. 'The Elephant' has been substantially cleared and rebuilt under previous 20th century schemes (and now a new £1.5 billion regeneration is under way). However at present it is still a place that demonstrates the potency of architectural surfaces to tell the story of previous generations of aspiration and failure. Commenting on the new body of work Galpin writes:

"I've noted a shift in my work from a sense of an explosive revolutionary moment, to an engagement with more cyclical processes of transformation. The new work is concerned with the small ongoing shifts in the environment, planning, and commerce - evolutions in ideology and taste that are embedded in the urban environment and material surfaces. These are the everyday revolutions of the dominant ideologies, translated into the localised strategies of the day, the ones that stick and become part of the urban fabric - and now my work."

Richard Galpin (b. Cambridgeshire, UK, 1975), graduated from Goldsmiths MA (2001). In 2010 he completed a public commission, Viewing Station, for the High Line, the elevated public park on a disused freight track in Chelsea, New York. Galpin lives and works in London.