The exhibition of the 2014 Yale University MFA sculptors features their works developed in the context of an intensive two-year curriculum. In the project space Rene' Smith's work is a sincere ode to longing and the beauty of men's bodies. 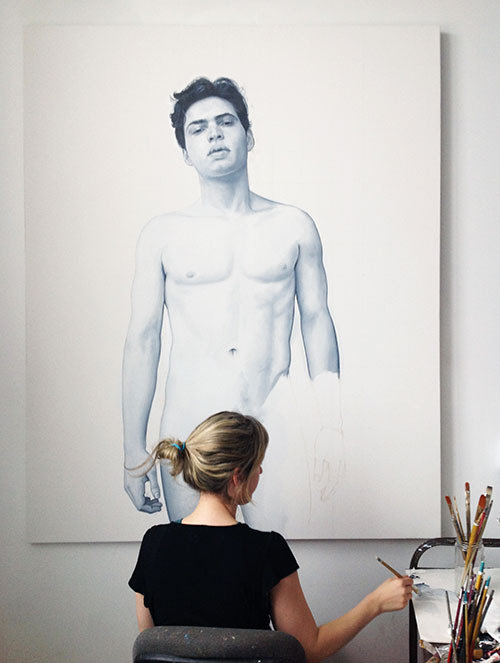 Storefront Ten Eyck is pleased to present an exhibition of the 2014 Yale University MFA sculptors. The artists have developed their work in the context of an intensive two-year curriculum that has bound them together in a close relationship. The conversation between their practices is cryptic at times, but an unmistakable common energy is consistent throughout. The friendships among these eleven individuals have fostered an open, on-going dialogue about their work that is synonymous with their lives.

Blackman is interested in deconstructing fantasy spaces to arrive at new forms. For Halsey, fantasy is used to deconstruct the present realities of her hometown, Los Angeles, and propose new ones. Death and ecstasy are conjured and balanced in Starling’s meditative forms. Kawahito mines materials for their psychological and emotional potential. Using the narratives of architecture, Pinhassi approaches and questions philosophical meaning. Maher often uses a synthesis of performance and sculpture to weave subtle but aggressive stories. Manvi takes cues from science fiction and do-it-yourself chemistry to arrive at uncanny and difficult forms. Hysterically extending the patterns of logic she notices around her, Henry reveals something about curiosity itself. Chou locates the sublime in a rigorous geometry and applies simple gestures to disrupt it. Handley’s work investigates the idea of location as a matrix of questions he employs to understand his identity. Chen’s simple interventions reveal the flimsy nature of reality’s conventions.

The disparate interests of these artists have incubated for the past two years in New Haven. The artists look forward to the opportunity to exhibit their work in the context of the vibrant Bushwick-Ridgewood art community and the broader New York art world.

In the project space:

Rene Smith StudioRené Smith’s paintings, Nude Dudes, are complicated and radical. Forty years after Playgirl popularized the idea that women could enjoy the male nude, we do not expect to see penises. These are feminist paintings. The subject is important, privileged by its relative absence from our visual culture. Smith’s work is a sincere ode to longing and the beauty of men’s bodies, but it also addresses the imbalance between the ubiquitous depiction of women’s bare bodies and the dearth of male nakedness. The paintings depict men’s bodies through a woman’s eyes. The man’s body is presented as a landscape with hills and valleys to roam. The work also abounds in art historical references, our relationship to photography and formal and painterly ideas about the physical and sensual quality of the pieces themselves. Friends and professional models posed for Smith’s camera in her studio. She works from these photographs to create her large-scale paintings.

René Smith was born in Philadelphia and received her M.F.A. in Painting from Tyler School of Art in Philadelphia and her B.A. in Painting from Bennington College in Vermont. She also studied for two years in Rome, Italy. She was a Visiting Lecturer in Painting at Chiang Mai University in Thailand, and has also been an artist in residence at The Gil Society in Iceland, and Vermont Studio Center. She has shown her work at numerous galleries in the U.S. and Thailand including: The Bangkok Art & Culture Center, The Bureau of General Services – Queer Division (New York), The Chiang Mai University Art Museum (Thailand), Aljira Contemporary Art Center (New Jersey), and Brooklyn Arts Council. She teaches painting at St. Thomas Aquinas College and lives and works in Bushwick, Brooklyn, New York.