Bronze in the XXth Century. A survey of masterworks in bronze by leading artists like Arp, Bourgeois, Brancusi, Calder, de Kooning, Giacometti... Featuring more than 30 sculptures, the exhibition will focus on American and European artists with work spanning from Rodin's The Thinker (1880) to Bruce Nauman's Untitled (1996). 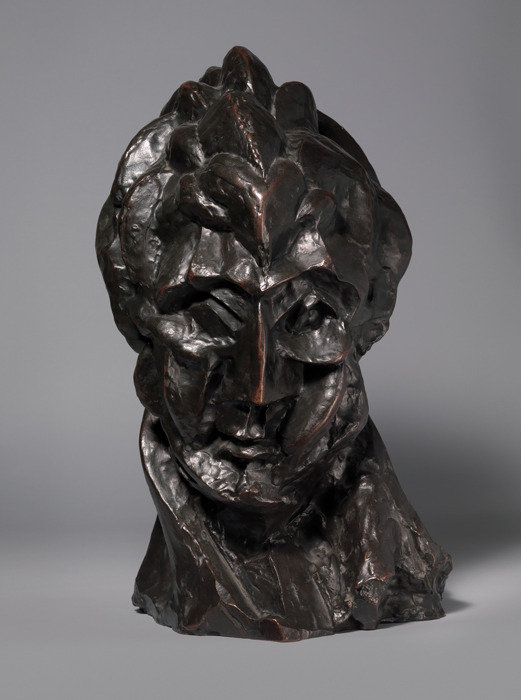 The gallery's presentation is inspired by Bronze, an exhibition curated by Dr. Ekserdjian and Cecilia Treves at the Royal Academy in London in 2012. While Bronze chronicled works from antiquities to the present and was shown only in the UK, Mnuchin Gallery's New York exhibition tightens and deepens the focus of works from a 100-year span during which the medium went through some of its most profound and dramatic changes. The new exhibition will include loans from Glenstone, the Hirshhorn Museum and Sculpture Garden, the Nasher Sculpture Center and the Noguchi Museum, as well as numerous private collections, in addition to select works previously on view in the Royal Academy's Bronze.

"When we saw the show Bronze at the Royal Academy in London two years ago, we were struck by the breadth of inventiveness and the range of visual effects at play in the five centuries of bronze objects that the show brought together. When we learned the exhibition would not be traveling outside London, we decided that the experience of Bronze was one that New York audiences simply should not miss," states Owner Robert Mnuchin.

"From the outset, we decided to deepen our investigation into the twentieth century, when bronze was subject to tremendous transformation," states Partner Sukanya Rajaratnam. "And in the process we made discoveries that suggested how time and time again, this most traditional medium was used in the advancement of modernity."

One of the oldest and most enduring forms of artistic creation, bronze casting has been employed by cultures around the globe for more than 5,000 years. In an age of seemingly infinite media characterized by a driving impulse towards the new, the leading figures of the last century consistently revisited this traditional material. Beginning with Rodin, the masters of the modern and postwar periods probed the medium's historical connotations and techniques while using it to explore new levels of abstraction and contemporary subject matter.

In Rodin's studio, bronze was transformed from a tool of staid portraiture and slick idealization into a vehicle for the artist's deeply personal vision, its tactile surfaces revealing the mark of the artist's hand while its forms expressed highly-charged moments of drama and movement. From then on, bronze was freed from its previous constraints. Brancusi and Arp placed their gleaming sculptures on stone and wood bases of their own creation, while Bourgeois hung her Rabbit on the wall and Nauman suspended his Untitled (Hand Circle) from the ceiling. Picasso, Giacometti and de Kooning reveled in the deep grooves, angles and folds of their expressive surfaces. Moore, Noguchi and Lichtenstein placed as much importance on the negative spaces in their compositions as on their physical volumes. Miro and Ernst depicted fantastical beasts directly from their dreams and imaginations. Johns and Koons created meticulous life casts of functional objects just as they found them. As with these examples, all of the works on view illustrate the diverse and ever-evolving ways in which these artists used bronze to break new ground in the advancement of modernity and re-envision the possibilities of sculpture.

"...it is the twists and turns-the absence of a linear history-that make the panorama of bronze sculpture in the twentieth century so boundlessly fascinating. As a result, no anthology-even when it brings together so many stunning pieces can hope to be entirely representative, but it can instead encourage us to see both the familiar and the unexpected in a new light. For each of us, which bronzes fall into which of those categories will be very different, but even the best informed will be bound to learn from the experience," comments Dr. David Ekserdjian, Professor of Art History, University of Leicester.

Mnuchin Gallery's exhibition will focus on American and European artists with work spanning from Rodin's The Thinker (1880) to Bruce Nauman's Untitled (Hand Circle) (1996).

About Mnuchin Gallery Mnuchin Gallery is located in the historic townhouse at 45 East 78th Street on Manhattan's Upper East Side and is dedicated to presenting museum-quality exhibitions of postwar and contemporary art. Owner and founder Robert Mnuchin, whose passion for the arts developed through his childhood and his longstanding career in the financial sector as head of trading at Goldman Sachs, began a successful second career as a dealer in 1992, forming reputable partnerships with Los Angeles dealer James Corcoran, C&M Arts (1992) and Dominique Levy, L&M Arts (2005). In 2012, Mnuchin and Levy parted ways and the gallery was reborn as Mnuchin Gallery in January 2013.

Mnuchin Gallery carries on the tradition of presenting thoughtfully curated, carefully researched exhibitions, documented with scholarly publications. Its first year of programming included solo shows by some of the most influential artists of the 20th century, including Ellsworth Kelly and Alexander Calder, as well as thematic exhibitions that re-contextualize masterworks from the modern and postwar periods.

Casting Modernity: Bronze in the XXth Century will be accompanied by a fully-illustrated catalogue authored by Dr. Ekserdjian, Professor of Art History, University of Leicester.