Armin Boehm features a new series of works on canvas. Tobias Kaspar's installation 'Holiday' consists of different objects that are characteristic for a fashion store. 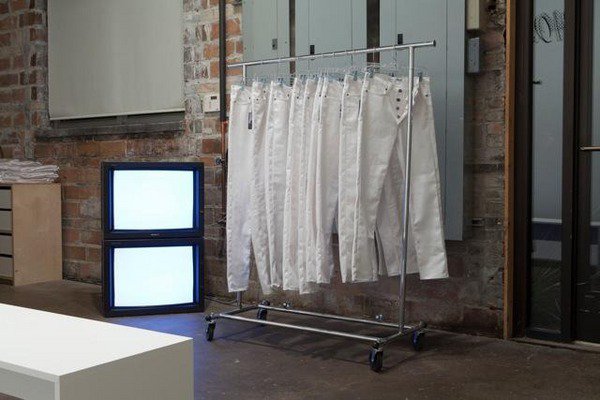 Galerie Peter Kilchmann proudly presents the first single exhibition by Armin Boehm. The artist was first shown in a group show at the gallery in the summer of 2012. The exhibition “Inutile Éternité” now features a new series of works on canvas. The painted interiors, structured densely and crowded with people, alternate between figurative and symbolic presentation. The fragmented views encompass various angles. Combining pieces of fabric and paper with multiple layers of paint Boehm creates vivid image spaces with a distinctive corporeality that dissolves and reappears before our eyes.

Boehmʼs picture worlds reveal specific incidents that seem timeless in their quintessence. Private cocktail parties, scenes on the beach or in public bars stand beside personal moments of seclusion. All are informed by an atmospheric intensity evoking both intimacy and alienation. The vocabulary of modernism is present in both form and content. Boehm adopts the approach of the German Expressionists and their avant-garde literary tendencies. The sense of alienation from oneself and others as well as the question of how the contemporary person is defined in the context of society are central themes. Boehm addresses these ideas with willful painterly means and deliberately placed materials. His painting is a subjective report of sorts – a constructed cosmos of personal experiences and observations.

Embedded in the ornamental patterns of the collaged image spaces, Boehm places lettering and pictorial references from the world of art, literature, fashion or pop culture. One of the works (2014, 200 x 240 cm) is made up of countless fabric, paper and color components. Red and blue tones predominate in varied shades. It shows a group of five people – they are facing each other, posing lasciviously or contemplatively lost in thought, either clothed or half-bared, sitting, lying or standing under a palm tree - on an otherwise deserted beach that stretches into the background of the image. A chain of hills, tree lines and water waves are arranged behind the group. The setting is colorful and the composition highly detailed. The group is equipped with beach towels, stereo and reading material. A protagonist holds a book entitled “Brus” according to Günter Brus, one of the main representatives of the Viennese Actionism of the 60s, which protested against the repressive middle-class authorities with provocations and transgressions. Another reading held by a lying woman alludes to “Wilhelm Reich”, the psychoanalyst and father of the sexual revolution that was once a student of Sigmund Freud. Clearly visible on the ground lies the book “The Moon and Sixpence”, William Somerset Maughamʼs novel from 1919, which deals with the friendship between Vincent van Gogh and Paul Gauguin. Moreover, the background with itʼs imagery and shapes of the sky, stars and trees directly points to van Goghʼs “Starry Night” from 1889.

Armin Boehm was born 1972 in Aachen and studied at the Staatliche Kunstakademie Düsseldorf in the class of Konrad Klapheck and Jörg Immendorff. He lives and works in Berlin. The important single exhibition “The Evil Eye” was shown at Kunstverein Braunschweig in 2009. A catalog was published on the occasion. Armin Boehm was further part of a group show at KW Institute for Contemporary Art, Berlin, in 2013. In 2012 his works were shown in group shows at Stadtgalerie Kiel, Kai 10 in Düsseldorf, Städelmuseum Frankfurt and Goethe-Institute Johannesburg. In 2011 he participated in group shows at Schirn Kunsthalle in Frankfurt and Musée dʼart contemporain (CAPC) in Bordeaux.

Tobias Kaspar's exhibition
The Air on the Way to the Oyster

On the occasion of Tobias Kaspar's exhibition “The Air on the Way to the Oyster”, which will open at Kunst Halle Sankt Gallen on Friday, April 25, Galerie Peter Kilchmann is happy to present Kaspar's installation “Holiday” (2013 ) in the project room. Kaspar designed “Holiday” primarily for his solo exhibition at Midway Contemporary Art in Minneapolis, US, 2013.

The installation, which presents Kaspar's new jeans line “Holiday”, consists of different objects that are characteristic for a fashion store: two dressing rooms, with curtain, chair and mirror, in which the jeans can be tried on. In front of the dressing rooms, a set of jeans is hanging, in all available sizes, on a clothes rail, next to it there is a classic exhibition bank placed. Framed Polaroids, two white glowing monitors and the lettering “Holiday” further decorate the setting, and serve as an announcement and promotion of the new jeans.

A few days before the exhibition opening at Midway Contemporary Art, the institution invited its board members to a preview at which the new jeans – produced by Midway and designed by Tobias Kaspar with fashion designer Joy Ahoulou – were presented in form of a photo shoot. Board members and friends, wearing white “Holiday” jeans, posed in different constellations before the eponymous gas station “Holiday” on the opposite side of the street. The photographs that emerged at this so called “dress rehearsal” are included in a small booklet attached to each pair of jeans.

While for Kaspar's installation at Midway the foyer was remodeled and repurposed in a stage for the presentation of the jeans, the gallery shows “Holiday” in its project space. During the exhibition, the jeans can be tried and are available as limited editions.

The white “Holiday” Jeans collection follows Kaspar's blue jeans from 2012 that were presented in the fashion shop Andreas Murkudis in Berlin.

Tobias Kaspar, born in Basel in 1984, studied at the Hochschule für Bildende Künste in Hamburg and at Städelschule in Frankfurt. He lives and works in Rome. Until May 3, new works will be shown in his first solo exhibition in Brazil at the Kunsthalle São Paulo. In 2013, as in 2012, Kaspar's work was presented in the gallery and 2012 in the Halle für Kunst in Lüneburg in solo exhibitions. His work has been amongst others on view at Artists Space in New York (2013), Palais de Tokyo in Paris (2012), Kunsthaus Bregenz (2011), Hamburger Bahnhof in Berlin (2011) and the Kunsthalle Basel (2011).

The artist wishes to express his gratitude and thanks to John Rasmussen and Megan McCready at Midway Contemporary Art, Minneapolis and all participants at the photo shooting.