Bodies. Twelve new works will be on view mostly executed specifically. A large exhibition space will be devoted to the Mobile (Le Corbusier), a part of the fifth chapter of Architectones project that he has persistently worked on since 2012. 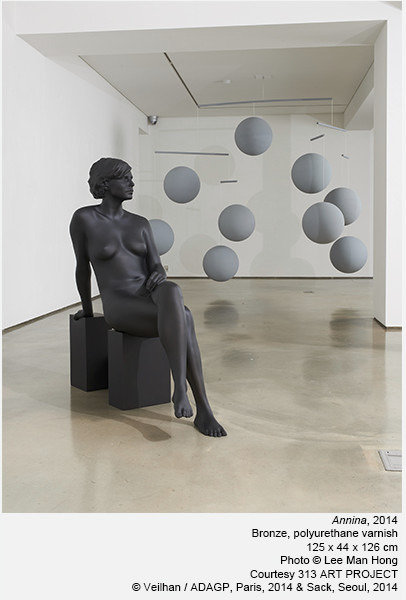 313 Art Project is pleased to present an inaugural solo exhibition of Xavier Veilhan (b.1963) for the first time with the gallery.
Veilhan synthetically introduces a vast realm of art encompassing sculpture, painting, media, and photography into a confined space with his peculiar and sensuous method. He was invited to exhibit at Château de Versailles in 2009 subsequent to Jeff Koons. The Château de Versailles sets a very strict standard in selecting their exhibiting artists. This year will present a solo exhibition of Ufan Lee.

Twelve new works will be on view mostly executed specifically for the exhibition. A large exhibition space will be devoted to the Mobile (Le Corbusier), a part of the fifth chapter of Architectones project that he has persistently worked on since 2012. It is consisted of two parts: a figure and a mobile. The stainless steel human figure is modeled from the worldly renowned architect of the twentieth century, Le Corbusier. It is interconnected with his mobiles that delivers a sense of motion exchange and interactivity. The other part of the exhibition displays various types of his new sculptures. Developing ideas from nudes that were shown at Château de Versailles, six newly created works with different materials, forms, and techniques will be on view creating spatial harmony in depth.

His artistic oeuvre is often described as 'Archeo-Modernism' for his peculiar styles encompasses both sense of classic and contemporaneity. Nonetheless, the nude sculptures still maintain a suggestion of tradition, yet introduce his peculiar process utilizing computers and other mechanic equipment in order to create a nude bearing the mark of the contemporary era. Using various combinations of materials (wood, carbon fiber, bronze, aluminium, etc.) and various processes (foundry, machine milling, molding, etc.), his works play on a different levels of realism and carry both abstract and minimalistic qualities.