Through Marina Abramovic Institute (MAI), the artist will offer a space where anyone can acquire the skills needed for staging and watching long-duration performances. Counting the Rice, from the series of workshop entitled Cleaning the House, aims to develop the participants' endurance, concentration, perception, self-control and willpower. 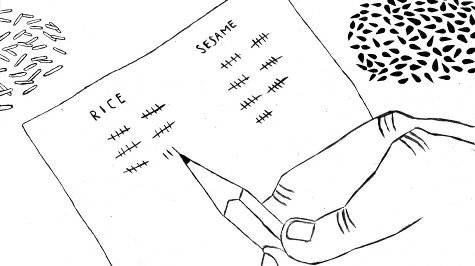 In 1987 the Centre d'Art Contemporain hosted die Mond, der Sonne, the final collaboration between Marina Abramovic and the German artist Ulay before they separated on the Great Wall of China (The Lovers: The Great Wall Walk).
To mark the Centre's 40th anniversary, Marina Abramovic is returning to Geneva where she will occupy a whole floor of the institution from the 1st until the 11th of May 2014 to host an exercise open to the public. The artist’s approach is to teach participants how to cope with the demands of staging long-duration performances of their own via a series of training exercises.

A major figure in performance art, Marina Abramovic has used her own body as the subject, object and medium of her work throughout her career, exploring the notion of physical and psychological limits. In her performances she has withstood pain, fatigue and danger in a quest for emotional transformation.
Turning simple, everyday gestures into ritual is another central part of this Serbian artist's work: standing, lying down, sitting, dreaming, thinking. When incorporated into a performance of long duration, all of these acts reveal a unique dimension, both for the artist and the audience.

Marina Abramovic is currently establishing the Marina Abramovic Institute (MAI) in Hudson, New York. The institute will be a centre for performance and for interdisciplinary teaching dedicated to presenting and preserving long-duration performances, and to promoting collaboration between art, science, technology and spirituality. Through MAI, the artist will offer a space where anyone can acquire the skills needed for staging and watching long-duration performances.

At the workshop at the Centre d'Art Contemporain Genève, Marina Abramovic will have participants to work on Counting the rice, in a site-specific structure designed by Daniel Libeskind and produced by Moroso. The architect is also returning to Geneva, after having exhibited at the Centre in 1987.
Counting the Rice, from the series of workshop entitled Cleaning the House, aims to develop the participants’ endurance, concentration, perception, self-control and willpower. It will allow the public to stretch their physical and mental limits.
Born in Belgrade (Serbia) in 1946, Marina Abramovic lives and works in New York. She began her career at the beginning of the 1970s, and was a contemporary of the generation of performance pioneers that included Bruce Nauman, Vito Acconci and Chris Burden.
Her work in performance, photography, video and sculpture has been shown in solo exhibitions at major institutions in Europe and the USA. Her work has also been shown in several international exhibitions, including the Venice Biennale (1976 and 1997, the year in which she won the Golden Lion for best artist) and Documenta VI, VII and IX in Kassel (1977, 1982, 1992). She has also taught at many institutions worldwide.
Marina Abramovic will be performing at Serpentine Gallery in London from June to August 2014.
Project management: Thomas Berloffa Design Studio.